Mini-Tutorial: Focusing, Tilting and Shifting Your Way to Better Photos

Learn how to put that tilt-shift lens to good use. 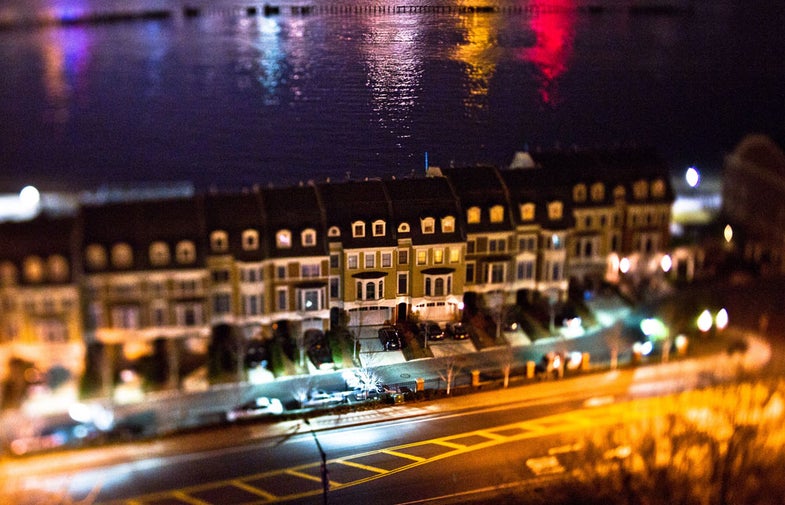 Finding the right focusing point and the right tilt with a tilt/shift lens largely depends on your subject. Let’s take the easiest possible example: patterned floor tiles. Such a subject has a single, flat plane of focus, extending from near to far horizontally from the photographer. Start by focusing on the subject, then use the lens’s tilt feature to tilt the lens forward to align it with the subject plane of focus (per the Scheimpflug principle). When you tilt the lens, you alter the focus point, so you may have to make some additional adjustments to focus and tilt until you find the optimal tilt angle and focus point. Once the proper focal plane is achieved, then everything from near to far should snap into focus, even at wide-open apertures with minimal depth of field.

Things get more complicated when your subject has vertical planes of focus as well as horizontal. Let’s take the woodland wildflower image used to illustrate “Tilt/Shift to the Rescue” in the May ’11 Pop Photo, which has both vertical and horizontal elements, making it about as difficult as it gets when working with a tilt/shift lens. For such a scene, one needs to find a Scheimpflug relationship that takes into account not only the subject’s horizontal near-far elements (the wildflowers), but also the subject’s vertical low-high elements (the trees). I used a small amount of forward tilt to help control depth-of-field, tilting the lens less than in the floor tile example and relying on depth of field more, establishing a compromise plane of focus that cuts diagonally through the scene from near to far. Once I found the optimal tilt angle and focus point, I stopped down to get the depth of field needed to bring both horizontal elements (the receding flowers, near to far) and vertical elements (the trees, from bottom to top) into sharp focus.

A good way to find a starting focusing point is to zero the tilt, then focus about one-third of the way into the subject plane, and then begin tilt trials. This could work well with a fairly simple scene, but with a very complex scene, the initial focus point would be a somewhat arbitrary starting point, and will almost certainly change as you hone in on the proper tilt angle and work out all of the variables.

With some scenes, it’s advantageous to combine shift with tilt. I did this in the wildflower photograph discussed above. I wanted to keep the trees in the image perfectly vertical, but if I tilted the camera down to include the nearest flowers in the frame, the trees would appear to splay away from each other at the top of the frame. So instead, I shifted the lens downward (called “fall” in view-camera parlance) and kept the camera parallel to the trees.

The opposite of fall, called “rise,” would be used in situations where the camera would typically be pointed up, such as shooting tall building or trees. By using rise instead of pointing the camera up, the photographer can avoid convergence of the tops of the buildings or trees caused by apparent perspective distortion. Tilt might be simultaneously applied to achieve near-far focus in situations that have a foreground element that is relatively close to the photographer—for example, a courtyard sculpture beneath a towering skyscraper, or a tall flowering bush set against a forest scene.

Sideways tilt, known as swing, is useful whenever you have a vertical element that starts near and travels perpendicular or diagonally away from the camera plane. For example, imagine that you are standing at the base of a rock face or cliff, which is your subject. Tilt won’t help much, as tilting the lens forward or back will leave part of the cliff face (either top or bottom) out of focus. By swinging the lens left or right, however, you can align the lens with the subject plane to ensure near-to-far focus.

Lateral shift might be used to avoid lateral wide-angle perspective distortion that can cause convergence or divergence of lines, although typically lateral distortion is less of a concern in nature photography than vertical distortion. Lateral shift is more useful for architectural photography, to ensure that parallel lines stay parallel.

Ian Plant, a regular contributor to Pop Photo, is an author and editor of numerous books and articles on nature photography. See lots of his pictures at www.ianplant.com.