How To: Use Perspective to Make Something Small Look Huge

With a little help from a fisheye lens. 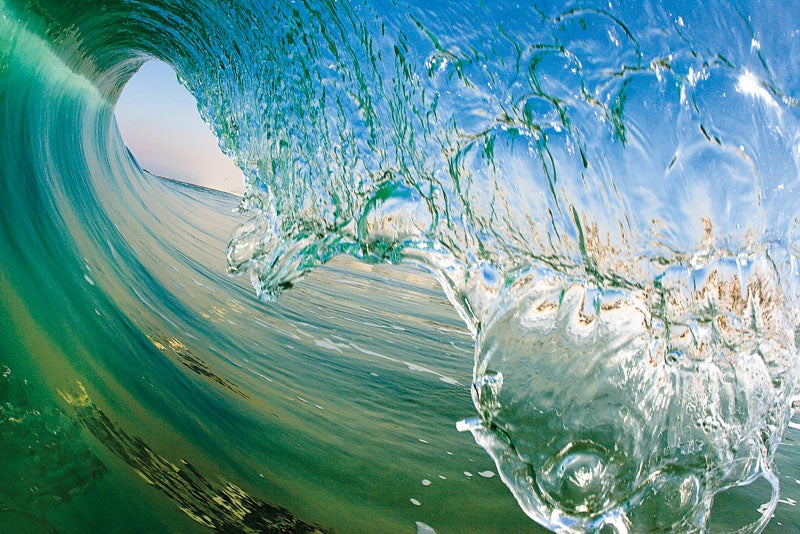 Burkard used a Canon 15mm f/2.8 fisheye on his EOS 20D in a custom fiberglass housing by Dale Kobetich.

You Don’t have to be a surfer to appreciate the mythos of breaking waves. And the bigger the wave, the more awestruck we are. But leave it to a surfer and photographer to capture the ocean’s power in the everyday rhythm of breakers along the California coast. Chris Burkard, a 24-year-old pro from Pismo Beach, CA, visualizes catching waves just right—and because of his background, his body senses where the camera needs to be.

In this shot, “Six Inch Perfection,” experimenting paid big dividends from a tiny curl. “People see these surf images and think it’s a monster wave that required huge efforts to get the shot,” he says. “But this was taken on an average day with mediocre light in Los Angeles at a beach break called El Porto.”

Burkard swam out using swim fins and without a surfboard, carrying his Canon EOS 20D and 15mm f/2.8 fisheye lens in an underwater housing. Noticing the waves doubling up—breaking, then breaking again on a shallow sandbar—he decided to work the barrels created on the second break.

A wave’s impact zone is the place where the lip of a breaking wave lands; just outside that zone is the ideal spot to shoot. It’s also the most dangerous, because the ocean’s current will push and pull you around—you don’t want the wave to break on top of you.

In this case, because he was in such shallow water, Burkard lay on his back with his head and body behind the breaking wave. Only his arm and camera were in the barrel of the wave. “Your hand is your eye, because you’re not looking through the viewfinder,” he says. “Having your hand at the proper angle is crucial. You’re aiming to shoot right out of the barrel, but you’re rarely able to do that.”

This little wave perfectly surrounded the camera and created a bubble effect where the water bursts apart. He shot three frames of it in high-speed continuous mode, of which this image was the second frame. Not knowing he had such a special image, he kept shooting for another couple hours.

“I never expected to get that shot,” he says. “You’ll be shooting sometimes and know a good moment has happened, but in the water you’re more disconnected. It’s so much body language—where and how you have your shoulder and forearm and hand.”

Burkard recommends experimenting. “If in your mind you’re trying to visualize something new or different, and you give it the effort, you’re either going to succeed or fail, but you’re going to learn from that,” he says. “This is one of those moments where everything came together, and it worked out great.”