How To: Take Photos of Sharks…and Survive

With that right gear and attitude, its not as hard as you may think. 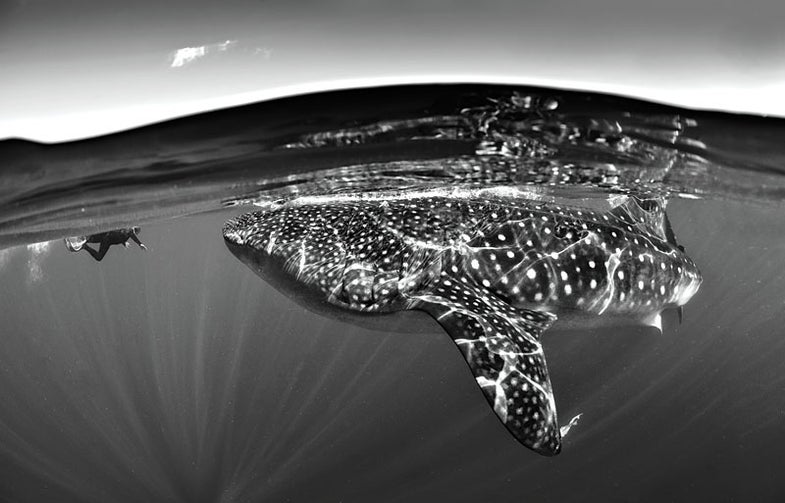 Julian Cohen made this image of a 20-ton whale shark from only a few feet away. He shot it using a Nikon D3, a Sigma 15mm f/2.8 lens and Subal ND3 underwater housing. Julian Cohen
SHARE

Go ahead, throw caution to the wind and shoot to thrill. That’s what retired foreign-exchange trader Julian Cohen and wife, Ildi, did when they signed on for a six-day dive adventure to the Yucatán. His goal? Capturing nature’s biggest fish in stunning pictures.

Up to 40 feet long and weighing as much as 22 tons, the docile, slow-moving whale shark inspires equal parts fear and awe. “For me, any time I can get so close to such a massive animal, it fills me with wonder and elation,” says the Singapore-based Cohen. “They’re real gentle giants, though, and represent little danger. They’re also easy to find if you join a dive trip organized around their life cycles.”

Whale sharks are filter feeders, sucking in seawater filled with tiny prey. They gather to feed on algae, plankton, krill, and fish eggs en masse at warm-water locations around the world. Closest to the U.S. is the Isla Mujeres off Mexico’s Yucatán peninsula.

“The sharks aggregate in July and August, and can number as many as 500 in one area,” Cohen says. “When they’re in, up to 40 boats per day ferry tourists and divers out to them.”

You don’t need scuba gear—in fact, it’s not allowed in many places where whale sharks gather. Snorkeling with an underwater compact, you could take home great pictures and wonderful memories, too.

**Follow Julian’s steps below and you too can make incredible shark photos:

** Step 1: Find an organized dive tour.
Websites such as the Isla Mujeres tourist board (www.isla-mujeres.net) and the annual Whale Shark Festival (www.whalesharkfest.com) are good. Since each boat is allowed only three divers in the water at a time, pick tour companies with smaller boats. Also, look for tours that stay out longer, offer on-board food and drink, and have bathrooms.

Step 2: Gather your photo gear.
A waterproof compact will work, but a DSLR is the smarter choice. Pick one that has acceptable noise levels at high ISOs and for which you can buy or rent a dedicated underwater housing. Because your subject is massive, an ultrawide or fisheye lens is a must.

Step 3: Watch your lighting.
Only snorkelling is permitted, so you’ll be working close to the surface. Put the sun at your back, so the shark is frontlit. Get close, so you have as little water between you and your subject as possible. “Don’t worry,” says Cohen. “They usually won’t bump, touch, or swipe you. To get a little closer, I hold my camera housing at arm’s length.”

Final Step: Clean up in postproduction.
Plan to remove tiny debris floating in the water, as well as to tweak contrast and white balance, in an image editor. Cohen converted his image to black-and-white because it exaggerated the distinctive body markings of this monochromatic monster.