How To: Make an Image in Spotty Lighting

Gage Young photographs a musician in a tough lighting situation. 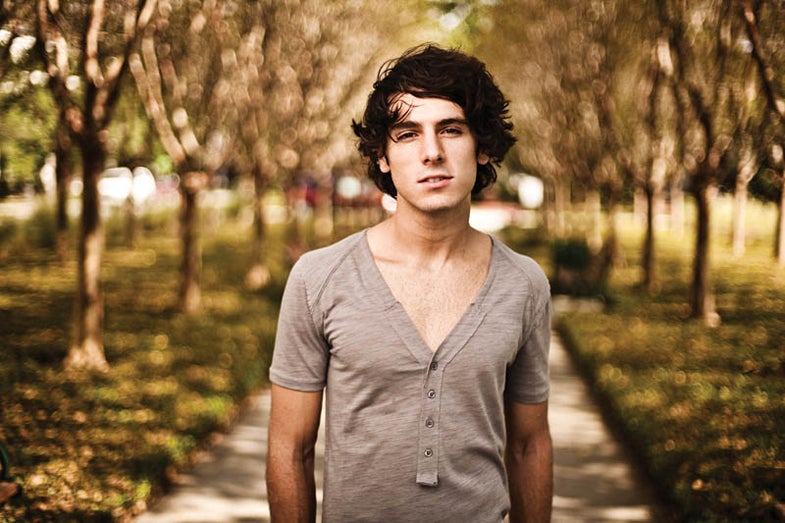 In the summer of 2009, Orlando-based pro Gage Young was photographing rising singer/songwriter Dave Melillo against a receding allée of trees along a length of sidewalk in Celebration, FL. While graphically interesting, these trees broke up the sunlight into dappled hot spots and shadows, creating too-bright blotches on Melillo’s forehead and sections of his shirt while rendering most of his figure a featureless black. Young’s solution:

Evenly light the subject.
He did this by throwing the musician completely into shade, which eliminated the contrasty pools of light. A 36×42-inch panel of black foamcore board clamped to a lightstand next to Melillo did the trick. Standing in the shadow of this board, Melillo lost the blotches. The strategy introduced a new problem, though: Now in shade, the musician was several stops darker than most of the background. Adding exposure to brighten him would have rendered most of the scene an unacceptable blown-out white.

Balance subject and background.
To bring the exposure on his subject up to the brightness of the background, Young lit him with a 320-Ws strobe. Its output, diffused through a 24×36-inch softbox, produced a bright, natural, and flatteringly soft illumination.

With the strobe’s intensity perfectly matching background light levels, however, Young’s subject blended in too much with that background. The fix? The photographer incrementally bumped up strobe output until the resulting exposure dimmed down the background slightly and Melillo became the picture’s unchallenged subject.

Defocus the background.
Next, Young used another technique to pop his subject: He tried to defocus the background by shooting with a large aperture. Setting his Canon 50mm f/1.4 to f/1.6, though, grossly overexposed the background, even at ISO 160. The solution was stacked neutral-density filters, which cut down the light hitting his sensor by 4 stops, letting him shoot at f/1.6 with perfect exposure and an attractively defocused background.