How To: Clean Up a Background Using Symmetry

A distracting background can seriously detract from even the most beautiful or interesting subject. But, with a little help from Photoshop, it's possible to take the edge off of an annoyingly cluttered image. 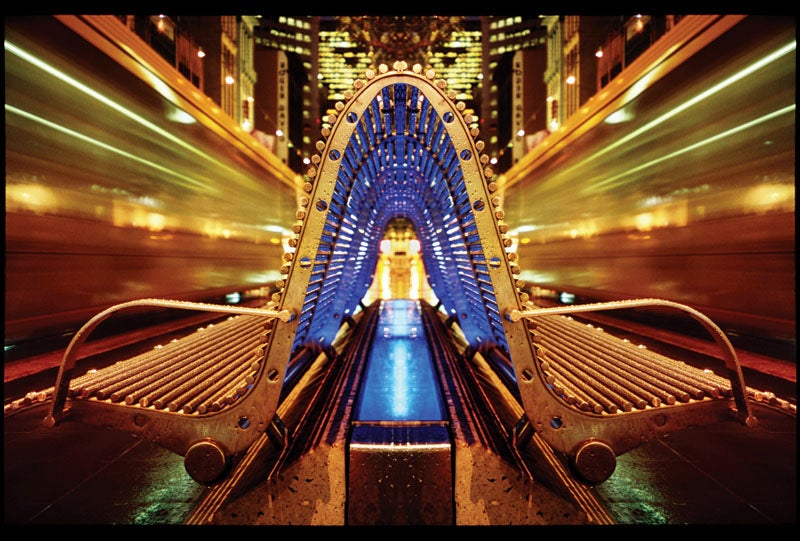 Swallow made this study of converging lines with a Minolta Freedom Zoom 160 film camera. He then scanned the image with an Epson V700, and edited in GIMP 2.6.8

Photographers have lots of tricks for dealing with clutter and other unwanted picture elements. You can, for example, set a large aperture to defocus the fore- or background. Or, by brightly lighting a foreground subject, you can set exposures to darken background mess until it essentially disappears.

Jesse Swallow of Melbourne, Australia, offers a less common technique that works especially with heavily lined subjects. Waiting for a Melbourne tram one rainy August evening, he was struck by the dynamic contrast of richly saturated warm- and cool-toned light reflecting off a metallic bench. When he composed the scene so that the reflections were their brightest, however, the right side of his picture was a line of ugly storefronts.

No problem! He used software to crop out the storefronts and replace them with a mirror image of the scene.

The technique solved the storefront problem, and, because his subject was largely receding lines and movement, the photo has a fun and vortexy depth, too.

Editing
How to
Photoshop
Processing