Behind the Lens: Life as a Nature Photographer

Ingo Arndt is a professional photographer and wildlife specialist. 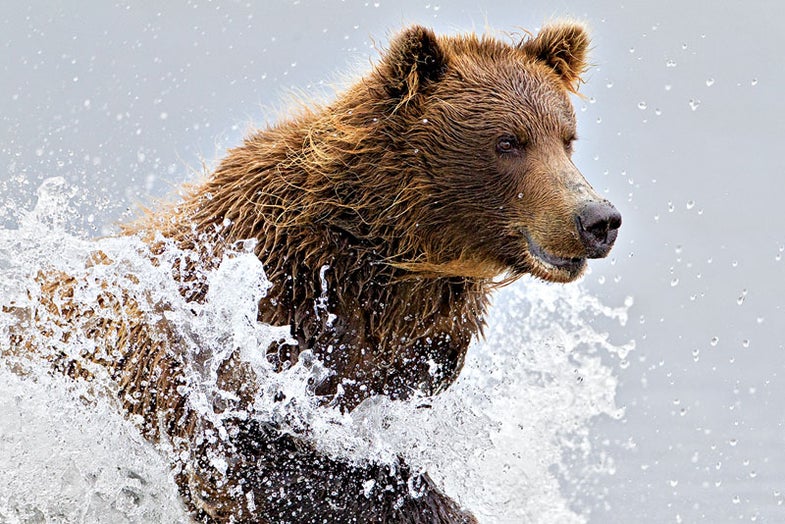 GRIZZLY BEAR "When they're chasing after salmon, it's safe to get within 20 feet of these bears," says Arndt. "They focus completely on the fishing and are oblivious to you." Made in Lake Clark National Park, AK, with a Canon EOS-1D Mark IV and 500mm f/4L lens; 1/1000 sec at f/4, ISO 1250. Ingo Arndt
SHARE

Ingo Arndt, 42, a wildlife specialist and contributing photographer to the German edition of Geo magazine, spends more than half the year on the road, photographing animals everywhere from Alaska to Antarctica and beyond. He took a few hours recently to share insights with Senior Editor Peter Kolonia.

How did you start out?
My father was a bird watcher, and when I was a boy we often would go out on weekends. At first, I just wanted something to remember the birds by. Gradually, though, I wanted pictures that were as beautiful as the birds themselves: sharp, with good color, eye contact, and poses or body language that looked right. Especially for the birds that fascinated me.

The first were kingfishers that lived in the forests near my home in Frankfurt. They had more colorful plumage than most birds I had encountered, and it was fun to watch them dive from a height, plunge a meter into the water, and come up with small fish.

Now, almost 30 years later, I still photograph them every chance I get. Back then, though, when I told my parents I wanted to make my living photographing such animals, they laughed. There were maybe five professional wildlife photographers in all of Germany.

How do you make a living?
I diversify. I shoot landscapes for calendars and posters. Income from my wildlife is divided between stock photography and editorial work assigned by magazines like Geo. I also create exhibition projects like the “Animal Masses” show that’s traveling around Europe now. It has over 40 large-scale prints of massive groups of animals, from which I sell prints, posters, calendars, and cards. Several of the pictures you’re publishing here [like the penguins, opposite] were taken for “Animal Masses.” It was a very expensive undertaking, and before I started, I visited publishers, printers, magazine editors, museums, and galleries with sample images to see if there was interest. There was, and it’s been a success.

How did you get the idea?
It all started when I was assigned to photograph the lifecycle of monarch butterflies. I traveled across the U.S. photographing them on the East Coast during the summer, and then following them to Mexico in the winter. There I saw unbelievable numbers of monarchs—almost 400 million wintering in one location. It got me thinking about other animals that migrate or mate by the thousands.

What are your favorite animals to work with?
Mountain gorillas. They’re so human-like that you can watch them for hours. From their expressions and body language, you can sense what they’re thinking and feeling—much more so than other animals. It’s fascinating how close they are to us. They’re big and strong, but gentle, too. I’ve photographed them maybe 25 times over the years, at distances of usually about 20 feet, and I’ve never felt threatened.

People often ask me what the most dangerous animal is. They’re surprised when I tell them it’s not lions, tigers, bears, or gorillas. For me, it’s the mosquito. I can’t afford a case of malaria. And also people, especially in big cities.

What’s the most difficult animal to photograph?
Monkeys. They never really look in your direction, they don’t want to make eye contact, they’re often shy, and most of them live deep in the rain forest, where it’s usually hot, with high humidity and lots of insects. It can be hard to find them, and the light in the rain forest is usually dim. If the sun is shining, the lighting can be very contrasty. The best conditions are under a light cloud cover that diffuses the sunlight but doesn’t weaken it much. This can be hard to find. Many monkeys and the mountain gorillas, too, are black. It’s hard to get light in their eyes. Also, if you want texture in the black fur, you have to add so much exposure that the the backgrounds often get blown out.

The easiest?
If you want to impress someone, close-ups of insects often work. Most people aren’t aware of how colorful and visually fascinating and unexpected insects are. People aren’t used to seeing them with any kind of detail. Great pictures of elephants, eagles, or grizzlies aren’t easy, because they’ve been over-photographed. I haven’t seen a surprising picture of a lion in a long time.

What gear do you take?
As little as possible! It’s important to travel light. I research subjects before I shoot. I talk to other photographers, and determine what’s the smallest amount of equipment I can bring and still get the shot. When I go out, it’s often for a specific image that I’ve previsualized, and I know exactly what gear I need to get it. For outings that don’t have a specific subject, I travel with a wide-angle zoom, a 100mm macro, a 70–200mm f/2.8, and a 400mm or 500mm tele, plus a 1.4X teleconverter and tripod. My backpack usually weighs a little over 30 pounds, including DSLRs.

What’s your typical workflow?
My only issue with digital is the amount of work it requires in the field. In the film days, I would go back to the camp or the hotel after shooting all day, and enjoy a bottle of beer. Now, I go back and check my files, back them up to a portable hard drive, sometimes burn DVDs, and delete the ones I don’t want. I would say 80% of my files get deleted, and it can take hours. I was recently in Australia for a month, and I shot 6,000 to 7,000 pictures. I brought home only 200.

On the road, I store my images on a laptop and on a LaCie external hard drive, which I keep in a shock-absorbing case. I stash each in separate places—one in my backpack, for example, and the other in my hotel room safe. I travel with about ten 16GB high-speed SanDisk cards, and I keep the images on them until I’ve filled all ten. Then I reformat and reuse them as needed.

What’s the hardest thing about being a wildlife pro?
Getting started. You have to shoot, shoot, and shoot until you’ve got a good number of stock images. Then you have to market them. You have to be inspired and fascinated by the animals, and obsess about seeing and experiencing them. It’s not about equipment. Some people think they get better pictures with expensive equipment, but the logistics of shooting is more important than the camera you’re using. You learn animal behavior, how to find and light them, and how to find or create the conditions that produce interesting or photogenic behavior. All these things take time, research, and trial-and-error-type practice.

When I was starting, I was out shooting every free minute I had. If you don’t find the process fun, it can be very hard to get established. To make a living, you have to always make something new. You can’t get by reproducing what you or others have already done.

Do you have some general tips for shooting wildlife?
The most important thing is to know your subjects. If you observe an animal long enough, you can predict its behavior—and that’s when good pictures happen. With the kingfishers I’ve photographed for years, I don’t need an infrared flash trigger to catch their dives. By their body language, I know when they will dive, and often I can catch them as they hit or emerge from the water.

It’s important to research your subjects, and know something of their lifecycles, behaviors, habitats, and idiosyncrasies. Also, when you travel, don’t go alone. Use guides or tour groups who can help you keep safe, and be at the right place at the right time. Make sure the guide or tour group specializes in the animal you’re most interested in.

Last, be patient. You have to be okay with the fact that it often takes hours, days, or weeks to get a picture that really means something.

Ingo Arndt, one of Germany’s busiest wildlife photographers, has images in publications and museums worldwide. For more, visit www.arndt-photo.de__.