Dave Jordano uses the frozen Mississippi as a daylight studio. 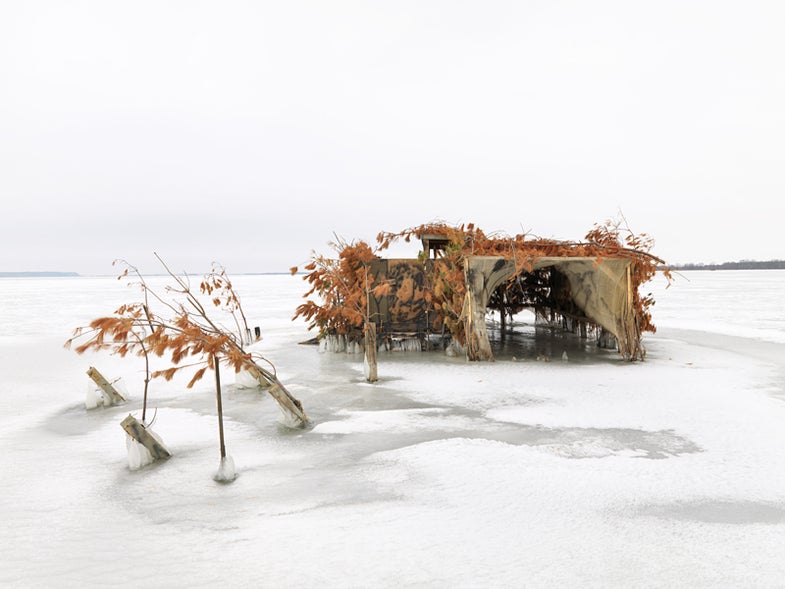 This winter seems to have turned America into a big white seamless. Snow after snow has smoothed the edges of the great outdoors into a cyclorama, complete with built-in reflectors and abundant fill light. All it takes to use it is the courage to step into the unrelenting cold, camera in hand.

A couple of winters ago Dave Jordano packed up his photo gear and headed West from Chicago, his home base, to the frozen Mississippi. There, on the solid ice along the river’s edge, duck hunters set up blinds for their own, more intrusive kind of shooting. Why sensible ducks would be fooled by these structures is another matter, but Jordano was drawn to their quirky construction—a mix of tree branches, burlap, reeds, and construction leftovers. So he set up his 39-megapixel Hasselblad H3D II to capture the blinds he liked the most.

Jordano, a former commercial photographer who now devotes himself to fine-art work, took his icebound subjects beyond mere landscape. In fact, it’s almost as if he shot them in a studio: The blinds sit centered on the white seamless formed by frozen river and always overcast sky, illuminated by the unvarying light of a cloudy softbox, vivid in color and detail. Jordano’s consistent treatment and the lack of distractions directs all attention to their shape, textures, and earthy palette—the latter making far less sense in a blank expanse than it would in woodlands. His approach recalls that of Bernd and Hilla Becher, who found endless subtle variation in cooling towers and other industrial structures. “Each blind possessed a style and character all its own, even though the hunters had to adhere to the same basic construction principles and materials,” Jordano comments. “The end results, while utilitarian in purpose, are always playfully creative and original.”

Jordano reports that the Illinois Department of Natural Resources has since cracked down on the building of duck blinds, limiting their number though a lottery and requiring that they be dismantled at the end of the hunting season. Whether that regulation will have any environmental impact is hard to say, but it assures one thing: that Dave Jordano will have an endless supply of quizzical, whimsical duck blinds to photograph.