How To: Light an Outdoor Location with Strobes 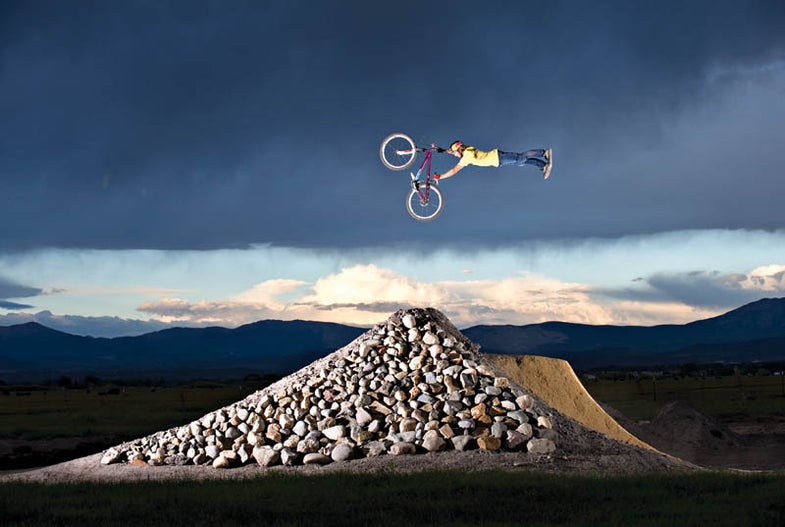 Lighting illuminates, sure. But that’s not all. It can suggest shape and dimension, draw attention to specific subject details or qualities, freeze action, or separate your subject from the background. In this amazing image by Scott Markewitz, it does all of these things.

Markewitz, based in Salt Lake City, UT, and Provence, France, is a ski, action, and adventure specialist. He was hired by helmet maker Giro to photograph professional mountain biker Paul Basagoitia doing a “Superman Seat Grab,” as the trick is called.

By carefully lighting both his subject and the scene, Markewitz managed to…

Focus attention. Notice how Markewitz lit only the track and ramp, while throwing the fore- and backgrounds into dark shadow. He did this by focusing the Ranger A heads’ output through narrow, 50-degree High Performance reflectors. Not as pinpointed as a snoot, but with a significantly tighter beam than normal 65- to 95-degree Elinchrom accessories, the High Performance reflectors let him selectively light only those areas that he deemed important.

Separate subject and background. By firing up his lights to produce output that was brighter than the ambient light, Markewitz was able to set an exposure that would render the clouds as dark, causing his subject to pop from the distant background.

Suggest shape. By backlighting the ramp that catapulted Basagoitia skyward, Markewitz highlighted and underscored its curved shape, which helps convey something of the biker’s thrilling trajectory.

Scott Markewitz (www.scottmarkewitz.com__) has more than 400 magazine covers to his credit.

Lighting How To
Photography Tips
How to
lighting
Outdoors
Shooting
Sports