John Isaac: The Passion of a U.N. Photographer

How this former photojournalist went from shooting the dark side of humanity to capturing the radiance of the world's wildlife. 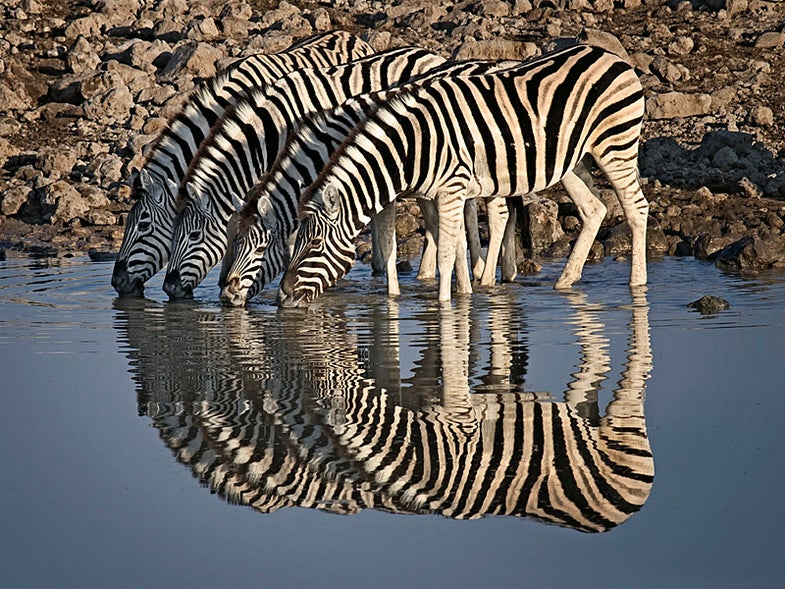 Zebras line up for a drink at a watering hole in Namibia's Etosha National Park. John Isaac
SHARE

At this very moment, John Isaac is probably somewhere in the brush of India’s Bandhavgarh National Park, waiting patiently for his beloved tigers to give him another photo op. He has lost count of the number of trips he has made in recent years from his home near New York City to the massive parks of his native India. But all those journeys will culminate in a monograph of Isaac’s tiger photographs to be published in late 2011. The trips have been completely self-funded, driven by Isaac’s wish to call attention to the almost irremediable damage that poaching has done to Earth’s most magnificent cat.

It helps this time that on his way to his appointment he had a paying assignment—to photograph the wedding of the Maharajah of Jodhpur, attended by the likes of Mick Jagger and Sting along with a host of Indian dignitaries. Isaac had mixed feelings about the job. “What a celebration,” he writes. “Seven days of feasting and parties and fun. But deep down my conscience was not so happy with all this glitter and glamour, since I know there are millions of Indians going hungry.”

That sensitivity to, and abiding awareness of, the suffering of others led Isaac to a dramatic career change in the late 1990s. Back then he was chief photographer at the United Nations, for which he had traveled to more than 100 countries over two decades to shoot the death and destruction of human conflict and natural disasters. He bore witness to Pol Pot’s Cambodian Killing Fields, the Iranian Revolution, and the Ethiopian famine of 1984. But the Rwandan genocide of 1994 pushed him over the edge—into an emotional abyss that made him realize he just couldn’t do that kind of photography anymore. Indeed, Isaac’s emotional involvement with his subjects, and his impulse to help them rather than use them as tools of photographic advocacy, may have made him less successful as a photojournalist. By his own admission, in tough situations he sometimes lacked the resolve to get the best picture at any cost that drives photojournalists such as Jim Nachtwey or even Sebastiao Salgado.

Not long after he resigned from the U.N., Isaac had a reawakening triggered by his lifelong love of the natural world. Shifting around the same time to digital capture, he began to photograph wildlife—perhaps an antidote to the toxins of human rancor that had built up in his psyche. With a few detours—among them to Kashmir, where he shot the daily life and natural landscape of that contested territory to show that peace is possible anywhere, work that was published in a 2008 book—he has been shooting wildlife for over ten years. His main camera in the last few has been the Olympus E-3, though he has switched recently to the new Olympus E-5, and confesses to using and loving the Olympus PEN for its light weight yet ability to take interchangeable lenses. “The Four Thirds system is great for wildlife because it doubles the effective magnifying power of my lenses compared to what I’d get with a full-frame camera,” he explains.

The gallery of Isaac’s wildlife photographs presented here is made up mainly of unpublished work, and celebrates his recent news that the George Eastman House will establish an archive of his life’s work. Isaac is also the subject of a feature in the January/February issue of American Photo, available now at newsstands. The profile tells the full story of Isaac’s journey into the darkness of human degradation, then back into the light of Mother Earth.

How about: John Isaac spent two decades as chief photographer for the United Nations, documenting some of the world’s most horrific events:

Refugees from the Rwandan genocide who have died from cholera are trucked away for burning, in Zaire, 1994.

An orphaned child with AIDS peers through a door at a UNICEF shelter in Windhoek, Namibia, 2002.

Rwandan refugee children scrape a barrel for food, 1994, from one of Isaac’s “saddest assignments.”