Festival features an impressive series of lectures given by some of the world’s top photographers. 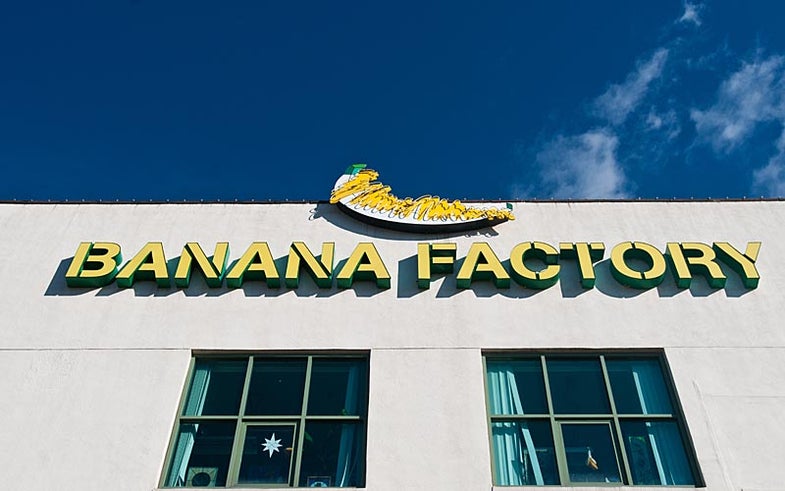 The Banana Factory in Bethlehem PA was the site of the inaugural InVision Photography Festival. Dan Bracaglia
SHARE

This past weekend, the staff of American Photo had the privilege of co-sponsoring and participating in the inaugural InVision Photography Festival and college photography competition held at the Banana Factory in Bethlehem PA. The festival spanned three days and featured a showcase of images submitted to the competition by college students as well as interactive talks given by some of the world’s most talented photojournalists and commercial photographers.

The event kicked off on Friday with a talk given by commercial/artistic photographer Larry Fink. The following day brought a series of interactive lectures presented by what can only be described as a dream team of photographers including National Geographic Photographer Nick Nichols and Magnum photographers Alex Webb and Peter van Agtmael. The talks wrapped up Sunday with presentation given by the ever-charming and unbelievably talented former photographer for the United Nations, John Isaac.

The crowd for each of the lectures was highly involved. Seating capacity for many of the lectures was quite limited and the majority of the events were filled nearly to capacity. With events like “Magnum and Microbrews,” we wouldn’t be surprised to see the turnout of the festival quadruple in size by next year, for this festival is truly one of the best kept secrets in the photography world.

The Banana Factory, Bethlehem’s premiere cultural arts and education center, also played the perfect host to the festival, offering ample space, amenities and just an all around incredible experience for each of the attendees and lecturers.

For those of you who missed out, next year’s convention will be held at the newly constructed Banana Factory annex and is likely to feature an equally as impressive array of guest lecturers and student work. We will certainly keep you updated as the events roll around.

For more information on the event please head to the InVision site.

Also, if you missed the convention, we highly recommend you check out the work of each of the speakers, we promise that you won’t be sorry:
Larry Fink
Nick Nichols
Alex Webb and Rebecca Norris Webb
Peter van Agtmael
John Isaac