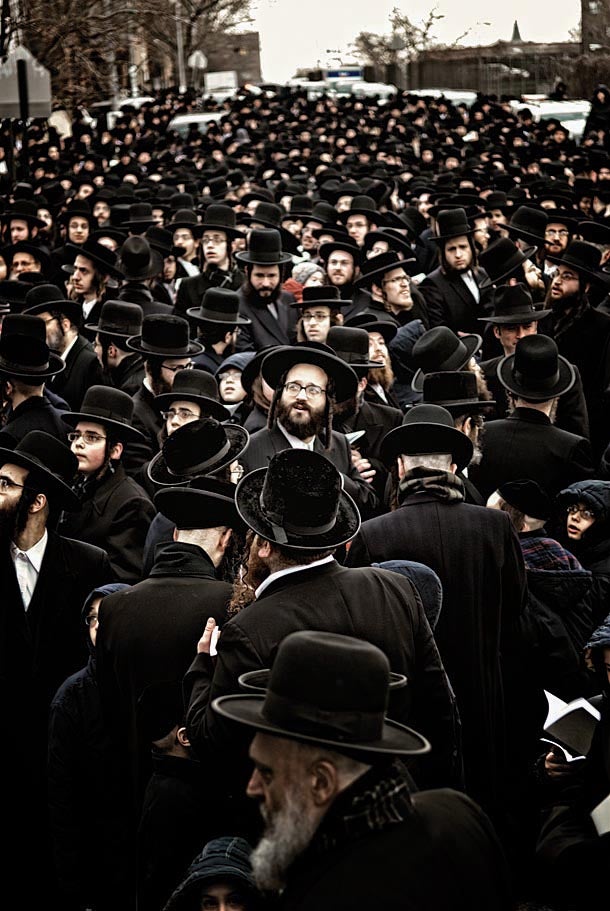 I moved to New York City in 1996, and for the past five or six years I’ve spent a lot of time photographing Brooklyn. I’m interested most in the different communities in various neighborhoods. Though I’ve been interested in the Hasidim in South Williamsburg, I haven’t had many opportunities so far to photograph them. Many of their events are memorial, and many exclude film or video equipment.

One spring weekend in 2009, I woke very early and heard a news report about the Sun Blessing, an event that’s very significant to the community. It only takes place once every 28 years—it’s based on a cycle recorded in the Talmudic calendar, and according to their faith it signifies the solar anniversary of the beginning of the world. Seeing that it was very near to where I live, I jumped on my bike with my Nikon D200 and 17–55mm f/2.8 Nikkor lens and headed over.

I arrived near 5 a.m., just before the gathering started. For the first couple of hours I just spoke to the people who were arriving, asking them questions. No one minded me being there, and I think that it helped that it was a celebratory event—they were mainly waiting for the Grand Rebbe to arrive and hear him speak.

They’d erected a platform for him, about 10 feet above the crowd, and at some point someone said to me, “Do you want to go up there? He’s not here yet, so you can take some pictures.”

The men helped me climb up. It was an ideal vantage point, and it was an overcast day, which made it easier to shoot with just available light.

But soon it got crowded and, since I didn’t have any other way to exit, I climbed down to a flatbed truck that was supporting the platform, and that’s where I took this photo—right before the Grand Rebbe appeared to speak to them about the Sun Blessing.

I like photographing in Brooklyn because I like learning about the different people who live there, but also because I like having the opportunity to interact with them.