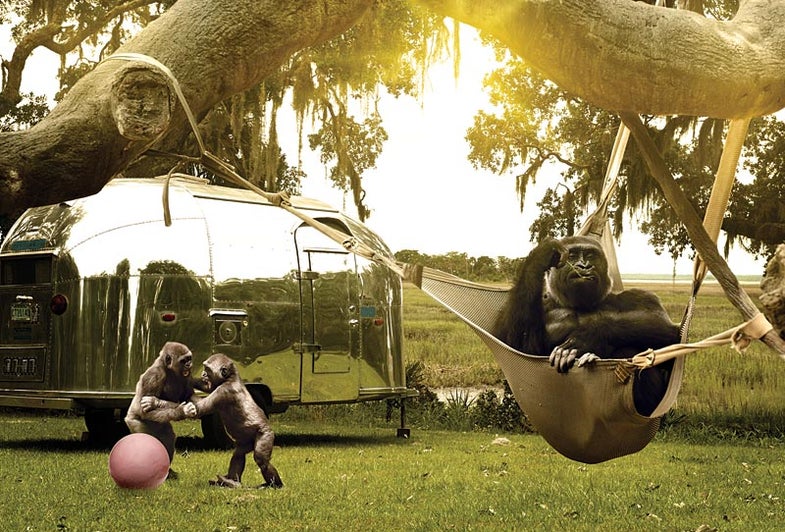 When James Quantz Jr.’s rep asked four of her photographers to each shoot a series featuring a vintage Airstream trailer, it was strictly promotional. “She wanted to show we interpreted concepts,” he says, adding that he has never taken a trip in an RV. “I imagined the things you might do with an Airstream, like camp or go fishing. And then I thought, wouldn’t it be fun to see gorillas doing them?”

The result, “Airstreamin’ Apes,” is not just a showcase but a labor of love, comprising three series of photo shoots and even longer hours of assembly in Adobe Photoshop CS5—all on a two-month deadline.

Quantz started by offering a local Airstream dealer to trade promo shots for a day with a vintage model. Next, he went to the Zoo Atlanta, and spent two days on the observation platform of one of the gorilla environments with his Nikon D700 and 70–200mm f/2.8 Nikkor lens, a notepad, and pen.

“I already had the location shots, and as I watched the gorillas I began to think of scenarios to place them,” he says. As the animals sat digesting their midday fruit lunch, “they looked so much as if they were concentrating, I was imagining a chessboard between them.” He noted one particular gorilla’s stare, which seemed lovelorn: “It was really just staring off into space, but I kept imagining it holding flowers.”

Back in the studio, he shot props to add to the images: coolers of beer bottles, flower bouquets, a chessboard and a fishing line.

Next came the composites. “CS5 has some tools that were a big help, such as Puppet Warp to change the positioning of a head or limb, and Content Aware Fill to eliminate debris such as leaves or twigs in landscapes,” he says.

Still, he’d spend 10–12 hours a day on a single image, and come back to it the next day to find things he’d missed. “I wanted to go the extra mile, make it perfect,” he says. “It was fun to capture the apes, and know that I could place them together just as I’d visualized them.”

James Quantz Jr., 39, is a commercial photographer based in West Columbia, SC. You can see a video showing his Photoshop process at quantzphoto.com/blog/archives/268****.

Features
animals
How to
My Project
nature
Shooting