How To: Shooting the Great Butterfly Migration

Making the most of a couple million monarchs. 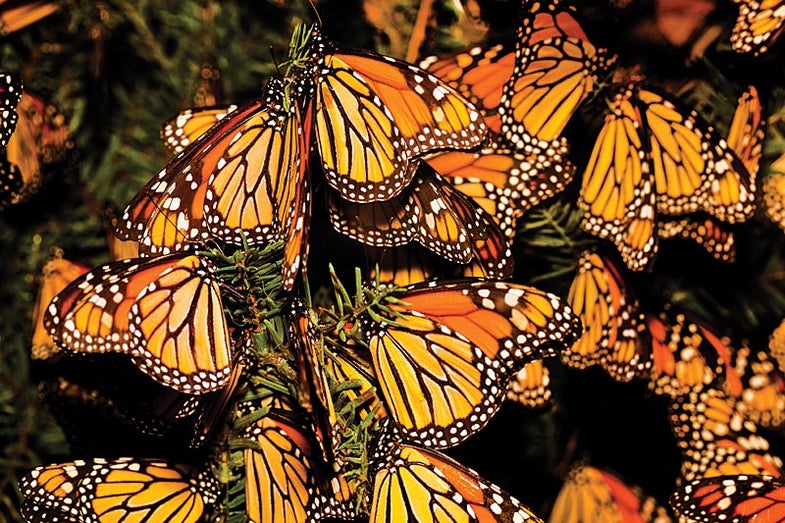 Each Fall, millions of North American monarch butterflies join in one of the most ambitious migrations in nature, flying from summer habitats to winter homes thousands of miles to the south. Those east of the Mississippi winter in Mexican highlands, while those west of it gather in either Mexico or along the central and southern coasts of California.

Migrating monarchs spend much of their time feeding in fields, gardens, and marshes. They will linger for hours, sometimes days. This is the perfect time to shoot close up.

Rather than chasing random flight patterns, stake out a nice blossom in good light, then let them come to you. Milkweed is their food of choice, but they like many flowers—goldenrod, zinnia and tithonia are other faves.

Shoot early in the day, when dew on butterflies’ wings slows flight, or use late low-angle sun to capture translucent colors.

Monarchs are skittish, so remain still and keep a distance of a foot or more. A macro lens with focal length of 105mm (equivalent) or longer will provide an unobtrusive shooting distance. For impact, fill the frame and use a wide aperture (f/5.6 or larger) to defocus the background.

Vary your angles. From the side you’ll get a profile when wings are up, but if you shoot from above you can get both wings down flat, warming in sunlight. Timing is more important than shutter speed—time shots between wing beats to avoid blurred motion and awkward wing positions.

Not enough images? In spring the monarchs reverse their migratory route and head north once again.