Creative Thinking: One in a Million

Jennifer Wu isolates a lily in the field. 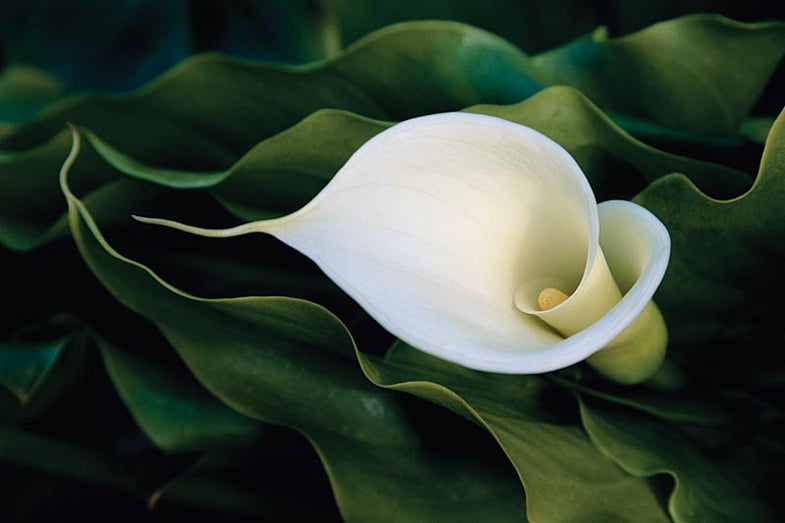 From the galactic night skies to earthly flowers, nature photographer Jennifer Wu (www.jenniferwuphotography.com) seeks out and captures atmospheric qualities of light. Her trick, she says, is in knowing how to modify that light to best suit her subjects.

Wu created this floral close-up one sunny morning in March 2002 at Garrapata State Park just south of Carmel, CA. A park ranger had directed her to a patch of calla lilies near the ocean when asked about scenes to photograph. By the time she found it, the sun was high, and she had to work fast.

The field of flowers was so large that she first began photographing the entire scene as a landscape, with the ocean as the background. Then she sought a single, perfect flower.

Among the lilies, her trained eye quickly located this needle in the haystack. “I look for graphic design elements like triangles, squares, shapes, or curves, and I pay attention to form more than what the subject is or its color,” she says. “I saw the leaves gently framing the calla lily, so I composed the shot with only those next to the flower.”

With her Canon EOS A2 loaded with Fujifilm Velvia 50 slide film and fitted with a 24–70mm f/2.8L Canon EF lens, she set her tripod at waist level, then ran through her lighting options.

The direct sun meant a straight shot would result in harsh highlights and inky black shadows. Using a flash, even with the power set at –1.3 or –1.7, would fill in the shadows but might reveal distracting detail in the leaves. In outdoor photography, flash is better suited to larger scenes, where it can help throw light on a foreground subject to balance a brightly sunlit background. Given the delicate nature of the subject, Wu decided that the best option was to soften the scene using a diffusion panel to bathe the flower in a luminous, warm, softbox-like glow.

Positioning her diffusion disc (a 52-inch Photoflex MultiDisc 5-in-1 Circular Reflector) over her head and between the sun and the flower, she tilted the disc to find a brightness that balanced the highlights of the flower with the leaves around it.

Even without the instant feedback of a DSLR’s LCD monitor, Wu knew she had a keeper. She shot just two frames and called it a wrap.