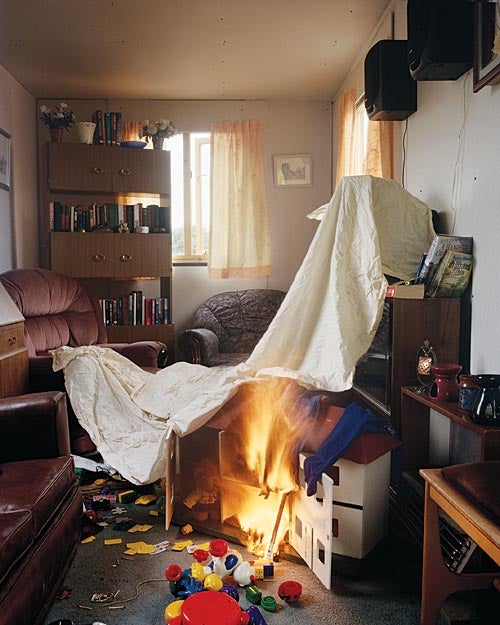 I first began work on my “Explosion” series in 2004. I’ve always been interested in the relationship between the real and the imagined, and I’ve noticed how eyewitnesses to extreme events with fires and explosions refer to them as “filmic” or “like a movie,” because they’re used to seeing these events so often in action films.

Through an earlier series, I’d made a police contact who knew that I was interested in pyrotechnics and simulated environments, and who referred me to the Fire Services College in Gloucestershire, England. Its p.r. manager was willing to make me an artist-in-residence.

I had access to many facilities, but what interested me most was the Burn Unit. For forensic training exercises, shipping containers are set-dressed as domestic interiors or offices, and then burned down to ash. Trainees have to rake through the ashes and work out the cause of the fire, with the help of other evidence given by training officers.

For the set pictured here, “House Fire,” the scenario the officers had come up with was that children were home alone, playing with matches, and trying to get fire to come out of a toy dragon’s mouth.

For the burn exercises I could attend, I had only about 5 minutes to set up my camera and 5 minutes to take photographs, and I had to be very patient and adaptive. I couldn’t move props around or direct the action, and often I had unworkable compositions.

“House Fire” was one of the more successful situations because I had space to work with framing and composing. I was standing just inside of the shipping container, with my Mamiya RZ loaded with Kodak Portra 400NC, a portable flash on a stand, and a small softbox for fill flash, speedily shooting until the smoke levels grew too high. This was the last shot I took before I made a quick exit with my equipment.

This series was later included in my book, Explosions, Fires, and Public Order (Aperture, 2010), along with other photos I’ve taken of related simulated crisis environments. In terms of genre, the photos are documentary, but they’re documenting a representation of another reality, which makes it more interesting. You feel like you’re witnessing something dramatic, but what you’re seeing is very controlled.

Sarah Pickering is an exhibiting photographer based in London, England. See more of her work at www.sarahpickering.co.uk.