Learn how to find your inner-photographic-Zen. 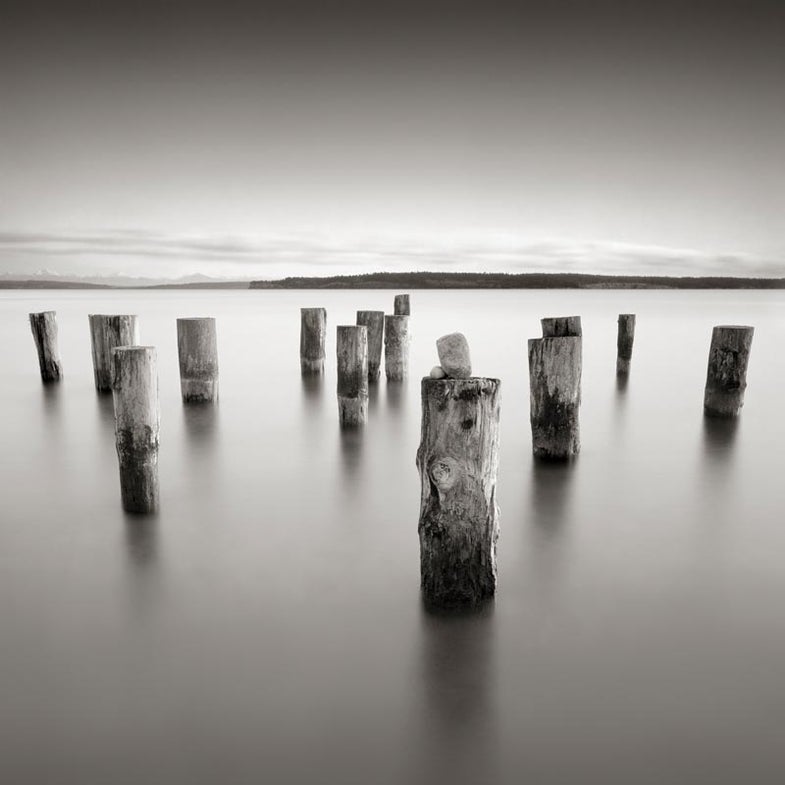 The main advice photographer David Fokos offers: “Focus.” (Aptly enough, he pronounces his name the same way.) Concentrate, he says, on the essence of the image, reducing or eliminating everything else. The San Diego- based artist has been exhibited around the world, and his style is likened to visual haiku.

A student of Japanese art history, Fokos has refined his photographic minimalism over 15 years, striving to create images that express a profoundly telling sense of place.

“What I learned was that to make an image of a place that I experienced over time, I need the camera to experience the place over time, as well,” he says.

He does this with an 81-year old 8×10-inch Korona view camera fitted with his sole lens—a 210mm Rodenstock Sironar-S (equivalent to a full-frame 29mm wide-angle lens). He captures images on Kodak Tri-X sheet film (ISO 320) and develops his negatives in Kodak HC-110.

He shot “Balanced Stones” in Port Townsend, WA, in 2002. He was driving along when the stones atop the post caught his eye. To emphasize them, he got as close as he could, giving the arrangement of posts some breathing room within his frame.

Fokos pays particular attention to how the visual elements in his picture interact within the frame, eliminating distractions. With this photo, “I made a conscious decision to shoot a bit downward onto the posts so that none of them broke the line of the horizon,” he says.

The camera position above the scene combined with a slight back tilt added depth and a slight angle to the posts. (This tilt is a movement view cameras can do thanks to bellows between imaging plane and lens.)

He found a big distraction, however, in the “visual noise” of the water’s surface. He wanted his picture to capture the essence of the serenity of the scene, not the water’s choppy texture. To blur its distracting surface movement, Fokos needed an exposure of about 2 minutes. To achieve it, he used a 3-stop neutral density filter, which cut light transmission enough to allow such a long exposure time.

If you want to adapt this kind of minimal, disciplined approach to landscapes, restrict yourself to simple tools (e.g., one wide-angle prime lens and a good tripod) and convert your images to monochrome.

Black And White
Composition
Creative Thinking
How to
Shooting