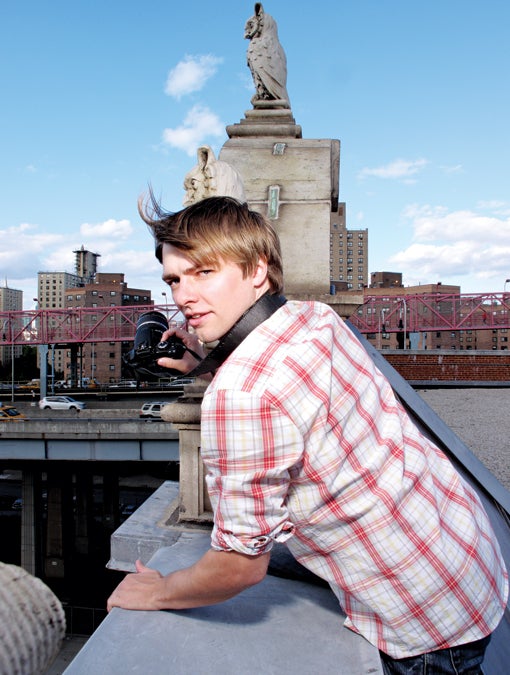 Freelancer Nick Carr, 27, scours New York City for locations for movie producers, then works on-site throughout the shoot. Among the films he’s worked on: Munich, Spider-Man 3, The Taking of Pelham 1 2 3, and The Sorcerer’s Apprentice (due out in July 2010). Check out his photo blog, www.scoutingny.com.

Day one, you get the script and read it. Then you make a list of locations you have to find—some are obvious, like Central Park or Grand Central Terminal, and it’s just a matter of logistics and permission. Some, like “college student’s apartment” or “dank alleyway,” are more abstract. Screenwriters and directors often have a vision of New York City that doesn’t exist, so you have to offer a lot of options. I have to draw on experience, knock on every door on the block, leave flyers, and hope people call me back. getting started: I went to Columbia University for film studies—I learned a lot about appreciating films, but not as much about making films. Then I worked as a production assistant for a year and a half, and a big part of the job was finding things the stars wanted—such as a basketball court at every location for Adam Sandler. Learning how to do this is how I later switched to location scouting.

I learned it on the job. I’ve upgraded to a Canon EOS Rebel XT with a 17–85mm f/4–5.6 Canon EF-S IS lens, but most location scouts use point-and-shoots. You don’t have to be a great photographer, but it helps if you put a little more work into it. Directors need to get a good sense of a place.

Going Above And Beyond:

I shoot a lot of panoramas— rooftops, rooms from different angles and corners—and stitch them together in Canon’s Photo-Stitch. Then I try to think like a director and take singles that could be actual movie shots.

I try for consistent lighting and a steady hand, since I don’t use a tripod. Low light is a problem, but sometimes directors want dark pictures—I shot Bryant Park at night recently, and they wanted it as dark as possible so they would know how to light it.

I work 11- to 12-hour days before the movie starts shooting, and 15- to 16-hour days when it does. There’s no cutting corners. Even if I’ve scouted and photographed a location several times in the past, I have to do it again to get the most up-to-date shots. And sometimes I never find what they need, and they have to build the set on a sound stage.