A DSLR makes a great addition to, not replacement for, your camcorder. 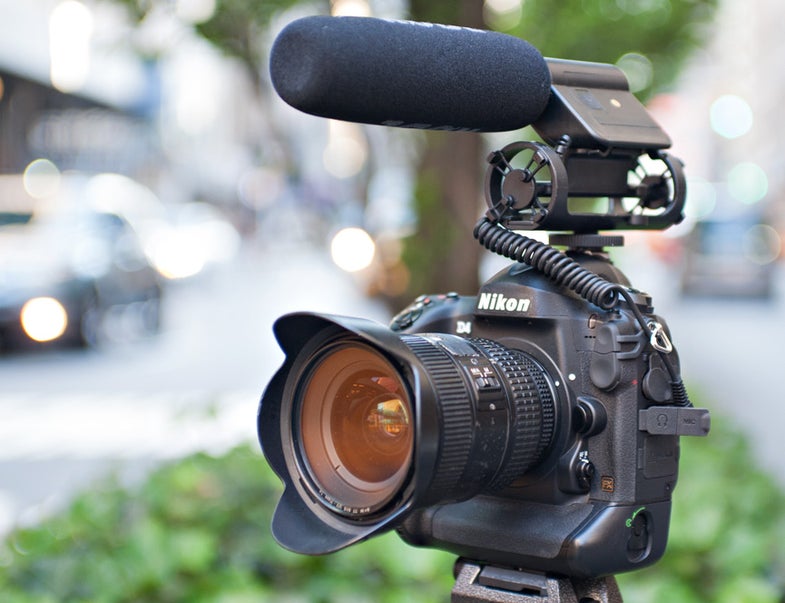 Despite the beauty of its image capture, a DSLR makes a great addition to, not replacement for, your camcorder. Here’s how to get the best video with the technology we have now.

Some of photographer Chase Jarvis’ favorite videos with the Nikon D90 were shot in ways he’d never try with a high-end HD video camera. Namely, rolling on his skateboard or clamped to the outside of his car.

2. Work Within Its Limitations:

If you’re shooting fastmoving action, you may want to stick with the camcorder for now. Rapid panning or following the motion of, say, a speed cyclist will cause what’s known as the “rolling shutter effect.” We’ll spare you a long technical explanation, but what you get is a picture that wiggles like Jell-o.

The great light sensitivity of a DSLR’s sensor is perfect when conditions are dim, but even at the lowest ISO, bright sunlight may force you into using the smallest aperture, killing your dream of film-like shallow depth of field. Control it with an arsenal of overall ND filters.

One of the special things about DSLR video is that you can shoot with any lens you can get your hands on. What could be cooler than HD fisheye or HD tiltshift? And if you have image-stabilized lenses, try those first. They’ll help out when you’re trying to pan. But make sure the lens is set to single-axis stabilization, which steadies only up-and-down shake.

If you can, plan your shot. Mark the floor where your actors should pause, and use tape to mark corresponding spots on the lens ahead of time so you don’t have to figure out where to focus when you’re in the middle of a shot.

Can’t deal with the headache of the audio? Forget about it! DSLR video is excellent with a musical soundtrack, and music makes a fantastic complement to your photos in a multimedia HD slide show.

7. If You Hate Manual Focus, Hold Out A Little Longer:

We’ve only had limited time with a preproduction unit, but the Panasonic Lumix DHC-GH1, a Micro Four Thirds camera with an electronic viewfinder, will be the first interchangeablelens still camera to shoot HD video with continuous autofocus. You can autofocus at any given moment by choosing a focus point and pressing the asterisk button on the the Canon EOS Rebel T1i or the AF button on Pentax’s new K-7.

Believe it or not, DSLR video does not require the fastest card on the block, but that doesn’t mean the drugstore special will work either. If you’re shooting SDHC, go for at least a Class 4 or, better, a Class 6. In a CF card, get any UDMA card.

Movie cameras shoot at 24 frames of film per second, but your TV’s frame rate is the slightly smoother-looking 30 fps. That’s why, generally speaking, most digital video cameras shoot at 30 fps, too. Some DSLRs let you choose, and occasionally the tradeoff for more frames per second is lower resolution. Our advice? Shoot at 30 fps when you can, even if there’s a resolution compromise. If 24 fps is your only option, that’s fine, too.

More than likely, your software will automatically convert it to 30 fps on output. There might be a slight image-quality degradation, but the average person won’t detect it.

When you’re working with longer clips and stringing together extended sequences, you’re going to need a fairly recent and powerful computer. Start by trying short clips on the best computer you have access to. If that can’t hack it, you’ll know it’s time for an upgrade. On a PC, get a 2.66 GHz or faster processor, a DirectX 9- or 10-compatible graphics card with at least 256MB, and a minimum of 2GB of RAM. Most of the new Macs will edit video, but be sure to get at least 2GB of RAM to make it work well, and buy an Intel-based machine to work with high-def.

If you’re a PC-user and you just want to dip your toe into short videos, use the software that came with your camera to process them. (The Canon, Panasonic, and Pentax models all come with software that lets you view videos but not edit them. The Nikon doesn’t come with video software, but you can play your videos in Windows Media Player.) To edit, try software such as Pinnacle’s Studio Plus ($100, download; www.pinnaclesys.com), Corel’s Video Studio Pro X2 ($80, download; www.corel.com), or Adobe’s Premiere Elements ($100, download; www.adobe.com). Mac users will need an Intel-based machine to edit HD video using Apple’s software-get started with the iMovie software that comes installed on your computer. Apple’s Final Cut Express is a great program for more sophisticated projects ($200, direct; www.apple.com).

As we said in the main story, sound is not one of DSLR video’s strong suits. Nikon’s cameras and Canon’s EOS Rebel T1i lack audio inputs, so if you want stereo you’ll need to record it separately. The Canon EOS 5D Mark II does have a mini stereo input, and you can use it with a hot-shoe mic or any other mic you can find with a mini jack. Pentax’s new K-7 will also have a mini stereo input, and so does Panasonic’s GH1.