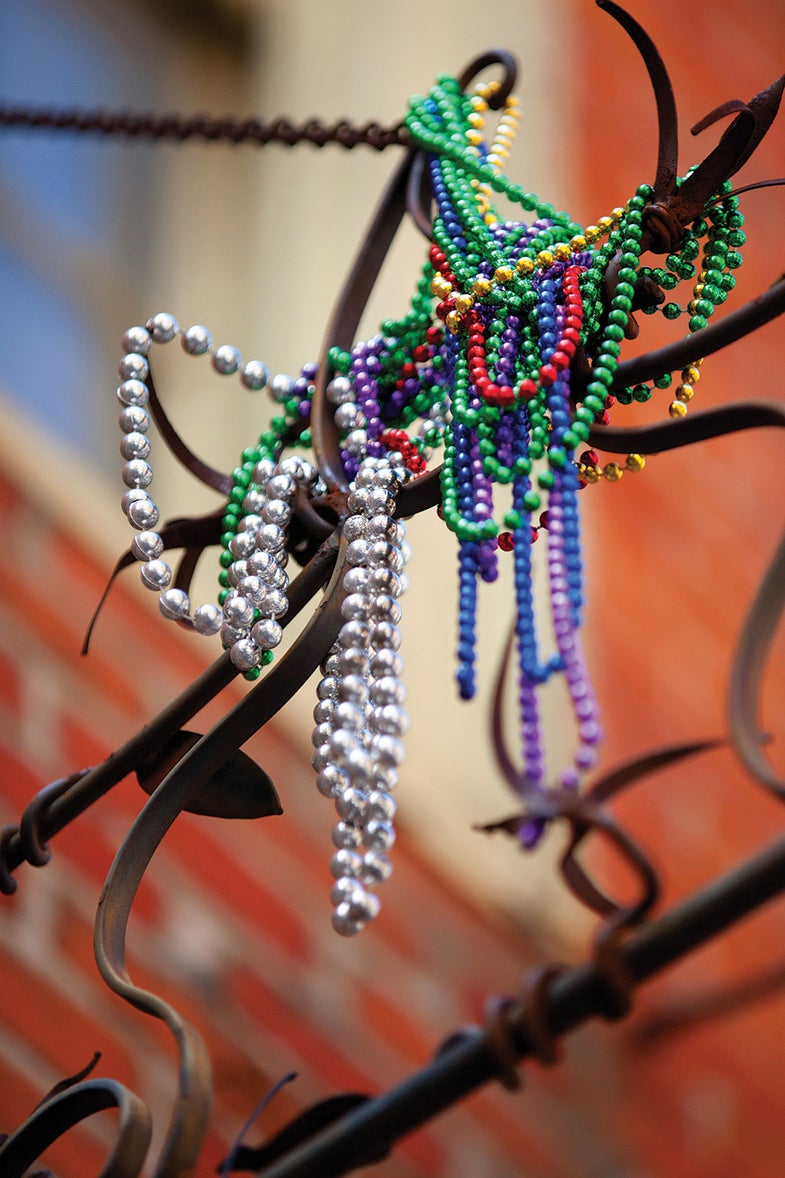 As photographer Kathleen Parker says of her hometown, “New Orleans is a mixture of mystery, history, love, despair, decay, activity, and beauty. In this unique and compact city you can photograph them all.”

Nearly a decade after Hurricane Katrina, the French Quarter’s Jackson Square remains one of the city’s most colorful, vibrant, and crowded gathering spots—a great place for people shots. The square is jammed with an eclectic mix of artists, from magicians and musicians to self-proclaimed mystics. “If you photograph a performer or entertainer there, you’re expected to tip,” Parker says.

The square’s late-18th-century Spanish architecture is another visual draw. The Cabildo and Presbytere (both museums now) and the St. Louis Cathedral fill one side of the square. “The ornamental sculpture on the Cabildo is particularly interesting,” says Parker. She also recommends the Pontalba Apartments on the square: “The red brick buildings are decorated with the original lacy ironwork balconies and were built about 150 years ago.” City Park, a 1,300-acre oasis in the heart of New Orleans with centuries-old live oaks, is another one of Parker’s favorite spots. “Moss grows wildly on the ancient trees that are wider than a bus,” she says. Best time to shoot: early morning or late afternoon, when the light slants in from behind. For an unusual perspective, take a gondola ride on the park lagoon.

Along the riverfront, travel pro Robert Wojtowicz, who shot the image shown here, strolls the Moon Walk promenade. “Head to the Steamboat Natchez docks and to Woldenberg Park for shots of the steamboat, river, and the bridge over the Mississippi in the distance,” he says. “Go in early morning for the steamboat in fog.”

To catch streetcars in action, he explores the area near the corner of St. Charles and Canal streets. “The best time is early in the morning, when the streetcars still have all their inside lights on and the street lamps are on but there is enough natural light already for the background,” he says.

Bigger Easy More places and events in and around New Orleans, in order of distance:

•The Krewe de Jeanne d’Arc Parade French Quarter This annual parade on January 6, dedicated to the city’s French heritage, commemorates the birthday of Saint Joan of Arc. Its organizers describe it as “a poetic and theatrical experience for participants and viewers.” The 2015 event starts on Decatur and proceeds along Chartres in the French Quarter; from 6 to 7:30 p.m. Bring a flash.

•Ninth Ward Rebirth Bike Tours The Lower Ninth Ward, one of the hardest-hit areas during Hurricane Katrina, is now making a remarkable physical and cultural comeback. Four-hour tours (often lasting longer) on cruiser-style bikes leave daily at 9:30 a.m. Along the way, stop at the former home of lifelong resident Fats Domino. $60 per person; buy your own lunch along the route.

•Bayou Sauvage National Wildlife Refuge Accessed from I-10, U.S. 90, and U.S. 11 Just 15 minutes from the French Quarter, this 24,000-acre marshland is the largest urban wildlife refuge in the country. It’s home to more than 25,000 migrating birds in the winter (340 species year-round), as well as white-tailed deer, otter, feral hog, nutria, mink, alligators, and turtles. The Ridge Trail (Route 90) has a 2/3-mile boardwalk and info kiosk.