While teles compress space and wide-angles expand it, the 50mm renders spatial arrangements almost exactly as your eye sees them. Try this: Mount a 50mm on your DSLR and look through the viewfinder. Now, slowly lower the camera. Photographers weaned on superzooms that yoyo between expanded and contracted space may be surprised — there’s little difference between views. This distortion-free magnification, perspective, and angle of view is why it’s called “normal.”

See our specs on the top 50mm brands.

For much of the film era, 35mm portraitists opted for focal lengths between 70mm and 135mm. Why? Because they flatter the human face — they’re neither long enough to compress space, which flattens contours, nor wide enough to expand a large nose. This pushed the 50mm lens out of the portrait business.

But then came digital. Because of the lens-conversion factor associated with most DSLRs, the too-wide-for-faces 50mm converts up to 75-80mm — perfect for half-length or even head-and-shoulder portraits. (Don’t get any closer, though.)

The 50mm f/1.4 also beats “portrait” (105mm f/2.8 or 135mm f/2.8) lenses, allowing convenient working distances and beautifully out-of-focus backgrounds. For a half-length portrait made with a 135mm, for instance, you typically must put 12 feet or more between camera and subject. That kind of space can be hard to come by or work with — you may have to shout to be heard. With a 50mm, though, you can step forward to fix Junior’s tie, then take a few steps back to click the shutter.

And if you want the kind of dreamy background Michael Soo produced for this intimate view of a model named Tiffany, nothing’s better than the f/1.4’s extremely shallow depth of field.

With its bright apertures of f/1.4, f/2, and f/2.8 funneling generous amounts of light through to the image sensor, the 50mm f/1.4 affords shutter speeds fast enough to freeze most common forms of human motion.

It’s especially well-suited to indoor amateur sports where organizers let you get within feet of the athletes. This lens, coupled with a high ISO, will work for basketball, wrestling, gymnastics, cheerleading competitions, or kickboxing in the dimmest gymnasium — all without flash.

Because most of today’s 50mm f/1.4 lenses have their origins in the film era, autofocus is rarely fast. This shouldn’t deter you, though. Many indoor sports move within the plane of focus, rather than moving toward or away from your camera. Wrestlers and fencers are easy to follow, and for hoops, just focus near the backboard or foul line, and wait for the action to come to you.

Plus, because 50mm lenses are so compact, with focusing rings right under your fingers, they’re easier to focus manually than almost any zoom lens — and in really low light, manual is preferable to auto.

Dreamily defocused backgrounds suggest mystery and romance — and few tools conjure them up as effectively as the shallow depths of field possible at f/1.4. No wonder you can’t dig too deeply in any wedding photographer’s bag before bumping into a 50mm f/1.4 “detailer.”

It’s useful for focusing in on table decorations, the bride’s gown and jewelry, the bridal bouquet, and other details, since that f/1.4 aperture successfully throws everything but your subject out of focus. It strongly forces viewers’ attention to where you want it, simultaneously casting an irresistible, soft spell over everything else.

Shooting at f/1.4 can be magical, but it’s not easy. Holding the focus on elements that need to be sharp can be challenging. (The closer the focusing distance, the shallower your depth of field becomes and the harder this gets.) So, when working at or near maximum aperture, be careful where you’re focusing. Don’t pay too much attention to the green “in-focus” viewfinder bullet. Instead, keep your eye peeled to the specific AF target that’s active.

Don’t automatically work at f/1.4. Closing down a stop lessens vignetting and expands the depth of field for sharpness, while still delivering softness beyond. And, since 50mm f/1.4 lenses are typically least sharp when used wide open, if detail is important (as in flower close-ups or eyelashes in tight portraits), again, stop down a bit.

While nowhere on the barrel of your 50mm f/1.4 will you find the word “macro,” if your lens has an aperture ring, you can quickly and easily turn your “normal” lens into an extremely powerful close-up tool.

To magnify your subject to a 1:1, 2:1 or even 3:1 ratio, all you need is a lens-reversing ring such as the Nikon BR-2A ($30, street). You twist the ring onto the front-barrel filter threads of your 50mm, and then bayonet the lens backwards into your camera’s lensmount. You won’t be able to focus at infinity — but bring on the bugs and buds.

If none of the 50mm lenses made for your camera have an aperture ring, macro fans still has options. Find a reversing ring for your lensmount (typically $15, street). With the right ring, you can reverse-mount any maker’s 50mm f/1.4 on your DSLR body and fire away in your camera’s manual mode. Search garage sales and online auctions for inexpensive 50mm lenses (with aperture rings). Or, failing that, grab a new Pentax 50mm f/1.4 for $200, street. Even new, it’s much less expensive than virtually any 1:1 macro lens around.

If you decide to try this low-cost and effective route to high-magnification close-ups, budget, too, for a macro focusing rail (from $175, street). Without one, you will very quickly tire of the tedium and inaccuracy of conventional manual focus at such tight subject distances.

If you’re accustomed to shooting in low light with a variable-aperture f/3.5-5.6 kit zoom, get ready for a pleasant surprise: Today’s 50mm f/1.4 lenses make sharp photography possible in the kind of light so dim, you probably would have left your camera in its bag before.

Several factors contribute to give the 50mm its superb low-light performance. First and most obviously, the high-speed f/1.4 maximum aperture allows more light through to the image sensor than almost any other lens available today.

Second, the compact dimensions of the 50mm lens are — compared with more long-barrelled lenses — less apt to magnify camera shake.

Third, if your camera body is blessed with sensor-based shake control (that’s you, Pentax, Samsung, and Sony owners), it will give you yet another stop or two of sharpness when lights are low.

Finally, with each generation, the sensors in today’s DSLRs are getting much better at suppressing image-softening noise in dimly lit shadows, even when you’ve dialed in high ISOs.

Add these factors together, and you see how a 50mm f/1.4 lets you leave tripod and flash at home. 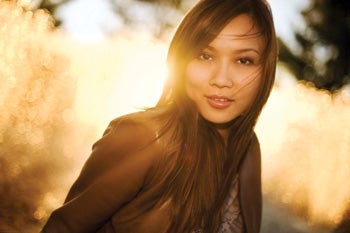 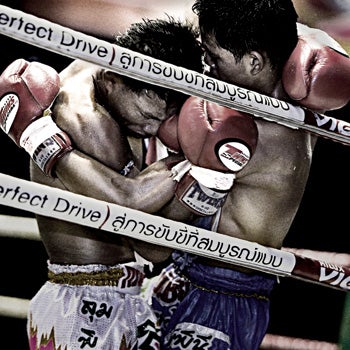 Lens Reviews
How to