You Can Do It

Use 21st-century magic to bring back the old-time look of America's pastime. 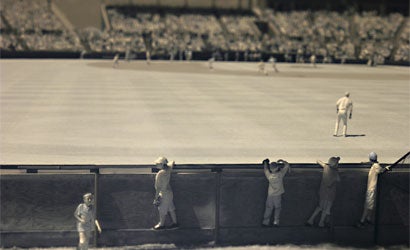 As a pro sports shooter, I’ve attended Major League Baseball’s annual Florida spring training seasons and have always been charmed by their old-time feel: smaller stadiums, closer fans, and better access to the players. To make images that recalled that earlier era, I decided to:

• Desaturate hues to suggest the days before color photography.
• Adjust depth of field to give the appearance of images made by a swing-and-tilt view camera and antique, super-fast, super-soft lens.
• Find subjects (and crops) that eliminate contemporary references.

Finding nostalgic subjects is easy; finding them without advertising, trendy T-shirts, or cell phones is hard! (I made these photos across several afternoons in and around the Space Coast and Dodgertown stadiums in Viera and Vero Beach, FL, respectively.)

Using black-and-white film or image-editing software will let you desaturate color, but I chose digital infrared. In addition to its flatter color palette, it provides an overall softness and low contrast like that of lenses a century ago.

The pictures were made with a Canon EOS 10D body, whose infrared-blocking filter I had removed from in front of the sensor. Life Pixel (www.lifepixel. com) in Mukilteo, WA, did the job for $350. The converted camera is easy to use (no red filter or long shutter speeds required), and the conversion actually increased the body’s resale value — a great second life for an older DSLR.

Because no preset color balance works for IR, you must set a custom white balance. Filling the frame with green grass in direct sunlight as a CWB target image works best, compensating for the red shift that’s common with digital infrared.

To get the defocused fore- and background, I used Canon’s 45mm and 90mm f/2.8 TS-E tilt/shift lenses, which produce a shallow depth of field by repositioning the plane of focus. The effect recalls old-fashioned view camera pictures, with the added benefit of drawing attention to my subjects, the players and fans.

I determined the (usual) exposure of 1/500 sec at f/4 and ISO 100 with a handheld Sekonic L-508 lightmeter. Handheld metering works best because the tilt/shift movements alter meter transmission, causing built-in meters to overexpose with a downward tilt, and to underexpose for all other movements.

Tilt/shift lenses are expensive — my 45mm streets for $1,100. But many photo specialty stores rent them by the day. You also can make this kind of image without a tilt/shift lens by using graduated Gaussian blurs in Adobe Photoshop.

My biggest creative challenge, though, came before I started to shoot: deciding on the photographic technique that would help tell the story that I wanted to tell.

Peter Lockley is a sports photographer for the Washington Times. See more of his work at www.sportsshooter.com/peterlockley.