Women On the Frontlines 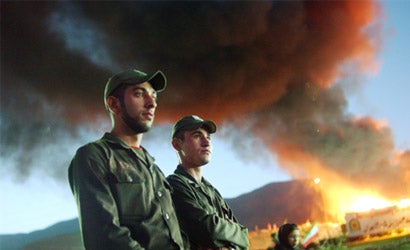 A year ago when the founders of Fovea Exhibitions Inc. wrote their initial grant proposal, they conceived of an exhibition highlighting 12 women photojournalists. They created a short list of photographers to include, and VII photographer Alexandra Boulat was at the top.

Opening Saturday with a daylong event, Dispatches from the Frontlines: 12 Women Photojournalists represents the gallery’s seventh exhibition — and has become sadly pertinent since Boulat’s death in October following a brain aneurysm. Her work will be presented at the Beacon, New York, gallery in a retrospective slideshow created for Visa pour l’Image.

“Every one of the photographers and people working on this show, I know we’ve all been so influenced by [Boulat’s] spirit, her substance, and her style; it makes perfect sense to encapsulate the other efforts as a tribute for her,” says Fovea co-director Stephanie Heimann.

As the Dispatches exhibition took shape, Heimann, a photo editor who has worked for Newsweek and New York Magazine, and her fellow director Sabine Meyer, photo editor for National Geographic Adventure, decided to focus on coverage topics. In addition to the images by Boulat, each of the 12 photographers is represented by her work in an area of current importance, ranging from the presidential campaign by Samantha Appleton, to Iran by Lynsey Addario and Texas poverty by Pulitzer Prize finalist Mona Reeder.

“The idea is to challenge the idea of the frontline as something that’s not just happening far away, but something that affects you in your home environment,” explains Heimann.

Although the exhibition strives to showcase and support women photojournalists, Heimann and Meyers wanted to avoid restricting the show to “women’s issues.” Yet in some ways they were impossible to avoid.

“We didn’t want to make it ‘the women’s story,’ but it’s there,” Heimann says. Women photojournalists are covering every big story that men are covering, sometimes from a different angle — and often with more access. For instance, Anastasia Taylor-Lind decided to document the terrorist-dubbed Kurdistan Workers Party through its high rate of women members. And a man couldn’t have gained access to the isolated world of Afghani women as photographer Lana Slezic was able to.

Fovea Exhibitions is also working with after-school programs to provide media literacy classes based on the Dispatches exhibition. Fovea is a not-for-profit organization run on a volunteer basis by Heimann, Meyer, and other working photography professionals, and part of its mission statement is to provide educational programs for community schools. The gallery is currently working with six schools, often bringing students in to view exhibitions or sponsoring events with exhibiting photographers.

Heimann is particularly proud that Fovea’s educational programs have prompted positive action. After viewing Palani Mohan’s moving images of Asia’s endangered elephants, one student had the idea to adopt an elephant, and the students raised enough money to feed it for a year.

In its first year, Fovea has shown work by Ron Haviv, Lori Grinker, Chris Hondros, Todd Heisler, Suzanne Opton, Ziyah Gafic, Paolo Pellegrin, and Mohan. Fovea Exhibitions focuses on the work of photojournalists, one of the only (if not THE only) such gallery – especially in the small town of Beacon, outside New York City. But Heimann says the reception from the community has been incredibly positive and supportive — even if Fovea is known to some as “that kind of melancholy gallery.”