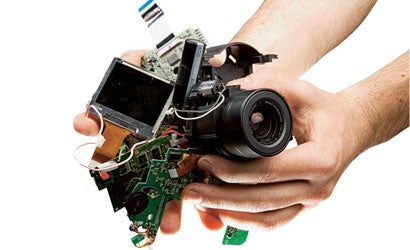 The plastic bins are piled high with cameras-hundreds of them. Point and shoots. SLRs. Digital. Film. A rubber band around each holds a neatly folded sheet of paper with the owner’s name and address, as well as the reason the camera is here: “Doesn’t focus.” “Won’t turn on.” “Everything is blurred.”

Welcome to Mack Camera & Video Service, the photographic equivalent of the Intensive Care Unit. In a squat yellow building on the main drag of Springfield, NJ, 17 technicians poke, probe, and power up each camera to cure what ails it. Each year, Mack sells more than 200,000 extended warranties, which kick in after the manufacturers’ expire. Though only a small percentage of the cameras break, those that do land in these plastic bins.

Mack’s President Melvin I. Kevoe and his team have seen it all. From the guy who mailed his camera in a bed of freshly popped popcorn, to those who can never get their cameras to work because they refuse to read the manual. But most of the problems fall into fairly clear-cut categories.

Here are the top ten things that put cameras in the Mack Infirmary:

1. Gravity
“People don’t want to say that the camera was dropped,” says Kevoe. “OK, then it was ‘impacted’-it hit something, or something hit it.”

2. Dunking
This one is an obvious camera-killer.

3. Corrosion
A damp windy day at the shore can wreak havoc with a camera’s electronics. Salt in the air may not work its evil magic right away, but when it does, things get ugly. “You look inside the camera, and it’s green,” says Service Manager Eric Menkin. “It doesn’t take much corrosion to short it out.”

4. Bent Pins
Those gold pins at the bottom of the camera’s memory card slot are as delicate as they appear. On some cameras, a couple of pins are higher than the others. So if you insert a memory card sideways, backwards, or any other way that pushes on these pins, they can bend and touch other pins. The result? A short circuit affecting one or more functions. For instance, you may be able to review photos, but not take them.

5. Bent Blades
With the DSLR turned on and the shutter set to Bulb, a do-it-yourselfer pokes a swab inside the camera to clean the image sensor. Suddenly, the shutter blades snap closed around the swab. Instinctively, the swab is jerked out. The blades assume an awkward new shape.

6. D-I-Y Sensor Cleaning
You don’t want to risk damaging this part of your camera. “The smartest way to clean the sensor is to not do it all,” says Kevoe. Leave it to a technician.

7. Wiggling Wires
Don’t muscle the USB cable if it doesn’t go in or out smoothly. The connector is only faintly soldered to the camera’s circuit board.

8. Thumb-Loading
While putting film into your 35mm SLR, you press it into place atop the shutter assembly, and…oops, something’s bent or broken.

10. Door Busters
“Damn that battery door,” you mutter, as you’re forcing it shut or prying it open. Snap! “Sometimes it’s not just the door,” says Menkin. “You can also break the camera body.”

“Ten to 15 percent of the cameras that come in here aren’t really broken,” says Mack Camera & Video Service’s Melvin I. Kevoe. That’s a big number, considering that each year about 14,000 cameras make their way to Mack’s repair facility.

Here are some common complaints that accompany “not really broken” cameras, along with simple fixes for them:

“There’s a soft spot on all of the pictures.” You have a thumb print on the lens. Clean it off.

“The camera is sluggish.” You loaded it with new batteries, but they were cheap, low-power cells.

“The pictures are pixelated.” Check the menus-the camera is probably on a low-resolution setting.

“The view through the viewfinder is blurry.” Try adjusting the diopter.

“Every single shot is either way underexposed or way overexposed.” Do you want to bet that you once put a two-stop over- or underexposure into Program mode, and now you’re activating it?

“It won’t take any pictures.” The memory card is full.