Using the grassroots marketing techniques of social networking and a casual approach to copyright, Aaron Johnson has turned a camera-toting duck into a cult-favorite comic character. 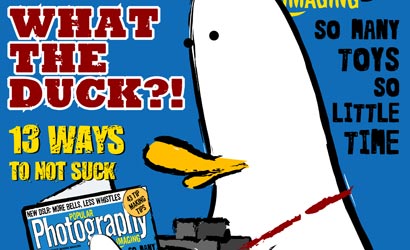 The story goes that Aaron Johnson of Oak Creek, Wisconsin woke up one morning last July and had the idea to make a comic strip about a struggling professional photographer who just happened to be a duck. These first five strips appeared on his band’s blog, as filler material while the band’s regular blogger, lead singer Carol Kroll, was away for a few days.

Within a few hours, photo-centric message boards such as sportsshooter.com and the PopPhoto.com forums were linking to the original five What the Duck comic strips.

It was meant to be a joke. A one-off. A way to add some fresh content to the band’s website during some downtime. That’s it. Five strips, then back to band updates.

Then the emails began — from photographers, both pros and amateurs, industry names and weekend hobbyists alike. Like wildfire, What the Duck burst onto the scene, with its own Web site, an ever-expanding line of WTD-branded merchandise, and a fanbase that continues to grow, both among photographers, the people who love (or put up with) photographers, and a growing readership that is now reaching beyond the niche photography market.

But what a niche it is! Market reports show 24 million digital cameras unit sales in the U.S. in 2005, and 26 million more in 2006. Who doesn’t know a photographer that bears resemblance if not physically, than in temperament and gear-obsession, to the Duck? And although some of the jokes are exceedingly insider-only, such as the ERR 99 message* in the Photographer’s House of Horrors (strip #74), much of the humor transcends the photographer lifestyle, and is universal to the current state of mind.

WTD has a minimalist style, with clean lines, crisp colors, and witty, wry dialogue. There’s very little learning curve needed to “get” a given strip, as there’s been virtually no character development or “back story” to catch up on.

You know this Duck. Kind of — you think you know this Duck. Sometimes it’s shocking to hear the things you’d like to say such as in strip #185 when the Duck responds to a lowballing client with a perceived analogy about beating the lowballer with a stick. A slapstick assault and the punch line, “what analogy?,” puts rather bluntly what many creatives have felt when working with impossible clients: creatives — even angry avian creatives — have bills and need to eat.

Without Johnson’s continually entertaining wry observations on the photo lifestyle boiled down to near-haiku proportions, What the Duck would never have taken off. But it has, in large part due to Johnson’s grassroots marketing “efforts.” Johnson is quite OK with readers linking in to strips, posting the strips on their own blogs, sharing them in photo forums, and letting Web 2.0 social networking spread the word of the twisted little waterfowl. Rather than hound, harass and police the fan base for posting a strip, he’s content to share his primary creation (the actual comic strips) with the Web world free of charge. Share the strip — spread the Duck’s message!

Don’t get it wrong — Johnson has bills to pay and a family to feed just like all creatives, but it’s the ancillary income of WTD that pads his regular paycheck from his day job as a computer-based animator for Milwaukee-based Mad Max Designs. The product line of WTD-branded merchandise is available from the DIY Web shop CaféPress, and rumors have it there are even more cool WTD products in the works. “Share the strips, but buy a T-shirt,” neatly summarizes the business model in the economy of words that characterize this medium.

The line between artist and audience gets fuzzier when you look a little deeper into the WTD site. Johnson never names a strip himself. Every weekday a new WTD is posted with just the serial number, and readers are invited to submit their suggestion for the title in the response field below the photo. A day or so later, the best of the submitted titles is attached to the strip, and the process starts all over again.

It’s not just the titling of the strips where the line between artist and audience blurs. The newest shirt design, of the Duck and a cohort, one with a supertelephoto lens, and one without, was voted upon by the readership. One of Johnson’s two original punch lines, “Size Matters,” now graces a T-shirt, as well as the reader-submitted caption “Kiss My Glass.”

Johnson has invited guest cartoonists to make their own variations of WTD in the past, and in celebration of today’s publication of WTD #200, the site is featuring several “Guest Writer” comics, again submitted by the fan base (which is nice for those of us with no illustrating talents!).

Without Johnson, there would be no What the Duck, but without the readership, there’d be no cult of What the Duck. It’s truly Johnson’s creation, but he shares so much of the process with the audience. It is not so much “transparency” in the modern business sense of the word that big-box companies use to describe their purported openness to their end users. It’s more like an improv comedy show, where the actors on stage take their cues from the audience.

In many ways, WTD represents the best of the Web 2.0 phenomenon, where everyone is an artist and online opinion-maker and it’s all so DIY and grassroots. There’s a talent creating an amazing product who doesn’t distance himself from his audience. Instead, Johnson embraces the interaction and exchange based upon his creations and there is a genuine sense of artist/audience interaction and interdependency.

Johnson’s interactivity with his audience in relation to the creative process isn’t limited to What the Duck. His band, Sweet Jelly, is redesigning their Web site, as well. Johnson describes the soon-to-be-relaunched Sweet Jelly site as a “participatory music blog, where listeners will get to be a part of the song writing process and get to hear our weekly recordings of new songs — progressing from rough ideas to finished ‘hits.'”

The breakdown of the artist/audience wall and the willingness of Johnson to freely share much of his content with bloggers, fansites, and photo forums may create a problem with bringing WTD into the realm of traditional newspaper syndication, due to usage rights concerns on the part of the syndicates. Johnson doesn’t appear willing to jump into the more traditional distribution channel if it means he’ll have to cede control of the usage rights — meaning that bloggers and forum users wouldn’t be free to share the strips and spread the Duck’s message without fear of the dreaded “cease and desist” e-mail from the syndicate’s copyright infringement team. (And be sure to check out the amusing Syndicate Bingo page to keep tabs on the quest for syndication — on Johnson’s terms, of course.)

The road to widespread success as a comic strip artist has traditionally been riddled with challenges, pitfalls, and the whims and caprices of the major syndicates’ editors. And even once a strip has been accepted for syndication, it is still up to the member newspapers to decide if they wish to publish a new strip. And in newsrooms across the country, the comics pages appear to systemically shrink with each passing year.

Perhaps eventually the real success of What the Duck and other up-and-coming comics won’t be measured in newsprint, but instead in the new media metrics of mouseclicks and merchandise sales, free from the constraints of the old guard big six comic syndicates.

* ERR 99 is a generic error code displayed by Canon EOS series DSLRs when there is an error that does not have its own specific error code. It’s amazingly frustrating when it happens, and it tends to happen at the worst possible times — usually once-in-a-lifetime photo moments.