What the Duck: Coming to a Paper Near You? 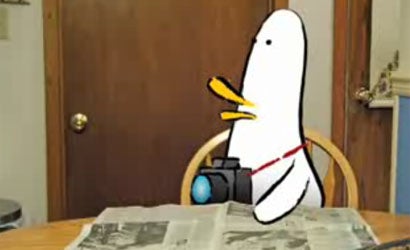 After starting out as an online strip, What the Duck is set to tackle newsprint as a syndicated strip for Universal Press Syndicate. Courtesy Aaron Johnson/what The Duck
SHARE

As Aaron Johnson’s online comic strip, What the Duck, passed the 200 strip mark in April 2007, we shared our thoughts on the humor and Johnson’s curiously brilliant “business strategy.” Now, just a little over two years after creating five strips on a whim after waking up with the idea of a photographer duck as the star of a comic strip, Johnson has passed the 500-strip mark and newspapers are picking up the comic strip for syndication. There’s a book deal in the works, too; Andrews McMeel is planning a Spring 2009 release of their first collection of What the Duck strips.

That’s right — the Duck has hit the big time.

Professional photographer and blog wizard David Hobby –the Strobist– calls Johnson “a web 2.0 genius.” In fact, the Strobist wore one of Johnson’s What the Duck T-shirt designs during a training video, and has been sent an “amazing number of emails” asking about purchasing the t-shirt since his DVDs have been in market.

There will be a small change when you read What the Duck in your local paper: it will simply be called WT Duck. Online, it remains What the Duck. But that’s the only concession, nothing else changes. (Well, OK, that’s kind of a lie. It’s now 7 days, with the Sunday strips being bigger and in color-but still in three-panel format.) Universal Press Syndicate (UPS) will provide a daily fix of the Duck on its site, alongside the other comic strips in their stable, and Johnson will continue with the WhattheDuck.net (and now .com, as well!) site unchanged. There’s no concessions, no trade-outs, no character changes. The strip and the experience continues as it is-and we are very happy about that. Bloggers can still link and post the strips or translate to their native tongue without fear of the UPS IP police, the CafePress shop will continue to launch new branded offerings, but now maybe you’ll also see the Duck elsewhere as well, as the UPS marketing team pushes to bring the Duck to an even bigger stage.

John Glynn, Vice President of Rights and Acquisitions for Universal Press Syndicate — home of The Far Side, Doonesbury, and Calvin and Hobbes — describes Aaron Johnson as the “first real 21st century cartoonist.”

According to Glynn, getting a comic syndicated is a long shot: in the neighborhood of 3,000 to 1 based on their yearly submission-to-syndication ratio. If these odds weren’t enough to begin with, the strip was originally rejected by a different division of Universal Press Syndicate and Johnson’s journey towards syndication may well have ended right there. But Glynn had caught wind of Johnson’s “Syndicate Bingo” and requested a resubmission upon seeing the initial UPS response on the game card on Johnson’s site. Which, of course, led to the offer for syndication.

It’s one thing for a funny web meme to circle the world in a weekend and give a chuckle to lots of viewers in a short time. It’s quite another thing to consistently provoke out-loud laughter. Pardon the terrible pun, but What the Duck burst onto the scene nearly fully hatched. When a handful of photographers offered their appreciation and support in those first days of the strip, it encouraged Johnson to keep the strip going for a while. The web would be a less funny place every day had the photography and cartoonist communities not instantly embraced Johnson as one of their own. But Johnson was embraced and encouraged to continue on his unlikely journey, precisely because his take on the photography world is so dead-on accurate in its own twisted way.

Johnson navigates the social web with the best of them — and not just with the call-and-response experiences on What the Duck such as the Go Duck Yourself! 500th strip tie-in (that’s my handiwork up there on the left, using the Liquify tool and Lighting effects in Adobe Photoshop to make an X-Files inspired entry). There’s a Facebook page, a YouTube channel for the animated comic strips Fridays, a Café Press storefront with an ever-expanding product line (thongs, polo shirts, baseball hats and more!) and readers’ translations of the strips into all sorts of different languages.

While much of the humor is specific to photographers on the surface, Glynn feels that the humor and delivery is universal enough to appeal even to readers who don’t consider themselves photographers at all. “Johnson knows how to write a gag-and he writes on a lot of different levels.” And to Glynn’s thinking the photography world is simply a backdrop for a brilliant cartoonist who has the potential to make a lot of readers laugh.

Being accepted by a syndicate is the first step. The next step is for newspaper comic page editors to decide to pick up the strip. And picking up WT Duck will almost always mean bumping a different strip-swapping strips isn’t a decision Features Editors take lightly, because every strip on the comic page has its own vocal fans who will send letters or cancel subscriptions if their favorite strip is bumped, according to Glynn.

We think What the Duck is funny. And maybe it’ll be in your paper next to Cryptoquote in gloriously smudgy newsprint in the near future. But if not, you can always find the smudge-proof color version online in Johnson’s little corner of the web.

Johnson’s day job is as a computer-based animator and illustrator and that’s not going to change any time soon. And his night job in his band, Sweet Jelly, remains the same. (The group has played only one show so far this year-but they are working on new material all the time.) These personal animation and musical skills allow him to throw the Duck into the ultra-hot web video space easily. Each Friday sees an animated strip, and there are occasional videos that don’t necessarily follow the three-panel format nor a regular cadence. Notable among these special videos is the recent “Kenosha Rocks” piece, which illustrate Johnson’s “different levels” and an amazing Groening-like ability to somehow waddle the line between being totally derivative and paying homage while still being completely original in its own way.

“Kenosha Rocks” is a shoutout to the residents of this city whose newspaper, the Kenosha News, was among the first to consider syndicating the strip. In the video, the Duck takes a road trip to the city to celebrate in front of the sights of the city montage-style. The fuel cost punchline completes the piece, and it stands completely on its own as an original in both the gag and the concept of the Duck celebrating the first newspapers to pick up the strip.

You don’t have to know that “Kenosha Rocks” is a parody of/take-off on/homage to “Cleveland Rocks”, the theme song of The Drew Carey Show, to appreciate Johnson’s piece. But if you catch it, it makes “Kenosha Rocks” even funnier. And hardcore photographers will get the total insider angle: Drew Carey isn’t just a comedian and game show host, he’s a serious sports photographer as well.
Many levels, indeed.