In the first three weeks since the announcement of the beta site on May 6, 2008, Toronto, Ontario-based Idée inc.... 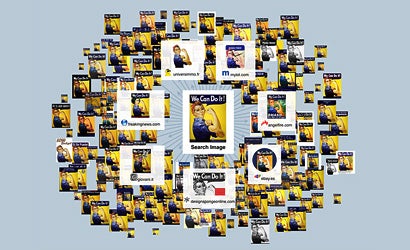 In the first three weeks since the announcement of the beta site on May 6, 2008, Toronto, Ontario-based Idée inc. has authorized over 12,000 beta testers for Tineye, with a waiting list that grows longer by the day according to CEO Leila Boujnane. You may not be familiar with Idée inc. by name alone, but you’ve probably heard of Idee’s technology before. They license their technology to Adobe for the “Find by visual similarity” sort-by functions in Photoshop Elements 6.0. Other clients of Idée technology include Digg, AFP, AP, and JupiterImages, just to name a few.

Idée’s goal with Tineye is quite simple: to be the image search engine. And although you’ll never hear anyone from any company (think Google and Photoshop) officially admit it due to trademark diminishment concerns, it’s a safe bet that Tineye is secretly hoping to be “verbed” in the image-search space: “Can you Tineye yesterday’s lead photo to see which blogs picked it up?” And there’s already a Firefox extension, making it easy as a right-click to launch a Tineye image search.

Tineye is a different sort of search engine. Instead of using captions, filenames, and surrounding text to search for images using words as the criteria, Tineye employs actual images as its search input criteria. Either upload a file to Tineye or point Tineye to the URL of the image online, and it instantly creates a digital “fingerpint” via a number of proprietary algorithms — and searches this on-the-fly fingerprint against its database of crawled and indexed image fingerprints. Their database of images is currently around 487,000,000 — still just a fraction of the tens of billions of online images and the four billion-plus images Boujnane estimates Google has indexed via syntax to date. Boujnane expects to pass the billion-image mark “very soon.”

Boujnane stresses that first and foremost, Tineye is a search engine. The purpose of Tineye is to facilitate image-based search — plain and simple. In other words, Tineye is not policing the web for copyright infringements: it is simply crawling the web for identical and very similar images. Tineye will point out the URL of identical and similar photographs, but the onus of copyright protection lies with the asset’s owner. To put it another way, Tineye is not Idée PixID system — which is a high-end intellectual property protection solution and service based on similar identification algorithms. If you discover unauthorized usages of images through a Tineye search, and are so inclined to pursue a course of legal action, it is up to you — Idée does not get involved.

Boujnane and Idée are on to something very smart with Tineye. By narrowing the scope of Tineye to be simply a search engine, the potential market share broadens expansively. Photographers who do not want to subscribe to the PixID system can manually patrol the web for their images. However, this is but one possible user behavior — not every replication of an image on the web will necessarily be followed by a course of legal action, whether or not it is authorized.

• Many photographers are willing to freely share their work under Creative Commons usages — and may be mostly interested in following the spread and distribution of an image simply out of curiosity.

• Bands, video games, and other branded entities often release buttons, bugs, and banners for fanboards. And if a couple of different design options are published at the same time, it can be used to track the popularity of different iterations of those bugs and buttons.

• The creators and distributors of press release photographs want their imagery spread far and wide, and this allows tracking.

• Many blogs excerpt a brief capsule of a piece, along with an image, and link back to the primary source for the full piece. Popular aggregator blogs can have a significant positive impact on a site’s overall traffic.

• Academic research on historical images that are in the public domain, such as Ansel Adam’s work for the Department of the Interior, and other iconic photographs and images.

• Academic research on historical images that are so iconic as to be part of the cultural consciousness, such as Thomas Franklin’s famous 9/11 photograph. Even if you are not the copyright holder with a vested financial interest in the protection of the image, the online placement of this photograph may still be of interest.

Let’s look at scenario #4 in the bullet list with one of the most popular archived stories I’ve written for PopPhoto.com: How to Create High Dynamic Range Images.

With the Firefox plugin, it’s a simple matter of Right-clicking on the image to launch a Tineye search which yields a couple of internal PopPhoto.com links, along with a version of the shot on the exceedingly popular blog Boing Boing. Boing Boing did not ask me or Pop Photo for permission; however, as it builds both my personal brand equity and Pop Photo’s brand equity because of the positive affiliation on a major blog site it would be foolish to jump up and down over this appropriation.

However, a search for Thomas Franklin’s iconic 9/11 image yields over 9 pages of results, and there are good odds that few of the results are actually licensed. The Bergen Record holds the copyright of this image, and license through only a handful of vendors. Even if you (like us) do not have a fiduciary interest in this image, it is fascinating to see where this unforgettable photograph pops up in various iterations and variations.

Will Tineye be the definitive image search engine? The service is expected to launch to the public in the fall, and if the ever-growing list of beta test applicants is any indication, Tineye may figure as a major player in the image-search arena.

Want to be a Tineye beta tester? Idée Inc. has 500 beta test registration keys for PopPhoto.com readers. Click here to give it a shot!