How to take a fresh approach to an everyday -- and ever popular -- subject. 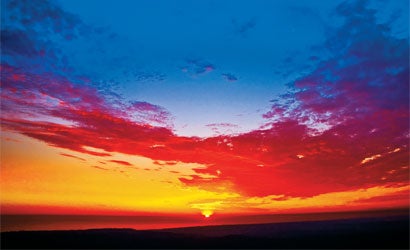 Face it: If you see it, you’ll shoot it. You just can’t resist that big ball of fire, that pink and purple sky, that shimmering reflection on the water, those silhouetted trees.

Sunset — the biggest photographic cliche there is.

But before you click the shutter, stop and think. Not just about the things you need for a good photo, such as a polarizing filter and tripod, but also about how to go beyond the picture you’ve already seen way too many times.

Here are four examples of how to do it with a difference.

Reach for the sky

Instead of balancing the earth and sky, play down what’s below the horizon to give the heavens your full attention.

That’s what Michael J. Slezak of San Diego, CA , did when he shot this boldly hued sunset. The sky, complete with textured clouds and a tiny jet trail, is the sole subject. He shot the photo in RAW and used software to make the colors look as intense as he remembered them — then gave them an extra boost.

Of course, it’s easy to make the ground seem insignificant when you’re hovering thousands of feet above it. Slezak, a commercial hot-air balloon pilot, took this photo on the job. “Balloons only fly at sunrise and sunset, when the air is calm,” he says. “In this picture, the colors may have come out so strongly because I was up above the haze layer.”

Who says that sunsets always have to be colorful? Black-and-white can be just as striking as pink-and-purple.

Ask photographer Tomas Kaspar, originally from the Czech Republic and now living in Seattle. He shot this stark landscape in Death Valley. Although he does have a color version, he planned from the outset to make a classic monochrome.

“Planned,” in fact, is the operative word. That and “patience.” Kaspar had shot a similar picture years before, but lost it in a hard-drive crash and wanted to remake his original. Then, in late 2004, he learned that heavy rains in Death Valley had created a shallow lake — essentially a giant, salty, mud puddle. Rather than rush to capture the sunset reflected in this strange body of water, he waited. And waited. And waited. A year later, the lake finally dried up, and Kaspar spent a week shooting the effect.

For this shot, he says, “I walked around from about four hours before sunset, looking at angles and compositions, until I saw this shrub. Then I knew I had it.” He only had to wait a little longer for the shadows to reach the length he wanted.

See more of his work at www.tomaskaspar.com.

Sometimes the sunset itself is the least interesting thing going on. When that’s the case, play down the sky and build your photo from the ground up. That’s the lesson of the multilayered picture on the previous page, made by A. Ihdar (“Dadank”) Nur, a college student and photographer in Makassar, Indonesia.

“I just wanted to make a simple silhouette of one of the boys who always play and swim at the Paotere harbor in Makassar,” he says.

But Nur’s photo, which he calls a snapshot, is far from simple. He captured a bicycle touched by golden sunlight in the foreground, a leaping boy silhouetted in the midground, and the harbor and sky in the background. Turning his camera vertically gave the composition more impact.

Nur focused his lens on the boy and metered off both the sky and the bike. At home, he used Adobe Photoshop CS 2 to increase contrast and dodge the bike, bringing the exposure in line with the sky.

See more from him at www.photo.net/photos/dadank_photoart.

All of the familiar elements are here: the fiery orange sun skimming the horizon, its light reflected in the dark sea, even a sailboat bathed in the rosy glow. The standard recipe for a contemplative sunset image.

Not this time. In “West Course,” professional nature photographer Rafael Ferrando Flores of Madrid, Spain, defies all expectations. How? By capturing the speed and power of the boat’s forward motion.

The photo “was taken during a 22-day winter navigation between the Balearic Islands in the Mediterranean Sea and the Canary Islands in the Atlantic Ocean,” he says.

A half-hour before night fell, the clouds broke open and the sun came through. Tacking into the wind, the skipper/photographer switched on his automatic pilot and flattened himself on the deck to keep his camera steady. He used evaluative metering and aperture-priority, which he says is crucial to shooting in such dynamic conditions.

To see more of his work, go to photography.screamtabu.com.

Ignore the sun: Turn around and shoot the reflected light — particularly effective in a city. Zoom in: Crank up your telephoto for the giant fireball effect. Embrace the cliche: If you must go for the postcard shot, make it absolutely gorgeous.

Tips from the experts

Prepare carefully: The light’s at its peak all too briefly, so scout ahead, account for the weather, and plan your composition in advance. Pack right: Bring a sturdy tripod, excellent lenses, and filters (polarizer and split neutral-density). Be there: You have to see the sunset to shoot it. And you have to shoot a lot of sunsets to learn to do it well.

Share your own uncommon sunset photos in our Shoot! Photo sharing forum.