Six Vacation Photos That Can Kill You

Take your camera with you when you travel, but photograph with caution. 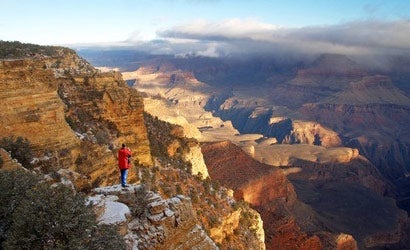 For the serious photographer, a summer vacation isn’t about relaxing or spending time with family; it’s about coming home with stunning shots. And sometimes, there is nothing a photographer won’t do for their dream shot. Unfortunately, some of the world’s most photogenic places come equipped with obvious dangers. There are boundaries that even the most experienced traveling photographer should never overstep (literally). Here are six ways your vacation photos could kill you.

1. Falling into the Grand Canyon

The Grand Canyon is one of the most astounding natural wonders in the world, and every year, five million people visit it.

While the canyon’s beauty is undeniable, what perfect-shot-obsessed thrill seeking photographers fail to realize (or choose to overlook) is how dangerous it is. Although people don’t die at the Grand Canyon every day, deaths are not uncommon, and are usually a result of photo ops gone awry. While some popular scenic outlooks are equipped with railings, others aren’t. In October 2007, a 4-year-old girl fell 137 meters off the edge of the canyon just west of Mather Point, a popular overlook. It’s easy to end up over stepping while trying to get the perfect photo. If you find yourself near an overlook without a rail, just pay attention to what you are doing, and do not follow in the footsteps of this photographer. While the authenticity of this stunt has been questioned, this photographer’s actions were foolish nonetheless.

As the National Park Service puts it, “The difference between a great hike (or photos) and a trip to the hospital is you!” You should definitely take all the precautions that hikers take by not overestimating your abilities, planning accordingly, taking breaks to refuel, and bringing enough water. But also, be aware that a great shot could cost you your life if you get too caught up in the moment.

Yellowstone National Park is a famous site for brilliant photography and home to natural wonders such as Old Faithful. But the nation’s first National Park is also home to thousands of wild animals, and visitors can often forget that it’s not a petting zoo. It’s not uncommon for visitors to be injured by wildlife, especially buffalo.

In the spring when the buffalo are protecting their new young, they can become very dangerous if a human is invading their comfort zone. They seem docile and peaceful, but are complete unpredictable, as this video shows us.

If you don’t keep your distance from these animals, you could be gored to death. On June 28, 2008, Newsday reported that a 12-year-old boy ended up in the hospital after posing near buffalo and being flipped in the air. He was just a few feet away, but the park rules state that visitors must stay 25 yards away from the buffalo.

Luckily, with the advent of the telephoto lens, there is no need to get that close to these creatures in their natural habitat. You can sit back, enjoy the scenery, and shoot away while avoiding an unnecessary trip to the hospital.

Underwater photography, and diving in general, presents a danger for even the most experienced diver/photographer, whether you’re swimming with a school of fish, or with sharks. While there are ways to reduce your chances of being preyed upon by a shark, there are some species of sharks that humans should never dive amongst unprotected. Tiger sharks are one of those species.

The threat of death did not stop photographer Karin Brussaard from booking a photo centric shark expedition to the Bahamas where she was promised the chance to swim along side, and shoot Tiger sharks. Although she arrived home safely, stunning shots in tow, others have not been as lucky. As the Editor’s note to the Pop Photo article cautions, Markus Groh, a veteran diver from Vienna, Austria, was killed by a Tiger shark while on an expedition virtually identical to Karin’s.

The article details the basics of shark photography safety, but the most important rule by far is to NEVER look through the viewfinder for more than 5 seconds.

Unfortunately, the bottom line is, no matter how safety conscience you are, sharks can be deadly creatures, and although you may dream of taking their picture, embarking on an adventure of this kind is something that should not be done on a whim. Consider the risks, and resist the impulse to hit “confirm reservation now” if you haven’t weighed the consequences properly.

Niagara Falls, Victoria Falls, Angel Falls . . . Whether the waterfall you’re trying to photograph is one of the greatest in the world, or a favorite local subject of interest, the danger of death is the same. In Hall County, Georgia, photographer Thomas Campbell was found in a pool of water, and police concluded that it was likely that he slipped on rocks and fell to his death while trying to take a picture. The waterfall of Campbell’s interest was 150 feet high, miniscule in comparison to Angel Fall’s height of 3,212 feet.

When photographing waterfalls from the top of the drop, it’s important to find a stable area to stand, and while it may not provide the optimal vantage point, it could save your life. Creeping to close to the edge can result in death and even if you are being safe, it’s easy to get lost in the moment and slip unexpectedly. Before you venture to the site of the waterfall, consult a hiking enthusiast or park ranger familiar with the area and find out what areas provide the best, and safest views for shooting.

According to photographer Chuck Doswell, “There is no way to take lightning photos without risk. You are likely to be standing near a metal tripod, holding onto a metal cable release in a relatively exposed location in a thunderstorm.” Lightning doesn’t even need to strike you to be dangerous in this case, so all those above statistics surely increase drastically. He says that generally, it is safer inside your car, and you should shoot from within your car whenever possible. He also cautions that lightning is unpredictable, but there are some ways to lessen your chances of being hurt.

Shooting from under a tree doesn’t lessen your risk of being harmed, and wearing insulated shoes won’t prevent any damage. While not all people struck by lightning are killed, often times, your heart stops beating, so it would be safe to have someone with you who can perform CPR, granted they don’t get struck as well.

Being struck by lightning is something most people think is a freak occurrence, but shooting during lightning is never safe.
6. The Wrong Place at the Wrong Time

Unfortunately, sometimes there is nothing you can do to avoid the danger that you may encounter while trying to get a great shot. In March 2008, photographer Julio Ortega was killed while trying to take a picture of steam rising over the New York City skyline from his perch on the Queensboro Bridge.

ABC News reported that an off duty cop, Brandon Colon, drove down a blocked lane on the 59th Street Bridge and ran down Ortega. Colon was later found to be intoxicated.

Ortega was not at fault for this freak accident, he was just trying to capture the shot he envisioned. In fact, his first photography exhibit was set to open days after he was killed.
Before embarking on any kind of photo centric adventure that has the potential to be dangerous, ask yourself if a photo is really worth your life.
Check out some more photo treks with the potential for both danger and great photos!