Which format should you shoot? 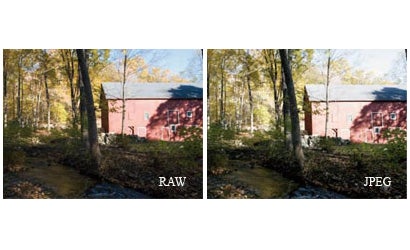 Do you mow yourown lawn, wash your own car, and fix things when they break? Then you should shoot photos in the RAW! No, not nude. I’m talking about setting your digital camera to store images in its RAW file format instead of JPEG. If you’re not even sure what a RAW file is, you’re not alone-as we learned from a recent online survey of more than 2,500 visitors to www.PopPhoto.com: While a vocal minority of Pop Photo Forum members (and many pros) swear RAW is the only choice for real photographers, my own experience supports the survey results.

All digital cameras come out of the box set to store images as JPEGs. There are advantages to keeping this setting, especially for digital rookies.

JPEG files lock in the camera’s image-quality settings-white balance, exposure, sharpening, and contrast-and compress the image data so that more images can be stored on the memory card.

You can adjust the level of compression: Lower compression ratios (with the Fine quality setting) result in larger files with better overall image quality than highly compressed (Normal) files. A Fine JPEG takes up about one-third to one-fifth as much space as an uncompressed image, with little discernible loss in resolution or detail.

A Normal JPEG may take up one-tenth to one-twentieth the space, but with noticeable compression artifacts and loss of quality. Many DSLRs and higher-end compacts have image sensors capable of capturing 12 bits or more per color.

JPEGs can store only up to 8 bits per color, so some potentially useful shadow and highlight information is tossed when the camera saves a photo in the JPEG format. However, JPEGs can be opened in any imaging program or free utility, and are preferred by many online photo processors.

The RAW format, however, usually stores all of the info the image sensor generates, including the extra bit depth (note extra shadow and highlight details in the RAW image below).

As a result, RAW files usually require more storage space than Fine quality JPEG files. And since each camera manufacturer decides what form that RAW data takes, you’ll need a special filter or conversion utility to view the image.

RAW files must also be converted into JPEG or TIFF files before they can be used for printing or e-mailing. But converted RAW images will look better-especially if you’ve tried to capture a high-contrast scene, accidentally missed the correct exposure, or had your camera’s white balance fooled.

Despite RAW advantages, I shoot in Fine JPEG mode most of the time. When I do see a photo that might benefit from RAW storage, I usually set the camera to RAW + JPEG. That way, I have the best of both worlds.