How to realign a face, shift your stance, and more. 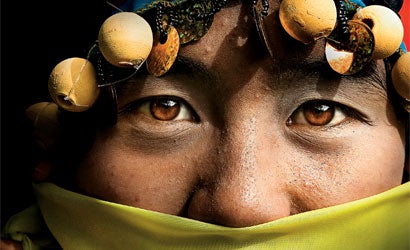 • Fundamentals: Unconventional framing, use of color and light to define space.
• Unusual framing: Usually a full-face portrait is centered, but space around one edge (A) and a crop from the top (B) create visual tension. Though including a hand is sometimes considered a no-no, here it works as a pointer to the subject’s eyes. Complementary colors, yellows (C) against blues (D) , also create visual tension in the framing of the face.
• Exposure: Slightly underexposed, which deepens color saturation and sets a mood of mystery.
• Lighting: Sidelight makes for striking modeling of the face. Areas away from the eyes fall into shadow. Eyes have the all-important catchlights (E) .
• Rule of Thirds: The true subject, the eyes, are aligned at the gridline of the top vertical third (F) . Her right eye lines up at the “power point” of the upper left gridlines.

3 Ways to Get an Offbeat View

Most of us tend to shoot from eye level. That’s why a photo with an unusual vantage point will catch viewers’ attention — it lets them see the ordinary in an extraordinary way. And it’s usually pretty easy:

If your subject is close to the ground, flop down on your belly (or use that tilting LCD monitor) to shoot from its level. Variant: Get low and shoot upwards to show the underside.

Try to find a high place to shoot down on your subject. A waterfall, for example, can look more dynamic if you shoot down from its lip, rather than frontally from its base.

Instead of shooting from the outside looking in at your subject, try to get inside it and shoot out. Capture an autumn tree, for instance, by leaning against its trunk and shooting the branches extending away from you. After I took the conventional exterior picture of a Greek tholos (“beehive”) tomb (left), I ventured inside. The interior view (right) captures its majesty and mystery more effectively. — Timothy Edberg

Flash exposure compensation (FEC): One of the most important controls on your camera, this is the “output valve” for the built-in flash. Many recent digital and film SLRs have it, as do some digital compacts.
• Where it is: Some cameras have a dial that does it directly (wonderful). Many have an outside button that brings up the setting on an LCD panel (not so hot). Still more have it completely buried in a menu (ugh). Check your manual.
• What it does: Cameras automatically control the output of the flash to give you a standard flash exposure. FEC lets you increase or decrease the flash from the standard, independent of the ambient exposure.
• Why: Standard flash exposure is often the most boring (when it matches the backlighting of objects), and unflattering (when it illuminates faces too much in outdoor portraits). Most flash pictures taken in bright ambient light benefit from reduced flash output.
• How: Standard flash exposure is expressed as 0.0 compensation. From there, you can dial up or down, measured in stops. One stop more output is +1.0. A stop and a third less is -1.3. A good range to try with flash in bright light is -0.7 to -1.7.