Picture Doctor: 5 Ways to Lighten Up With Flash

Take a fresh look at man's best friend, get creative with your flash and other photo remedies. 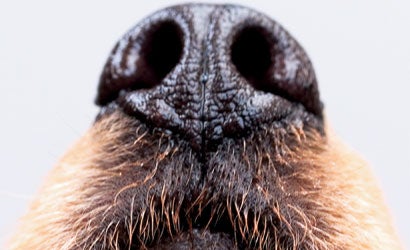 • Angle: At first, we thought this was a very hairy extraterrestrial. The view from below is initially startling, then hilarious. We’ve seen in-your-muzzle pet pictures before, but this one is truly that elusive “different take.”

• Close focus: What also makes the picture is the fine detail in the fur and the nose — it makes you feel cold and wet and warm and fuzzy all at the same time. The focus and depth of field indicate that this was no grab shot.

• Lighting: Impeccable. Every whisker stands out.

• Framing: Filling the whole frame adds to the effect, as does the absolutely plain background.

• Fun factor: We all take photography too seriously at times. Shots like this show us that goofing around and making worthwhile images are not mutually exclusive.

5 Ways to Lighten Up With Flash

Too many people use their camera’s built-in flash only for indoor pictures, but you can pump up your photos with flash more creatively. Just about every camera made today has an automatic fill-flash setting that will augment, but not overwhelm, the main light source. Most DSLRs also allow you to adjust the fill-flash output (“flash exposure compensation”), as do many compacts.

1 Pictures taken in direct sunlight tend to be overly contrasty, with inky black shadows. A judicious dose of flash adds enough light to the shadows to reveal their detail without lightening the picture overall.

2 For portraits of people or animals, flash, even at a very low power, adds catchlights, those twinkly highlights that bring eyes to life. (Try -1.7 or -2.0 EV, if you have adjustable flash output.)

3 In the same vein, a low-power flash will add sparkle to reflective, textured surfaces, such as a lamé dress, without otherwise altering the image.

4 Taping over the flash with colored plastic film — such as cellophane, acetate, or photo gels — lets you mix flash of one color with ambient illumination of another for creative lighting effects. A colored flash used for fill makes another interesting effect: Shadows are a different color than the midtones and highlights.

5 Outdoors at dusk, foreground objects often appear as featureless silhouettes. To add visual interest to twilight photos, pop that flash to reveal the foreground. This is how I got detail in the Joshua tree in the lower photo at right. — Timothy Edberg