Rick Smolan's newest photo book focuses on the emotions of the American home -- just as the housing market struggles for survival. 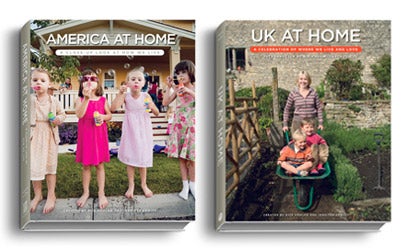 It probably takes a genius or a well-meaning fool to bring out a big new book paying tribute to the American home right now. With the country reeling from the subprime mortgage crisis and many homeowners facing foreclosure, who would want to pore over a richly-produced volume that pays tribute to idea of friendly domicile?

Photographer and book packager Rick Smolan thinks this is the perfect time for such a book, and I don’t know anyone who considers him a fool. Along with his sometime-collaborator David Cohen, Smolan created the hugely successful Day in the Life of series of photo books. He and his wife Jennifer Erwitt (daughter of photographer Elliott Erwitt) have produced a number of books on their own, including Smolan’s latest, called America At Home (Running Press, $40).

As in previous books, Smolan has captured a portrait of Americans living in real time. In this case, he assigned 100 photojournalists to document people and their dwellings over the course of seven days. In addition, he invited thousands of amateurs to photograph their own homes, ultimately receiving about 250,000 digital images. The material was edited down to the 250 pictures that would eventually appear in the book.

The photographs reveal not only the distinctive architecture of America, but also the distinctive and varied emotions that make up the idea of home. The book is also stuffed with facts about Americans and their homes. (For instance: “American children today average an hour less sleep per night compared with 30 years ago.”) There are also essays written by Matt Groening, creator of “The Simpsons,” New York Times columnist David Pogue, and novelist Amy Tan.

Smolan is known for his marketing and technological acumen, both of which are displayed in the new project: As he did in his groundbreaking book America 24/7, Smolan has created a website, myamericaathome.com, that allows buyers to drop an image of their own family (or home, or pets) into a template and order a custom-made wrap-around jacket for the volume.

He also lined up a group of sponsors to cover the production cost of the book. The primary sponsor, IKEA, will also provide a valuable distribution outlet for the book. With the backing of IKEA, Smolan also produced a similar book about the idea of home for the United Kingdom, shot entirely by British photographers. That book, with an introductory essay by Sir Paul McCartney (his daughter Mary was one of the photographers on the project), will launch later this month.

Smolan recently dropped by the American Photo offices to chat about his new project and what it means for photography. In an era when magazines no longer have the space or budget for large photo essays, the books he produces may point to one type of future for photojournalism.

AP: How did the idea for a book on the American home come about?
RS: I have two children, Phoebe, who’s eight, and Jesse, who’s five, and Phoebe went on her first sleepover last spring, and she was really nervous about it. The next morning she was full of beans about how she survived this big event. And on the way back I asked her what was the one thing she would remember forever about her first sleepover. And she leaned over and whispered, “Dad, did you know that other people’s lives are different than ours?”

AP: And that question got you to thinking about showing how people live differently within their homes?
RS: Phoebe actually said, “Papa, why don’t you do a book about how people are the same but different in their homes?” I thought, that’s really interesting. It would be something like A Day in the Life of America but focused on the way people relate to their homes. When you ask people about their memories of home life or childhoods, you see them fall into this pool of memories. The smells and sounds of the rooms they lived in. Home isn’t just a place, it’s actually woven into the fabric of our personalities. I thought that if you could capture the emotions of home in photographs, it would be so cool.

AP: This is certainly an interesting moment in American history to be focusing on people’s relationships with their homes.
RS: Somebody asked me, how can you do a book about homes during the worst housing crisis ever? And my reaction was, every news story you read about the crisis is all about money, money, money. But this book actually shows why it’s so poignant that people are losing their homes.

AP: You do cover the fact that people are losing homes.
RS: Even though this was a sponsored book, like all of our books, those sponsor companies had no editorial review or control over the product. We’re a group of photojournalists, and the book isn’t a Hallmark card about home. There are homeless people in the book. There are people being thrown out of their homes because of subprime mortgages. There’s a statistic included that says that more than two million Americans were evicted from their homes in the last 12 months as a result of the subprime mortgage crisis.

AP: Yes, but overall most of the pictures present a positive view of American lives.
RS: I think that’s an accurate assessment of our lives. It wouldn’t be journalistically accurate merely to show how much pain there is out there. Most people are fairly happy in their lives.

AP: Sometimes I think photojournalists and editors forget that.
RS: Absolutely. There’s this idea that the only right way to show the world is by showing all the horror that exists out there. But I don’t think that’s right.

AP: How do you select the photographers for a project like this?
RS: A lot of them are people we know and we’re sure they’ll produce something great. But we also look for new people we’ve never worked with because they can bring so much energy to the project. We look for people based on location and subject matter, too.

AP: How long does it take to produce a book like this?
RS: We start about three or four months in advance of when the photographers go out into the field. We have a whole team of researchers who set up assignments. It ends up looking spontaneous, but it’s spontaneity on top of a lot of planning. Then we always tell the photographers that despite the assignments we set up, if they get out into the field and find a better story, go with that. I’d say only about half of the images in the book came about from the assignments we set up in advance.

AP: This is the type of photojournalism that used to define magazines.
RS: The pictures in the book are obviously important, but they don’t live on their own. The essays don’t live on their own. The statistics don’t live on their own. But when you weave them together you get something really powerful. Doing these books is like putting together a jigsaw puzzle, and you’ve got all the pieces but you’ve lost the box the pieces came in, so you don’t really know what the picture is that you’re supposed to be making. So you put it all together and say, “I hate that,” and you throw it out and then start over. We had a wonderful designer, Brad Zucroff, who had the unenviable task of taking these 25,000 pictures and trying to figure out how to put them together. He was helped by photo editors like Karen Mullarkey, Eliane Laffont, and Michele Stephenson.

AP: Magazines just don’t do that kind of photojournalism anymore. They don’t have the space or budgets.
RS: This book represents an interesting trend in terms of publishing photojournalism. No publisher can afford to do the kind of books I do. We’re not trying to do books as cheaply as possible. We do French fold covers, where the cover jacket has a extra fold at the bottom, and thick mat paper with a fifth-color varnish that makes the images pop. These are very costly. The publishers we work with are distributors, but we deliver a final product. And we can charge $40. That’s the same as we charged 20 years ago, but the prices for paper and ink and printing have all gone up. And the way we manage that is by getting sponsors.

Features
How to
Photo Books