Photography on the Couch

You don't have to be crazy to be a photographer, but... 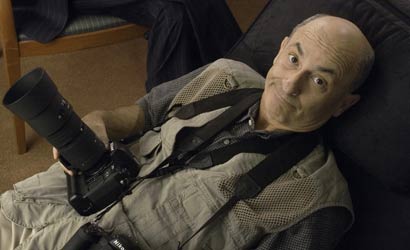 “Basically, everybody who can take pictures, does. This is something really, really deep,” says Dimitrios Deliz, a leading photo industry analyst. “Why did digital photography take off so fast? Why does 80 percent of the population take pictures? It must be something close to our being.”

But why? Photography has been the country’s number-one pastime for about 100 years, so there shouldn’t be much of a mystery about our reasons for snapping away. Marketing surveys show kids, pets, and trips are still the main subjects. And although photography is often seen as a particularly male hobby, women make up the majority of people who buy point-and-shoot cameras, as they have since Kodak introduced its 100-shot, preloaded box camera in 1888.

But people take pictures for purposes beyond saving memories and sharing experiences. In a 2006 survey by the Photo Marketing Association, 62 percent of camera users said they took pictures “for pure enjoyment,” while 50 percent “just like to.” Some 13 percent want most “to master the skill involved,” and 11 percent do it for “artistic expression.”

What is it about photography that enables more than 26 million people to declare themselves artists? What’s going on behind the viewfinder?

The Freudians spotted something early in the photography craze because they kept hearing about cameras from the psychoanalyst’s couch. This set off speculation into the deeper impetus, unconscious motivations, and hidden meanings of taking pictures. You can mark the very date when shrinks first tried to enter the darkrooms of the soul: On November 5, 1924, at a meeting of the British Psychoanalytic Society, two papers were presented: “Photography as a Pseudo-perversion” and “Camera as a Phallic Symbol.”

Bristle though you may, there might be something to this. Think of the spectrum of photophiliacs: the gear-hoarding obsessive, the narcissistic self-portraitist, the fetishist who only shoots pictures of red things, the self-kidders behind all those flashes in the stadium’s upper deck when something momentous happens down on the field. Don’t you just want to RATTLE THEIR MIDGET BRAINS RIGHT OUT OF THEIR SKULLS?!!

Of course you don’t, because the Freudians were wrong, and you’re not an aggressive pseudo-pervert. Right?

At about the same time Sigmund’s minions took us on, photography was dividing into the three main subgroups that marketers still recognize today: the pros, the consumers (95 percent of the camera market), and the enthusiasts — the early adopters who always go for the latest gadgets, and the aesthetes who’ve pushed photography into the realm of fine art.

But consumers and enthusiasts seem to share a common motivation. “My perception is that when pictures are being taken, it’s a prolonging of the moment, a justification for our being,” explains Deliz, the director of research for the PMA. “We don’t want something to end. Showing the pictures is a way of extending the experience.”

As for the finding that preserving memories is the driving force of photography, he says, “It’s kind of weird. We wake up and do things every day to avoid thinking about our own death. But to preserve memories to me doesn’t make sense, because the pictures show your progression toward death. The positive motivation is more dominant — the camera can be with you anywhere to capture the excitement and keep it with you, until the next death-avoiding activity.”

Psychologist Greg Feist has a similar view. “There’s a fascination for capturing lost time,” he says. “People may be congenitally sentimental. What drives us is the need to capture that fleeting but eternal moment.”

Feist, a professor at the University of California, Davis, and the head of the American Psychological Association’s Society for the Psychology of Aesthetics, Creativity and the Arts, is also an avid landscape photographer who built his own darkroom. He sees several distinct psychological traits among the photo-enthusiast tribe: Buying the latest gear can become a compulsion, and getting the picture just so appeals to the perfectionist. And photos cater to the subconscious longing for meaning.

“Photography does appeal to the kind of person who is trying to capture life,” says Feist. “It’s a way to hang on, to be connected. It can show change and stability of personality over time. There’s something about the camera that we like to think is objective, but we all know it’s subjective. What we leave out, what’s implied in the image, is the true content.”

He notes that photography connects us to a primitive, primal self, a vestige of the lost epochs when we communicated through pictographs instead of language. “Freudian analysis is somewhat passŽ, but Freud was clearly onto something with his theory that these unconscious, preverbal kinds of thought pictures, like in dreams, are who we are, basically.”

A 1955 paper published in the journal Psychoanalysis, by the Freudian analyst Carl Fulton Sulzberger, wields a sharp scalpel — or is it a scimitar? — to lay bare our hidden urges. Titled “Unconscious Motivations of the Amateur Photographer,” Sulzberger’s article rains down painful truths like brimstone. To wit:
“Thus photography starts out as a voyeuristic thrill and ends as an act of exhibitionism.”

Then: ” … The hunting and shooting of the subject suggest the aggressive and sadistic pleasures of the chase, faint though they may appear in consciousness.”
And don’t forget: “The close relationship between photography and peeking is clearly demonstrated … “

He uses a patient’s dreams and association of thoughts to “reveal the camera as a symbol of an organ of reproduction.”

Sulzberger asserts that photo equipment holds a “meta-psychological fascination” for men. “The intricately fashioned, glittering tubes and shining lenses hold for them something of the appeal that jewelry does for women.”

The paper concludes that while most of photography’s gratifications are functions of the ego, the act of taking pictures is also id-driven, allowing satisfaction of the basic urges to see (voyeurism) and to show (exhibitionism) “in a socially acceptable manner.”

Modern shrinks have a more nuanced view of the photographic mindset. Dean Simonton, a UC Davis psychology professor who has published widely on the cognitive functions of creative artists and scientists, remembers his father converting a bathroom into a darkroom; now his daughter is an avid photographer who posts pictures on the web.

“The common denominator between my dad and daughter?” he asks rhetorically. “An opportunity to be creative, a chance to capture a special image to share with others, a means of becoming more aware of the world that surrounds us all? Some combination or interaction of these? Your guess is as good as mine.”

William Reid, a forensic psychiatrist and professor at the University of Texas, is a committed photographer. “Lots of psychiatrists,” he wrote in an e-mail, “often ones who take their work too seriously, would cite a wish by technical people to become artistic, wishing fervently for a larger right-brain. Or a wish to capture and control the things we see, to hold the beauty or the moment forever. Or on Freudian things like voyeurism (yes, I’ve done my share of nudes, too).”

Reid said he was amazed by “the panoply of lenses, camera bodies, filters, shades, flashes, tripods, et cetera” that some photographers carry. He attributes this not to the need to display bling, but to a longing for a sense of control, “being prepared for any photographic eventuality, or looking as we think professionals appear.”

There hasn’t been a scientific study of photographers’ motivations since the 1955 Sulzberger drive-by. But researchers now include photographers in the category of artists, and there have been plenty of studies into the nature of creativity.

Creative scientists and artists, including photographers, score high in tests on a personality trait called psychoticism. It’s a collection of attributes that put you about halfway to the nut house, with the potential to go completely ape. “Higher psychoticism scores were also reported among psychopaths and criminals,” reads one of many studies linking creativity and madness.

Cognitive scientists have established that highly creative people are about twice as likely to suffer a mental disorder as regular, boring people. But most creative types don’t go over the edge because (A) they’re not geniuses, so they’re exempt from the well-documented “price of greatness,” which links increased talent with increased psychoticism; and (B) tests show they also have traits that blunt the psychopathology, such as ego strength, openness, an ability to solve problems in a novel way, and higher-than-average intelligence.
“Accordingly, [creative individuals] can exert meta-cognitive control over their symptoms, taking advantage of bizarre thoughts, rather than having the bizarre thoughts take advantage of them,” wrote psychologist Dean Simonton in the June 2005 issue of Psychiatric Times, in a paper titled “Are Genius and Madness Related?”

For this article, I confined my own unscientific inquiry to internet forums. On Flickr.com, the online photo sharing site, about 30 people posted just more than 50 responses to a question about why they take pictures. Their thinking seems to confirm the mystical, irrepressible attraction photography holds for many people. (For the full Flickr discussion chains, check here and here.)

“I do get ego feeding out of exhibiting photos,” writes a union organizer in Portland, OR, who calls himself Old Sarge. “But I’d hardly call it exhibitionism. My job can be a giant ego-crushing activity and I could use an outlet from that … “

States Ulrich Schnell of Denmark, “I could characterize myself as an amateur photographer, but I am also a certified nutcase, so I am not entirely sure I fall within the boundaries of your study. There is the straightforward fact that I do it because I like it. On the other hand there is an explicit therapeutic goal, too … You could say I use it to keep my mind open to reality in a controllable manner.”

Garry Nixon, an Englishman, seems to confirm the psychologists’ view that snapping a picture is an attempt at sequestering eternity. “It’s a bit like planting trees to me,” he writes. “The buzz is that people might still be enjoying them when I’m long gone. As such, maybe it’s a stab at immortality?”
So perhaps market researcher Deliz is right: A grab for immortality entails an intense awareness of one’s own mortality. This sounds less like a pseudo-perversity and more like the human condition.

The responses on Flickr were so thoughtful and full of insight, they could have come from shrinks. Come to think of it, nearly every psychologist and psychiatrist contacted for this story turned out to be a photographer, too.

“Damn, thought you wouldn’t notice,” remarks William Reid, the forensic psychiatrist. “And given that the minds are similar, it is much cheaper to contact a photographer when one is feeling a little spacey.”