NGOs to the Rescue

Most photographers cannot solely depend on magazines and newspapers to fund long-term projects. Instead, they have found a new strategy -- working with nongovernmental organizations (NGOs) to get funding and distribution for their projects. 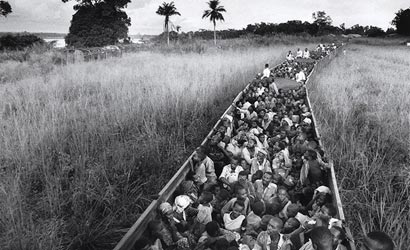 Phil Borges knows that more and more photographers just like him are pitching projects to organizations such as Coalition for the Homeless rather than publications like Time magazine. Why? Well, that’s another question. Borges says simply, “It’s in the air.”

The real answer is more complicated, but the result has been clear for social-documentary photographers nonetheless. In recent years, new opportunities have opened up, allowing them to make, exhibit, and publish work that has little chance of being seen in magazines. It’s not that such photography is suddenly enjoying new popularity. Rather, a perfect storm of factors has coalesced to create a remarkable trend. Nongovernmental organizations (NGOs) like Coalition for the Homeless have proliferated in the past 20 years, while the conglomeration of media companies into fewer hands has reduced the number of editorial outlets for photographers. Those that remain are not likely to fund in-depth, long-term photojournalism projects. Meanwhile, the Internet enables NGOs to form coalitions easily and cheaply, enhancing their reach and providing photographers with a potentially vast audience.

Thinking Outside the Page

Most NGOs have traditionally thought of photographs as primarily a way to break up text in annual reports or to document relief efforts in their fund-raising materials. Not so anymore. Daniel Morel, who worked for the Associated Press as a photojournalist in Haiti for 14 years, is collaborating with the NGO Circles of Change to host exhibitions of his photos in Haiti and New York City. These shows, additionally funded by the Open Society Institute’s Documentary Photography Project (see page 2 “New grants new solutions”), will serve as focal points for discussions about empowerment of underprivileged citizens.

As NGOs have proliferated, they have also become more visually sophisticated, looking beyond traditional black-and-white photojournalism. To inform the public about her work to eradicate diseases like black fever and diarrhea, Victoria Hale, founder of OneWorld Health, the first not-for-profit pharmaceutical company in the United States (and recipient of a $46 million grant from the Bill & Melinda Gates Foundation), uses colorful images of Indian families shot by Newsweek contract photographer Jonathan Torgovnik. “We in the West imagine poverty and disease as something that is horrible, fear-inducing, dramatic, and therefore hard to get close to,” Hale says. “Jonathan captures beauty in all of his work, which draws viewers into the image, and thereby closer to the cause or message, rather than scaring them away.”

The collaboration between a photographer and an NGO usually starts with a photographer’s burning desire to tell a story. The trick, for both photographer and NGO, is finding a collaborator with similar interests. “I saw a small Associated Press report on famine in East Africa,” says Roger Lemoyne, who has won awards from the National Press Photographers Association and World Press Photo and is represented by the Redux photo agency. “Just a decade earlier such a story about Ethiopia was huge news and had galvanized the world to take action with events like Live Aid. But now there was just this 100-word wire-service story. I immediately decided that I would go to East Africa and find out what this was all about.” Before leaving for Nairobi on his own coin, Lemoyne contacted UNICEF, which commited to give him a day rate if he started shooting pictures it needed. Lemoyne stayed in East Africa for five months. It was the start of a great body of work and a relationship with UNICEF that would last more than a decade.

A Strategy, Not a Marketplace

While the NGO sector is now the eighth-largest economy in the world, worth more than $1 trillion a year globally, Fred Ritchin of PixelPress warns, “It’s a strategy, not a marketplace.” In other words, don’t think of it as a place to get a job; think of it as a potential resource to help you mount a personal project.

In out-of-the-way places, NGOs such as Doctors Without Borders can provide transportation to remote communities. Sometimes NGOs provide unforeseen gifts. Phil Borges decided he wanted to go to Tibet to shoot some portraits after meeting a woman from Tibetan Rights Campaign. The group set Borges up with contacts, an interpreter, and an appointment with the Dalai Lama. “I’ve never been paid for my time,” says Borges, who spent more than $20,000 of his own money on four journeys to Tibet, “but it always comes back in some way.” After his final trip, Borges exhibited the portraits and sold prints. When he published them in a book called Tibetan Portrait: The Power of Compassion, the NGO arranged for Nobel Prize-winner Elie Wiesel to write the epilogue. “We’re partners,” Borges explains. “Our goal is to get the images out there — it’s a symbiotic relationship.”

As productive as collaborating with an NGO can be, it usually means the photographer is working in the service of the NGO’s specific goals, which can dictate where the photographer goes, what he or she shoots, and which images will ultimately be displayed. One alternative to working with an NGO is getting a foundation grant, which enables the photographer to design his or her own framework. “When you do your own work, you do what you want,” says Ed Kashi, who obtained a Robert Wood Johnson Foundation grant to shoot his seven-year project on Aging in America, collected in a book by powerHouse in 2003 and in online multimedia exhibitions. While the project also relied on help from the NGO Open Society Institute, Kashi says the Johnson grant provided a great deal of independence: “We spent 23 weeks in the field without anyone telling us what to do. We were green-lighted to pursue our vision.”

Pitching to a foundation can be complicated. You may pour through mountains of material to find the foundation that’s right for you. You will need to create a detailed budget that accounts for every penny you’ll be spending. And you’ll have to have 501(c)(3) not-for-profit status — either your own or under the aegis of an umbrella organization.

Rather than partnering with an already existing NGO, many photographers create their own, which they target to a specific cause such as empowering poor communities through photography. The biggest reason is economic: When you get your 501(c)(3) status through an umbrella organization, you have to give them anywhere from 6 to 13 percent of the funds you raise. And the government considers those funds taxable income. When you create your own not-for-profit, you keep all the money you raise — and it’s tax-free. The process of starting an NGO can be long and costly, but many lawyers will donate time if they’re sympathetic to the NGO’s mission.

Collaborating with an NGO often brings credibility to a personal project that otherwise might slip by potential funding sources. “Working with an NGO will usually help you get grants,” says Amy Yenkin, director of the Open Society Institute’s Documentary Photography Project — the group that funded Daniel Morel’s Haitian exhibitions. A collaboration between photographer and NGO can also create a kind of gravity that attracts further collaborators, often from the business or private sector.

When Steven Katzman, author of the 2005 book The Face of Forgiveness (powerHouse), began a personal project shooting portraits in a neglected African-American community in Sarasota, Florida, an NGO took notice and contacted a local governmental agency. Funding from the city and county followed. Local banks stepped in, and the Chamber of Commerce began soliciting donations. Then Katzman, a teacher at Ringling School of Art and Design, contacted Bogen Imaging. “When I told Bogen I was doing this project, they gave me equipment at a substantial discount. When I told them students would be involved, they gave me two of everything free.”

Phil Borges has found generosity within the photo industry: Getty Images donates office space to Borges’s NGO Bridges to Understanding, while Hewlett Packard has printed an entire UN exhibition of his work for free.

For many photographers, the impetus to do personal work grew out of their frustration with the paradigm shift in the print industry that has quantitatively and qualitatively reduced their editorial options. As photographers are finding alternative means of funding the work they want to do, they’re experiencing a new sense of creative — and ethical — liberation. Moreover, many of them are making a living at it. As Phil Borges says, “There’s a magic to doing work you believe in.” Maybe that’s what’s in the air.

For the past 15 years, the Open Society Institute and Soros Foundations Network (OSI) has supported socially conscious documentary photographers with its evolving grants and exhibitions. Its latest conception, the Documentary Photography Project, bestows yearly grants on photographers to help fund distribution strategies designed to impact the communities they photograph.

“We’re interested in funding photographers who have made a deep commitment to the community they work in,” says Amy Yenkin, who has directed the project since its 2003 inception. “They have started early, thinking how they want people to engage with and react to their work.”

Eric Gottesman’s project for the NGO Hope for Children is a prime example. His OSI grant helped him display his images of AIDS-stricken Ethiopians in open-air exhibits around their country. Gottesman set up his displays near community hubs such as a market or a water reservoir, and held coffee or tea ceremonies to put people at ease. By incorporating his understanding of Ethiopian culture into his distribution strategy, Gottesman drew about 4,000 viewers and encouraged discussion about an epidemic that is still taboo in much of the country.

Distribution grant applicants must also be supported by an organization besides OSI, such as an NGO or a publisher. In its research, the OSI discovered that photographers working with such partners were more likely to effect tangible changes than those working alone.

For instance, Marcus Bleasdale’s photos were presented in conjunction with the Human Rights Watch report The Curse of Gold to illustrate the human cost of natural-resource exploitation in the Democratic Republic of Congo. Together they triggered reforms, including convincing one multinational gold company to halt the purchase of “tainted gold.”

Duke University Guide to NGOs
Includes database of NGOs around the world dealing with human rights, the environment, and women, as well as tips on conducting your own research.
docs.lib.duke.edu/igo/guides/ngo

UN Department of Public Information on NGOs
A directory of NGOs associated with the United Nations.
un.org/dpi/ngosection/dpingo-directory.asp

Volunteer Lawyers for the Arts
Advocacy and legal services for artists.
vlany.org

Alaska Conservation Foundation Daniel Housberg Wilderness Image Award for Excellence in Still Photography
A $1,000 award is given to projects advancing the protection of Alaska’s wilderness and the discussion of related issues.
akcf.org

Dorothea Lang-Paul Taylor Prize
The Center for Documentary Studies at Duke University annually awards $10,000 to a writer and a photographer in early stages of a collaborative documentary project.
docstudies@duke.edu