Darfur: Twenty Years of War and Genocide in Sudan provides an overview of the crisis in Darfur and shows you how to help. 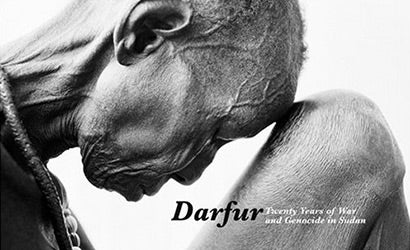 “Never Again” is perhaps the most complex and loaded phrase in contemporary history. Since it became a common slogan in reference to the Holocaust, it has been used again and again — in reference to the genocide in Cambodia, and more recently, Bosnia and Rwanda. The agonizing thing is, of course, that the phrase should never have needed to be used once; and it shouldn’t have ever been used again.

The ongoing crisis in Darfur since February 2003 is the current Never Again moment. Since the Sudan Liberation Army took up arms against the government in the North, minority Christians in the south have been under constant attack from government-sponsored Arab militias (known as janjaweed). Rape is a common form of torture, and an estimated 400,000 Sudanese have been killed and another 2.5 million have been displaced. For the refugees, who are living in extremely poor conditions without food or medical treatment, life is a daily horror.

It is, in short, the stories and the pictures that in the future we will see and wonder why we did not prevent — as we have wondered with horrors in the past. And activists who are trying now to rally support for intervention face the daunting task of making “Never Again” a reality rather than just a slogan.

While Darfur: Twenty Years of War and Genocide in Sudan isn’t the first photobook to be published on the crisis, it takes perhaps the most direct approach. The photos (from such renowned war photographers as Colin Finlay, Pep Bonet, and Lynsey Addario, among others) capture each of the core elements: the military, the refugee camps, and the medical facilities. Many of the photos are hard to look at, as are many of the testimonies that accompany them.

The photos are accompanied by concise essays that offer facts and historical perspective on the region and its people. Contributors include Larry Cox, executive director of Amnesty International, movie star activists Mia Farrow and Ryan Gosling, and New York Times columnist Nicholas D. Kristof, one of most outspoken proponents of intervention. Kristof’s essay, titled “If Not Now, When?,” offers a detailed plan for ending the crisis.

On Tuesday, May 29, President Bush imposed sanctions against the Sudanese government and called for UN-enforced sanctions as well. This is a good step, though not enough on its own. Other important steps that Kristof proposes are: sending peacekeeping troops to neighboring countries (such as Chad, where many of the refugees have fled and whose government has invited US troops), enforcing a no-fly zone; using leverage on members of the international community who are quietly supporting the crisis (i.e., Russian and China), and opening talks with the Arab and African communities on a peacekeeping solution.

As Larry Cox points out in his essay, the situation won’t improve until citizens pressure their governments to take action. Darfur provides links and resources for readers to want to help, and, powerhouse, the book’s publisher, is donating all proceeds from author royalties to Amnesty International and the Genocide Intervention Network.

For three (easy) things that you can do to help right now, go to the next page.

1. Sign a petition. Save Darfur, an international coalition of non-for-profit humanitarian organizations, has an open, short, general petition here asking your local representative to support ending the crisis. The letter can be edited in the chance that you don’t agree with any part of it.

3. Donate. Save Darfur is a reputable and worthwhile source, as is Amnesty International and Genocide Intervention Network.

If you have done all of these things and would like to get involved still further by planning events and attending demonstrations, join a local community group. Find one under the Get Involved toolbar at www.savedarfur.org.