A look at how NASA is using the Kodak DCS 760 to document everything from space shuttle launch damage to glacial melt, and capturing some breathtaking images in the process. 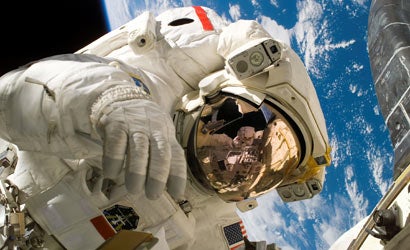 For decades now NASA has been a huge fan of film. Would Edwin “Buzz” Aldrin’s 1969 moonwalk, shot by Neil Armstrong with a Hasselblad 500EL, look as crisp in digital? Houston’s Mission Control thought not, and kept the Hasselblad operational for years. But then came the disintegration of the shuttle Columbia in 2003, and Houston realized it needed to thoroughly examine an orbiter before it returned to earth.

For its new camera NASA chose the Kodak DCS 760, a 6MP digital SLR built around a Nikon F5 chassis. The 760’s primary mission is to conduct a painstaking search for launch damage as small as one inch from a distance of 600 feet. The images are downlinked via the Tracking and Data Relay Satellite System for closer inspection. All 760s are off-the-shelf save for a special lubricant, to prevent it from evaporating in the vacuum of space.

As for the International Space Station, it’s been all-digital from the moment a permanent crew set up home in 2000; film stored in space for months inevitably fogs from radiation exposure. While the 760s on board aren’t for glamour shots of astronauts doing cool stuff like planting flags, they’re not all informal snapshots of astronauts working and eating, either.

Inhabitants are assigned official “Crew Earth Observation Targets,” like the recent grassfires over southern U.S., hurricanes weather systems, and even the total eclipse of the sun earlier this year. “We’re interested in photo documentation of what we see,” explains astronaut Bill McArthur, who returned from a six-month stint on the space station in April. “It’s an important part of humans’ experience in space.”

For those ground pictures, McArthur Velcroed one 760 body with a 180-mm Nikkor lens beside the window in the U.S. lab module. He used a second one with a flash attachment to record experiments, often in intervalometer mode. “Near the end of the mission I tried to take pictures of every square inch of the station because it’s a great value for folks on the ground — the condition of the equipment, how we had things laid out,” McArthur says. Two other bodies are attached by a frame to the chest of extravehicular activity (EVA) suits, covered with thermal blankets against the cold of space. Again, the subject matter can be unusually banal: documenting the bolt-by bolt installation of a new gyroscope, maybe.

Someday someone will shoot somebody planting a flag on Mars, but it probably won’t happen in our lifetime.

Let’s say you find yourself as a tourist in space, and you want to take snaps for the folks back home. “My biggest tip is to take lots of pictures,” says McArthur. “That was my general rule of thumb.” He had a different reason, though: “Even if I didn’t have any idea what it was, people on the ground could figure out anything pretty quickly.”

One more tip: To pick up background stars you’ll need to use a shutter speed of anywhere from one to 30 seconds. With your spacecraft constantly in motion, however, everything else will show up blurred. So it may be tough convincing Flat Earth Society skeptics that you weren’t inside some secret anti-gravity simulator near Area 51.
LINKS
Cameras Used on the ISS and Shuttle Missions by NASA Astronauts to Photograph Earth
Metadata: Film Types and Electronic Imaging Formats Used by NASA Astronauts to Photograph Earth
Keep up with the latest NASA news at http://spaceflight.nasa.gov/.