Environmentalist Birte Person went from saving frogs to shooting them -- and other endangered wildlife. 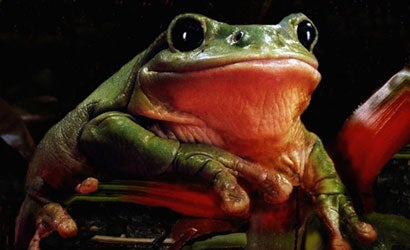 “Photography for me is a tool to help protect our natural world,” says Danish-born photographer and environmental activist Birte Person.

The 60-year-old former art teacher, living in Corrimal, Australia, has been a nature-lover since childhood, when she collected various insects. Involved for about 25 years in conservation, in 2004 she devoted herself to it full-time and now travels to remote locations to photograph endangered wildlife from tigers to parrots to beetles.

But photographing endangered frogs is her greatest passion, and she does that in her backyard. It started when she found out that local developers were draining ponds intended for frog preservation. She gathered frog eggs and brought them home to a pond she and her husband had built.

Then, “we began collecting frog eggs from the mountains where habitats were being destroyed, raising them, and releasing them farther away,” she says. Twenty ponds later, the couple has bred five different species of frogs, which they release into the wild upon maturity.

But first, she shoots them with a Canon EOS 20D and one of her assortment of macro lenses. “It took me a long time to master it,” she says. “It takes a lot of patience and practice.”

Person shoots macros not only of frogs but of other endangered animals, insects, and plants for nonprofit organizations, and for posters and calendars promoting conservation.

“I’d hate to see a world where all we have are photographs as reminders of what we once had,” she says. “My hope is that my images will have people thinking more about these issues.”

Want to save a frog of your own? Here are some of Person’s tips:

Wear rain gear. “Be prepared to get wet, dirty, and cold,” Person says. “Frogs are most active when the weather is wet.”Bring a headlamp. Frogs are also most active at night. Fortunately, their loud nocturnal croaking makes it easier to find them. A headlamp (available at camping stores for as little as $12) will help you navigate with your hands free and light your subject as you creep up on one.Rock and roll. If you’re handholding the camera, Person recommends rocking back and forth on your heels to focus instead of adjusting the focusing ring-a faster and more accurate method for a macro lens. If using a tripod, try a focusing rail.Diffuse your flash. You’ll need to use a flash at night, and a diffuser casts a more flattering light. For shoe-mount flashes, try a stick-on model, such as the LumiQuest Mini Softbox ($20, street).Set aperture-priority mode. Given the shallow focus of a macro lens, you should create as much depth of field as possible by using the smallest aperture you can-as little as f/22-to get the entire frog in focus.Start a frog sanctuary. Finding the critters is the hardest part, especially in the wild. If you have a pond or the space and resources to build one, try catching tadpoles and starting your own frog refuge.