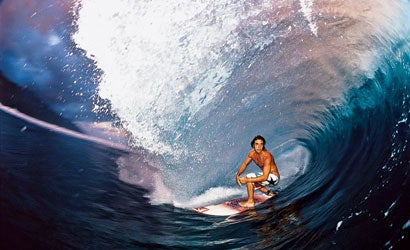 Surf photography may not be the most dangerous sports shooting, but it’s up there. Ask 38-year-old David Troyer, who fractured two ribs on a shoot near his home in Oceanside, CA. “We had a really big south swell. I was swimming and I timed it wrong,” he says. “The wave picked me up, threw me over the fall, and I came down with it. My camera cracked me pretty hard on the chest.”

Granted, not every surf photographer bodysurfs behind his subject, on a wave that might lift him 15 feet in the air and then slam him against a hard, sandy surface. “I’ve had stitches in my head from guys running me over,” Troyer says. “I wear a helmet now.”

But the San Diego native has been surfing since the age of 5, so when he developed a passion for photography, it seemed natural to combine the two. “After high school, I started traveling on surf trips — to Australia, South Africa, Indonesia — and documenting them with a camera. After that I didn’t really want to work a normal job,” he says.

With a film SLR and a zoom, he started shooting what surf photographers call “scenic” and “lineup” images — full-background photos shot from the beach. Later, with an underwater housing, he began to shoot close-ups in the water, at depths from 3 to 15 feet. He can’t get under water in a flotation device, so instead he treads water in fins. “I know what the waves and the surfer are going to do, so I try to time it so I can get inside the tube with them,” Troyer says.

He shoots film for his water shots, so he gets the full 180-degree angle of view from his 15mm fisheye lens. His Canon EOS 3 is wrapped in a custom housing and packs a power drive booster that lets him fire 7 to 10 frames a second of close-up action.

Troyer has worked as a staff photographer for Transworld Surf magazine; now, he freelances full-time. Despite the injuries, he wouldn’t trade his career for the world — the only problem is that photography has cut into his other hobby. “I haven’t had much time to surf,” he admits.

Want to shoot surfers without getting tubed?
Follow these tips from David Troyer:

1 Stay dry. If you can’t predict where a surfer or waves will go, you’ll break your underwater housing (or worse). Start with a tripod and telephoto lens on a beach, pier, or boat.

2 Go frontlit. “Shoot a beach on the West Coast in the morning — on the East Coast, at sunset,” Troyer says. From a pier, shoot relative to where waves are breaking. On frontlit, sunny days, he shoots 1/1000 sec at f/5.6, ISO 100. For backlit conditions, he opens up a half or full stop.

3 Study up. Watch surfers to learn their moves. “Aerial maneuvers are easy to predict,” says Troyer. “The surfer comes out the top of the wave to catch the board in the air.” These you can shoot from land; tube rides, from in the water. On location, talk to the locals. “Surfers want their pictures taken,” he says. “They can advise you on locations and conditions.”

4 Mind breaks. The three main wave breaks are beach breaks, point breaks, and reef breaks. “For water shots, I like reef breaks because waves will break more consistently in the same spot. I can predict where the surfer will be,” he explains. If waves are breaking against the beach, shoot from the shore.

5 Catch the wind. “You need offshore wind that breaks a calm wave,” he says. “Swell [rising wave] directions affect quality. Some beaches like a northerly swell; others, southerly.” Ask local surfers which one your beach likes.

You can look at more of David Troyer’s surf photography by visiting www.troyerimages.com.