Our technology editor explains why the terms dots and pixels shouldn't be used interchangeably, especially when it comes to describing a camera's LCD resolution. 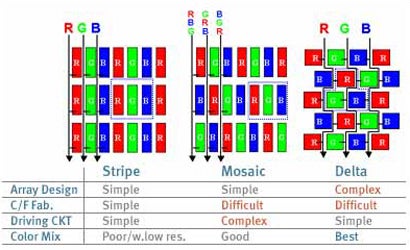 Since the beginning of digital time, photographers — and many manufacturers — have gotten confused over the differences between dots per inch (dpi) and pixels per inch (ppi). The terms are often interchanged — but they shouldn’t be, especially when it comes to describing printer or camera resolution. Why? A printer may use 6 or more dots (from individual color cartridges) to form the image of a single full-color pixel captured by a camera or scanner. This helps to explain why a digital file with 200 ppi res can be printed at 600-5400 dpi depending on the printer and its output settings.) Now it looks like we’ll have to add the way a camera or computer LCD monitor’s resolution is described to the never-ending saga of dots vs pixels.

Usually, maximum computer monitor resolution is listed in horizontal and vertical pixels. For example, a 17-inch laptop monitor might have a maximum resolution of 1280×1024-pixels (a very common resolution also called SXGA-Super Extended Graphics Array). On the other hand, most camera and camcorder LCD monitors are compared using the product of the horizontal and vertical pixels. For example, a camera with a 3-inch, 230,000 pixel resolution monitor (such the new Canon EOS 40D or EOS 1 Ds Mark III) gets that 230K figure by multiplying its vertical by horizontal pixel counts in the same way cameras often list their effective megapixel resolution by multiplying the sensor’s horizontal and vertical pixel counts. (However, to describe the unique Foveon sensor in its cameras, Sigma uses the total number of sub-pixels found in the three overlapping RGB layers to total the SD14’s megapixel count — a controversial practice.)

|| |—| | Comment on this article. Previous McNamara Report: Canon EOS 1DS Mark III: Medium Format Killer? | In the recent announcement of the Nikon’s D3 and D300 DSLRs, the resolution of the 3-inch LCD monitors on both of these cameras were described as either “Ultrahigh-definition [(920,000-dot VGA (640×480)]” or “approximately 920,000 dot (VGA).” Fortunately, Nikon added that VGA tag in all of its literature to clarify the meaning of the specification. Unfortunately, many reviewers missed that and erroneously thought that the LCD had a super-high 920,000-pixel resolution — which would make it twice as sharp as the 230,000-pixel monitors on the new Canons. (Remember, it takes 4x as many pixels in a two dimensional array to equal twice the resolution) But a standard VGA monitor has 640 horizontal x 480 vertical pixels, equaling 307,000 pixels — so how can a monitor have both maximum resolutions (920,000 pixels and 307,000 pixels)? Obviously, it can’t — and Nikon never said it did.

To get the 920,000 dot figure, Nikon multiplied the individual RGB dots (often called sub-pixels) used in the stripe array to form a full color pixel.

The math is easy: 640 x 480 x 3 = 920,000 dots. This is an accepted method of describing LCD resolution within the LCD industry, and it is approved by CIPA. To my recollection it hasn’t been used in the camera industry to describe LCD monitor resolution until now. Why did Nikon use this method? Perhaps because 920,000 dots sounds more impressive than saying 307,000 pixels, or perhaps because its engineers thought that was a more accurate way of writing out the spec? Either way, it describes a monitor with more pixels than any found on competitive camera LCDs (at least at the time of this posting).

Frankly, I wish Nikon would stick to the pixel method of describing LCD monitor resolution, or that all manufacturers would agree to use dots but then describe the actual horizontal and vertical pixel dimensions of the screen (as Nikon did by giving the VGA tag). Dots all folks.

For a more thorough description of LCD design, manufacturing techniques, resolution, and arrays (credited to Samsung Electronics, as is the array artwork in this article), go here.