Married to the Craft

A photographer's journey into the secrets of his art. 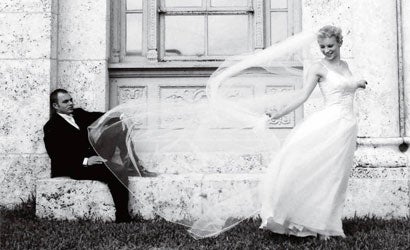 These pictures are the work of a famous wedding photographer, but they could easily be from a skilled pro shooting in any field: fine art, architecture, nature, or sports, for example.

Because this story isn’t about wedding photography. It’s about how a photographer gets to the top of the game, and about the passion for keeping current in a medium where fads, tastes, and trends change almost daily.

To learn how one artist does it, I fly to San Francisco and head through the colorful Chinatown district to the studio of Hanson Fong. Known for his portraits, wedding albums, lectures and seminars, and for his growing catalog of posing aids and instructional DVDs, Fong-he goes by Hanson-has mastered the reigning styles of wedding photography over the past 25 years, reinventing himself on a regular basis.

How does he do it so successfully? In the early ’80s, he came to several realizations that ultimately ensured his growth as a photographer. “First, I was brutally honest with myself and admitted that I couldn’t learn all the fine points of portraiture on my own,” he recalls. “If a bride and groom were attractive and expressive, and if the conditions were perfect with good lighting and picturesque backgrounds, I could pull off an okay wedding album.”

But if the bride was full-figured, the groom had a snarl for a smile, and the church had cinder block walls and fluorescent lighting, he was lost. To produce beautiful images when conditions were not, Hanson needed help.

“Over the years,” he continues, “a few really talented artists have been gifted with the rare ability to light and pose faces and bodies to make them most attractive. I knew that, basically, I wasn’t one of these geniuses, so it became my goal to find the masters and learn what I could from them. That’s the great thing about photography: It’s learnable.”

In the intervening years, Hanson crisscrossed the U.S. and Canada to take dozens of week- long workshops. His passion for learning is perhaps best revealed in his tutelage under the Redondo Beach, CA, wedding photographer Rocky Gunn.

“Rocky was known for what was called ‘outdoor bridal,'” Hanson says. “His forte was the formal wedding portrait done on location; it was rarely executed well back then.

“Before Rocky, most photographers would pose a bride at a park or in front of a sunset, where she would seem artificially superimposed against the pretty backdrop-stiff and out of place. When Rocky posed a bride outdoors, though, her body language and lines would reflect and amplify surrounding lines and shapes. She appeared to sweep though the scene as if she owned it. And she seemed part of the beauty, not just standing in front of it.”

Hanson had begun to formally study Gunn’s posing techniques, when the unthinkable happened: At 43, Rocky Gunn died of a sudden heart attack. Another photographer might have moved on, but not Hanson. “I asked myself, ‘How could someone that young have been that good?’ The answer came to me: He learned it from someone. I immediately started to track down his teachers.”

From Al Gilbert, Gunn’s teacher in Toronto, Canada, Hanson learned how to place a subject within an outdoor background and also how to work with wide-angle lenses in portraiture, a rarely used technique among commercial portraitists in the early ’80s.

Hanson then traveled to Guntersville, AL, where he took a workshop with the photographer who taught Gunn how to light outdoors, Leon Kennamer. The teacher had a developed a cult following for his fascinating and effective subtractive lighting techniques.

He used black panels to remove daylight from subjects (and thereby build dimension-creating shadows), rather than relying on ubiquitous white reflectors to bounce light onto subjects.It took Hanson the better part of a year, but eventually he learned most of Gunn’s techniques.

Hanson’s second realization about photography was that the learning can never stop. Tastes, styles, and technologies change and advance. “My wedding photography went from the traditional studio formals of the ’70s, to the outdoor and location portraiture of the ’80s, to the photojournalistic coverage of the ’90s, and, now, to the high-fashion look,” says Hanson.

It transformed over time from stiff and stilted to a more free, natural, unstylized look. “When photographers think they have learned enough, they are doomed to stagnation and outdatedness,” he says.

Whatever your genre of photography-whether it be sports, nature, scenics, or weddings-Hanson recommends that you explore new photographic influences. “Look for teachers whose work you admire,” he says.

“Each will probably have something unique to offer, and you’ll build a layered knowledge. It will be hard to pinpoint what you learned from whom, and what was your own innate ability or eye. You’ll combine the knowledge of others with your own instincts and sensitivities, to ultimately develop a style all your own.”