A couple of lessons from a visit with Panasonic. 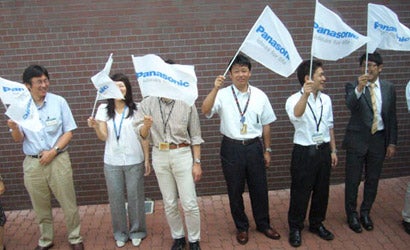 Osaka, Japan – You have to admire a country where airport security is handled efficiently (and courteously), where cab drivers wear white gloves (and accept credit cards), and where even the smallest nibble of food is treated as an art form.

Japan treats cameras very much as an art form, as becomes very clear when talking to engineers at Panasonic, headquartered in Osaka. I am one of about a dozen North American and European journalists who are touring Panasonic factories and talking to Panasonic people about design and manufacturing of Lumix digital cameras.

We should be able to tell you about some new Lumix cameras come late July. In the meantime, let me share a few things I’ve learned so far in our discussions.

Why you shouldn’t oversharpen (other than that oversharpening looks obvious and ugly): If you sharpen a picture overall, it can create an unnatural perspective by destroying a sense of depth in the photo. Objects at a distance are, in reality, less sharp than near objects due to atmospheric diffusion. If those objects are too sharp, they will seem to be closer, for an effect that our Debbie Grossman calls “Fakey McPhake.” This is why manufacturers have to be very careful in setting the sharpness in JPEG processing. Moral: If you must sharpen a landscape or cityscape in Photoshop or other image editor, do it selectively using layer masks. And do it little.

How sharp is your autofocus? Panasonic engineers gave a very convincing presentation on why contrast-detection autofocus (the kind that compact cameras and DSLRs in live view use — analyzing the image right on the sensor chip) is actually inherently more accurate than phase detection, the AF method used by DSLRs. Contrast detection, after all, analyzes sharpness at the pixel level, whereas phase detection is a sort of electronic rangefinding, evaluating wavelengths to estimate distance.
The disadvantage of contrast detection is that it is generally slower, particularly in lower light, and it is a tricky business to get contrast detection to track subject motion toward or away from the camera. Now that more DSLR makers are going to live view (including Panasonic, with its L-series cameras), engineers are working hard to overcome these drawbacks. Moral: If you really want critical focusing with your live-view DLSR, use live view to autofocus, or manually focus using a magnified area of the live view.

Now off to Yamagata. Let me leave you with this thought: You have to watch a Japanese chef make an omelet with chopsticks to really understand “digital manipulation.”