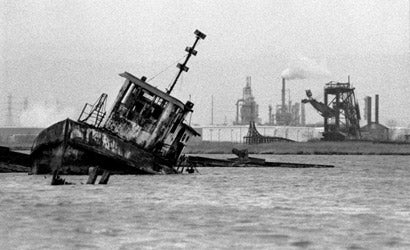 Of the innumerable photographs that have been made in the Antarctic, the vast majority have focused on its icy terrain and exotic wildlife. But it is the people who inhabit the world’s most inhospitable continent that interest Scott Sternbach, who was awarded one of this year’s eight Antarctic Artists and Writers Program grants from the National Science Foundation.

Sternbach, the director of the photography program at LaGuardia Community College in Queens, New York, will spend seven weeks this November and December photographing the “Souls of Antarctica.” He plans to make large-format black-and-white environmental portraits of the scientists that live at Palmer Station as well as the scientists and crew on board the ship that will take him there and the other grant recipients traveling with them. His idea is to examine the traits these people share and the way the Antarctic’s extreme environment is reflected in their appearances.

Since beginning his career documenting the last years of the great jazz generation, Sternbach has gone on to photograph prewar industrial sites and disappearing family farms in upstate New York, increasingly with 8×10 field cameras. He says he is interested in “capturing a lost way of life [and] commenting on the way humans have treated the environment.” Naturally, Antarctica is an ideal place to continue that exploration. “It’s pristine, and yet it’s being affected by everything we do,” Sternbach explains.

The Antarctic Artists and Writers Program grants are prestigious, but they do not include a monetary award. Instead, grantees are provided with access to Antarctica and the Palmer research facility, plus extensive training and logistical help completing their proposals. And needless to say, Sternbach will need plenty of help with his logistics.

At a recent planning session in Colorado, Sternbach discovered that the coastal weather at the facility will be very wet, not dry as he had originally thought. That bit of information will make a huge difference to his strategy for utilizing his vintage Folmer & Schwing 8×10 and Wisner Expedition 8×10 in subzero temperatures. For starters, he’s going to need a rain cover and lots of weight for the cameras to counterbalance the region’s high winds.

Even just getting himself and his equipment to Palmer Station, located on Anvers Island midway down the Antarctic Peninsula, will be a feat in and of itself. First he’ll travel 24 hours to the southernmost tip of Chile, then board the L.M. Gould research vessel for a six-day cruise through the Drake Passage, considered the roughest water in the world. Although much of his equipment will be shipped ahead of time Sternbach will keep enough with him to make portraits on the ship — and he’s researching which nausea medication will leave him in the best shape for work.

The National Science Foundation rigorously tests the grantees to ensure they are in good enough physical health to handle the strains of the Antarctic environment. Sternbach used to be a triathlete, but his training has dropped off in recent years. Now 50 years old, he’ll spend the summer cycling and swimming his way back into shape.

Sternbach also has to make sure his photography is up to speed — literally. He plans to work primarily with his 8x10s, and being able operate them quickly and efficiently will be a priority in the sub-zero temperatures. In the months before the trip, Sternbach will continue to work with the cameras and to audition students to find the one lucky assistant who will accompany him to the Antarctic.

When Sternbach first proposed hauling his vintage 8x10s to the Antarctic, the grant committee was skeptical. But he loves the quality of images the antique cameras produce and the rapport he builds with his subjects during the slow imaging process. Plus, he points out, these are essentially the same cameras the famous Antarctic photographer Frank Hurley used on expeditions in the early nineteen-hundreds. During the infamous Endurance trip, the boat was crushed by ice, stranding the crew for two years in the Antarctic – and Hurley recorded the entire ordeal using the finicky wet-plate process. “I’ve got it easy compared to those guys back then,” Sternbach insists.