Immortal Images: A Tribute to Photography and the Movies

Without photos, there would be no Hollywood glamour. And we need that glamour now more than ever. 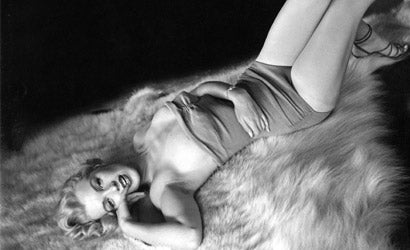 I found myself thinking about Norma Desmond recently. It happened while I was sitting at my computer, watching one of those TMZ videos of some Hollywood starlet stepping through a mob of paparazzi and climbing into her SUV. If you’ve seen one of these clips, you know just how interminable a mere 30 seconds can be. The guilt I felt afterward wasn’t about the work time I’d wasted but the fact that I’d bought into this imagery and its utter lack of imagination.

And that reminded me of the famous Miss Desmond, the aging silent screen goddess (played by real-life silent film star Gloria Swanson) in the 1950 film classic Sunset Boulevard. Confronted by a young man who vaguely recalls that she was once a “big” star, she replies, “I am big. It’s the pictures that got small.”

Sunset Boulevard was director Billy Wilder’s wicked commentary on Hollywood morality, but at its heart is a rueful admission (from this profoundly self-confident screenwriter) of the omnipotent power of cinematic imagery. “We didn’t need dialog,” says Desmond of her silent films. “We had faces!” Others have certainly shared Desmond’s fundamental outlook. In a 1957 essay called “The Face of Garbo,” photography critic Roland Barthes notes that the star of Queen Christina “belongs to that moment in cinema when capturing the human face still plunged audiences into the deepest ecstasy…when the face represented a kind of absolute state of the flesh, which could be neither reached nor renounced.”

In considering this cinematic ecstasy, it is not only possible but also essential to consider the still photo. The relationship between film and photography is both obvious and ambiguous. In 1937, Beaumont Newhall, founder of the photography department at the Museum of Modern Art in New York, wrote that “aesthetically, the moving picture and the still photograph are so independent that they cannot be compared.” It is tempting to think that photography, the older medium by some 69 years, was made obsolete by the rich experience of film. But in The Cinematic (Whitechapel/MIT Press, $25), a new anthology of essays about photography and film, editor David Campany wonders why films have so often featured still images.

“Perhaps film sees photography as something it had to give up in order to become what it did. Is it the photograph’s stillness that film finds so compelling? Its clarity? Its uncertainty? Its privileged status as record of memory?”

Aesthetics aside, the relationship between photography and film might better be described not as independent but interdependent. You only need look at the catalog for any recent auction of contemporary art — with work by Cindy Sherman, Richard Prince, and Philip-Lorca diCorcia — to see the cinema’s influence on photography. Without the movies, we might never have known such photographers as Laszlo Willinger, Clarence S. Bull, George Hurrell, Matthew Rolston, or Herb Ritts. And without those photographers we might never have understood the movies as we have come to, because to an enormous degree it was their brilliant work that transformed film’s fleeting impressions into a modern iconography.

To some extent, the relationship between film and photography can be traced back to a native of Cincinnati named Theodosia Goodman. Early in the last century, pioneering moviemakers weren’t aware that the actors in their productions might become widely known to the public. Then they began receiving requests from moviegoers for information and pictures of their favorite performers, one of whom was Ms. Goodman, whose stage name was Theda Bara. These actors became the first movie stars, their faces made epic by pictorialist photographers of the era who knew how to create an exotic ambience in their images. Along with the photos came fan magazines such as Photoplay and Motion Picture Story, which also sold photographic prints to the public.

By 1930 movie companies had set up large photo studios for in-house photographers. Hollywood’s Golden Age was also a golden age of Hollywood photography. Photographers like Hurrell and Willinger, as well as Herbert Mitchell, Ted Allan, and others, used 8×10 cameras and lots of light and shadow to sculpt faces into forms that weren’t merely beautiful, but perfect. Often, a young actor’s potential to be a star was judged by how well he or she photographed. “There were a lot of people who were stars only because of their still pictures,” said actress Loretta Young. “Their movies never meant anything.”

This era of idealized, dramatic imagery largely ended with World War II, and in the postwar era Hollywood’s great studio system broke apart. By the late 1950s the industry had reshaped itself with independent producers, actors, publicists, and photographers. More blatant sexuality appeared in movie imagery, featuring a new generation of stars like Marilyn Monroe. Photography itself changed with the widespread use of the 35mm SLR. When Life magazine went to the movies it featured a less formalized, more journalistic style of photography by people like John Florea and Bob Willoughby. By the 1970s another generation of photographers, including Douglas Kirkland and Terry O’Neill, began moving the aesthetic in a more glamorous direction, but their work remained essentially journalistic.

The 1970s saw an upsurge of interest in classic cinema. In 1977 George Lucas released his blockbuster Star Wars, which largely recast traditional Hollywood genres (especially Westerns) as science fiction. Meanwhile, three young photographers in Hollywood brought back the notion of Hollywood glamour, thereby creating a second golden age of Hollywood imagery. Matthew Rolston, Greg Gorman, and Herb Ritts channeled the drama of Hurrell and Bull, often shooting in black and white — a radical idea at the time. But they did not merely copy the masters; they infused their work with sexuality.

“By the end of the 1970s, conventional celebrity photography out of Los Angeles had gotten stale,” says Rolston. “New York photography dominated. Avedon, Penn, Scavullo. The Los Angeles photography scene was looked down on by the New York publishing establishment as some kind of tasteless backwater.” Rolston cites magazines like French Vogue and Andy Warhol’s Interview as being “extremely influential” in developing the new take on celebrity imagery. “Andy had a strong point of view, deeply rooted in a love for the Golden Age of Hollywood,” says the photographer. “Herb Ritts, myself, and others shared a retro point of view that caught the interest of New York-based magazines. That was the beginning of the resurgence of Hollywood glamour.”

By the ’90s, photographers were pouring into L.A. to build on the culture of celebrity established by Rolston, Gorman, and Ritts. Ironically, to some extent those three photographers moved on — Rolston becoming a fabulously successful director of music videos and Ritts redirecting his career into the art world.

Ritts died in 2002, marking the end of an era. To be sure, Hollywood is still filled with photographers of prodigious talent — James White, Art Streiber, Anthony Mandler, Sam Jones, and Sheryl Nields, to name a few. Yet no single photographer defines Hollywood imagery the way Ritts did.

“No one has ever replaced him,” says David Harris, the design director of Vanity Fair. “Herb made people look larger than life. He created icons. His pictures were elaborately set up. It was more about the way he positioned his subjects, the way he rendered them graphically. And it was the tonal warmth of the images, both in black and white and in color. When Herb talked about retouching his images, he would use words like ‘gorgeous’ and ‘dewy.’ He knew what he wanted.”

It is interesting to note that while Ritts launched his career in the late 1970s, it wasn’t until 1984 that he began producing the archive of celebrity imagery we know today. That was the year that Vanity Fair was redesigned under editor Tina Brown as a showcase for just such Hollywood journalism, creating a new cult of celebrity in America.

Today that cult seems ambivalent about its idols. The hot celebrity journalism can now be found in US Weekly, In Touch, and Star — tabloids rich in paparazzi imagery. Magazines like Vogue and Elle favor celebrity covers, but the focus there is on fashion. Then there is the photography to be found on Internet gossip sites. Today’s Hollywood imagery is often more ironic than iconic, content to charm us with humor and puerile sexuality. “It’s just bloodless,” says Harris.

Or perhaps after all it’s not the pictures that are smaller today, but the stars, who have never been more disposable. In an age of reality-television celebrity, when movies come on iPod screens instead of the silver screen, when Hollywood idolatry is defined by blogger Perez Hilton, movie glamour can’t mean what it once did. Let’s hope that it makes a comeback.