Images of the Year 2006: Personal Work 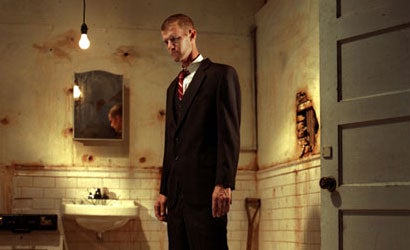 The photographs on these pages are open to interpretation, says their creator, Aaron Hawks. “I like to leave things up to the viewer,” he explains, “but I will say that they are representative of a relationship.” The image below depicts a precursor to destruction: “It’s like throwing oneself into a bomb-making room,” Hawks says, adding that the illusion was partly achieved with a set that he built sideways. “There was no Photoshop involved.” The picture at right is what Hawks calls “the aftermath — just a general feeling of loss.” Both photographs were made with a medium-format Hasselblad and about ten separate lights. Hawks, who studied photography at a community college in Seattle, hopes to make the transition to fashion and other commercial work, using skills in both photography and set building. “So far I’ve been pursuing personal work,” he says, “because I’ve just got to get it out.”