How To Shoot Star Streaks

Nature photographer Jim Brandenburg pulls an all-nighter to capture the music of the spheres. 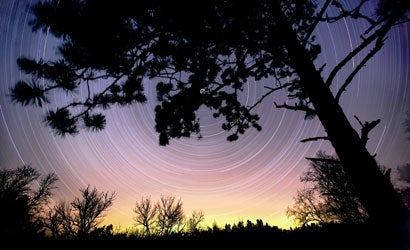 Known, to his chagrin, as “the wolf guy,” Jim Brandenburg spent only part of his life living with and photographing a pack of the wild animals. With a long career shooting for National Geographic and an honorary Ph.D. under his belt, the photographer, 61, now does much of his work in his own, huge backyard. You can see some of his wolf pictures, and more of his landscapes, on his website.

Q. What are we looking At here?
A. This picture was actually taken 10 feet away from my bed, out on the balcony. I have a house in Minnesota on the Canadian border north of Lake Superior, and I’m facing straight north. The North Star is the center point. It’s a 12-hour exposure taken Christmas night. I opened the shutter just when it got dark and closed it just before first light.

Q. If you’re facing north, why is the sunrise in the photo?
A. It’s not the sunrise — it’s the neighbors! There’s a house over a hill about a mile away, and they had a single light on. A little fog or mist or something like that must have come in, and even though you can’t see the light with the naked eye, over the course of 12 hours, that little bit of a glow appeared.

Q. Did you know it would look like this?
A. There’s always a surprise. The wind came up a little, and you can see the softness in some of the branches. Clouds can show up, too. You start out on a night when you think it’s going to be perfect, but something will happen. It has to be a fairly still, clear night to do this perfectly.

Q. What equipment did you use?
A. This was one of the first exposures I made with my Canon EOS -1Ds and 14mm lens. I set it at f/5, ISO 100. I was blown away by the quality compared to film; you don’t get color shifts like you used to. We used to use fairly high speed film to shoot at night. These are so much cleaner and purer. And you can see what your exposure is!

Q. Any advice for doing this at home?
A. It really helps to have total darkness. And be sure to focus on infinity. I tape the lens so I don’t move it. The trick is to go through all the motions where it’s nice and warm and light. Then just set the camera on bulb and click the shutter. I had the auxiliary power hooked up because in the winter the internal power isn’t enough. The longer the night, the longer the star streak. If you were up at the Arctic, and had 24 hours of darkness, you could complete the circle.