How To Shoot Cityscapes

Break away from the dark of night for great cityscapes. 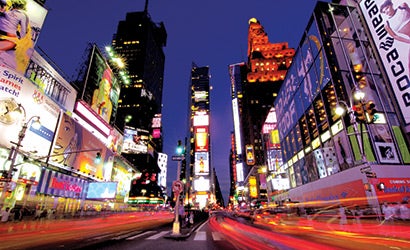 Many photographers believe that deepest, darkest night is the best time for a night shot of a city.

I disagree. I say the perfect time is the 10-minute period that begins about 15 minutes after sunset. This is when the sky is a dusky blue and the same exposure as the cityscape in front of it. Any later, and the sky goes black. Though some photographers like this effect, I find the pitch-black sky robs the photo of contrast and color separation.

Consider these two shots of New York City’s Times Square. The first was taken during that magical 10-minute window. The second, just 10 minutes after that blue-sky window had closed. Here’s how I shot them:

The Setup: I staked my claim to a piece of the sidewalk about half an hour before dusk. When the sun went down and the lights came on, I set up my tripod, dialed my Nikon D2x to ISO 640, and set the aperture on the 12-24mm lens to f/8. Then I pointed the camera toward the dusky blue sky above the city. I adjusted the shutter speed until I got a correct exposure.

But it was just 1/30 sec. At that speed, the traffic wouldn’t be the ribbon of red lights that we associate with night shots. Instead, each vehicle would be distinct, and it would look like a big traffic jam.

Slow the Shutter: To capture the motion, I like to go with the longest possible exposure time. From my experience with digital cameras, 8 seconds is about the maximum exposure time I can record before digital noise becomes an issue. Fortunately, 8 seconds is plenty of time for a shot like this, as long as you begin the exposure when the traffic is moving.

As the sun continued to drop below the horizon, I dialed the ISO to 100 and set the aperture to f/22. When I pointed the camera toward the sky, 4 sec was indicated as the correct exposure. That shutter speed gave me the red taillights that say “a city in motion.” And the blue sky provides depth and separation.

Time’s Up: Just a few minutes later, the dusky blue sky had vanished. And the second photo — shot at f/16 for 4 sec — has a dull black sky. The buildings are lost in the sky and image lacks the depth of the earlier composition.