How to Photograph Snowflakes

A dedicated photographer makes snowflakes hot - and shows you how. 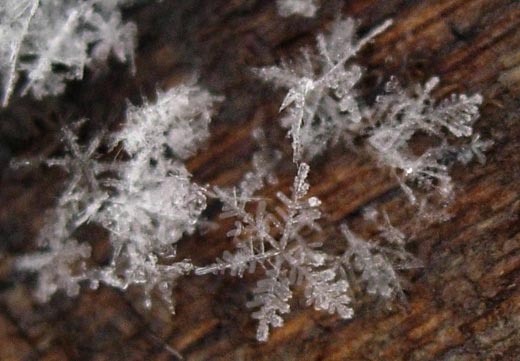 “No two snowflakes are alike.” It’s a phrase repeated so often that most of us accept it as fact. But, as Julie Falk points out, it’s not a scientific idea at all — it was simply a theory posited in 1898 by Wilson Bentley, the very first snowflake photographer, who captured close to 5,000 crystals in his lifetime.

“The idea has always fascinated me,” the 49-year-old schoolteacher, from Clinton, MI, explains. “So I decided to look for two that were alike.”

Unlike Bentley, who put snowflakes on slides and attached a bellows camera to a compound microscope, she uses a Nikon Coolpix 4200 point-and-shoot — a choice that may seem surprising, given that Falk is no novice photographer. She spent 10 years shooting professionally for a local newspaper. But she’s found the Coolpix 4200 convenient. “It seems to always know what you want to focus on,” she says.

Where Bentley posed his flakes on a black background, Falk shoots them as she sees them — “whether on wood, or stone, or on my shoelace. If they’re on other snow, there’s a way I can tilt my camera to catch the sunlight on that different flake.”

For the record, Falk hasn’t found two that are alike…yet.

• Get in as close as the camera will let you — usually about 2 inches. Hold the camera steady, and shoot from as many angles as possible.

• Aim for snowflakes that are on surfaces with clean lines and that are positioned at an angle so early morning or late afternoon sunlight can bring out details. And, Falk adds, “It also helps to find flakes in the ‘twilight zone’ areas of the snow — not in full sun nor quite full shadow — so the background of the sunlit flake is the cobalt blue shadow that snow has on sunny days.”

• Large, soft flakes photograph better than small, bright ones. Falk has found them at diameters up to 5mm. “You need to have a lot of moisture in the air,” she says, “and it needs to be bitter cold.”

• Nearly windless days are ideal for snowflake hunting, to up the likelihood of finding crystals intact. Colder temperatures help “to keep their little arms from melting off before you can get to them.”