How to Photograph Insects 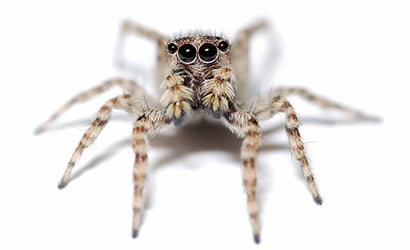 Christopher Badzioch proves that it’s not always the most expensive and specialized gear that makes a great photo — it’s the eye, vision, a sharpie marker, some electrical tape and a cheap homemade sweep that really matter when it comes to making amazingly detailed, dramatic insect “portraits.”

Badzioch, an amateur photographer originally from Opole, Poland and currently residing in Bristol, Conn., has been sharing his unique insect shots in the PopPhoto.com Reader’s Gallery and we are so impressed, we asked him to shed some light on his magical techniques. The photos in this story were all captured with basic macro lenses — not with bellows and rails or other super-advanced specialty gear — meaning with a little practice and patience, you too could soon be making your own dramatic insect portraits!

Getting Started: A Little Bit about Bugs

Learn a little about your subjects and their habits to know when it is best to capture photos.

• Getting close is very tricky, so knowledge of the environment is crucial in insect photography. Observe your subject carefully; try to see patterns in their behavior: do the honeybees like one particular flower in your yard best? Stake one out and wait for the subject to come to you.
• There is not just one bee or fly out there. Remember, you are surrounded by millions of insects every day and if the first one you see gets away, there’ll be another soon enough.
• Patience is the key. Think of insects like they are two year old kids running around without a break. But everyone, even bumblebees and toddlers eventually needs a break, so that’s when to make your photos. It may only last for a few moments, so be ready.
• Most insects are very sensitive to carbon dioxide, and will run or fly away if you breathe directly on them; however, certain beetles will freeze when breathed on — experiment!
• Early morning and twilight are the best times to make insect photos, as the cold-blooded creatures slow down when the temperature is lower.
• Insects can see shadows very well, so never approach your subject from the same direction as the light casts, or they’ll scamper.
• Spring and fall, with more dramatic temperature swings are prime seasons for insects. In the late summer and fall most bees will be totally focused on gathering as much food as they can to overwinter — meaning they’ll care less about you, and more about the pollen gathering at this time.
• Learning about your local insect and invertebrate population will help you to locate as many of them in their natural habitat, and also to understand their life cycle, so doing your homework is a big part of making successful photos.
• Be careful! Many insects and spiders can be dangerous, even deadly! If you are unfamiliar with a specific bug, it’s better to presume it’s got powerful venom, rather than find out the hard way.

• I prefer the “close focusing method,” which means that I set my macro lens to its maximum magnification setting and rather than spin the focusing ring or using autofocus, I move the camera back and forth and around the insect subject. With most macro lenses, this is the quickest way to achieve focus and get in close to the subject to avoid distracting foreground elements such as a stray blade of grass or a twig.
• You don’t necessarily have to be at maximum magnification to use this method, but you’ll want maximum magnification with 2x converters and maybe close-up filters for tiny ants, perhaps less for a big, burly beetle. In either case, it’s the quickest way to keep the subject in focus.
• Depth of field is razor-thin at wide apertures, so it is necessary to stop down to much smaller apertures (f/16-f/32) to have most of a small insect in focus.
• With such small apertures, it is necessary to add light to capture the scene under almost all conditions, but an on-camera strobe doesn’t provide pleasing light.
• I prefer shorter macro lenses in the 50mm range, rather than longer telephoto macros, to have more control over the environment by getting in really, really close, but it may be easier for the bug beginner with a slightly longer (100mm, for example) lens. Pay attention to distracting foreground elements, though, especially with longer glass.
• I shoot at low ISOs, usually ISO 100. Since all of the lighting is artificial, it makes sense to shoot at low ISOs for the best detail.
• Shoot at your camera’s maximum sync speed to minimize camera shake and to ensure that the strobe is the primary light source.

Onboard strobes and even macro ringlights tend to throw too much light at the background clutter, which takes away from the main subjects. But using an off-camera cord and some simple household supplies to modify your flash output makes dramatic “portraits” of insects with great directional lighting and background separation.

• Take a Sharpie (or other brand) marker cap and cut the end off — in effect, making a tiny snoot.
• Attach the modified cap to the center area on the diffuser of the strobe or ring flash with black electrical tape.
• Cover the entire flash diffuser surface with more black electrical tape, so that the only light transmitted will be through the marker cap.
• You’ve now got a highly focused beam of light that will spotlight your subject — from above, either side, or even partially backlit.
• If you are using a dedicated hotshoe connection, you can shoot (e)TTL exposure.
• With non-dedicated flash units or when using a PC-sync cable, you’ll have to set the flash manually. Distance to the subject and the strobe’s guide number will vary, so you’ll have to experiment to find the proper output ratio.
• Patience and practice will help you make dramatic winning shots. With this “spotlight” you’ve now got two items, the camera and the strobe, to position close to the subject — but once you get the hang of it, I think you’ll be happy with the results!
• I use this lighting technique and set-up for insects and microfauna, but the sky’s the limit! The macro spotlight technique can also be used for miniature collectibles, details of flowers, and whatever else you may shine you macro spotlight on.

You may have seen huge high-end studio set-ups with giant seamless backgrounds big enough to hold an SUV, which can cost a fortune. For the macro photographer, it’s a simple matter of making a smaller version yourself with some basic tools you likely already have in your shed and around the house. If this costs you more than $10, you’ve spent too much! (And depending on whom you live with, you may want to consider shooting these in the garage!)

Catching and Cooling Your Subjects.

• Make a holding container out of a glass jar and either punch tiny holes in the lid, or use a piece of cheesecloth and rubber band to hold your bugs in the jar.
• Insects are cold-blooded, so cooling them off for a few minutes in the refrigerator will slow them down and make them more relaxed subjects.
• Flies are easiest to capture early in the morning while they are still half asleep and cold.
• Nocturnal (night-active) bugs, such as beetles and moths, are generally attracted to lights, so take a flash light and place it on a table, cover it with white fabric and wait for them to come to you, then scoop up the cloth and drop the beetle or moth into your collection jar.
• Bees sting and can be very aggressive when agitated, so I do not recommend trying to capture them!
• If you are unsure if an insect or spider is dangerous, presume it is and be cautious in handling: use plastic forceps to move and catch the bugs — not your fingers!
• Once you’ve caught and cooled your subject, (which should take about 5-10 minutes, depending on the insect) you’re ready to make insect studio shots, but work fast — they’ll be active and run or fly away after just a few minutes.
• Your subject may be in the legs-in-the-air dead beetle position, but it’