How to Make Motion Blur Work for You

Controlling your shutter speed makes your action shots go from static to soaring. 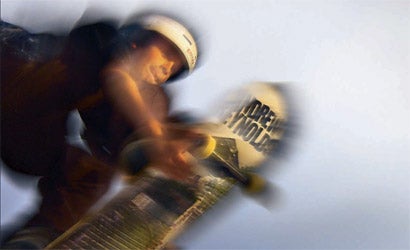 Admit it: Shooting a moving subject, your first impulse is to crank up the shutter speed. Most photo students learn to tackle sports or action with shutter speeds of 1/400 sec or faster. These speeds can (usually) freeze gymnasts in midair or football players colliding.

But lightning-fast shutter speeds aren’t your only option. Another strategy, known as panning or dragging the shutter, requires the opposite approach: drastically slower shutter speeds and following the subject with the camera during exposure. Doing this, and sometimes popping a flash, can keep key elements of your scene sharp while blurring other areas to visually suggest the motion that’s playing out before you. You can use your camera to artistically paint a scene that’s uniquely your own.

The skateboarders here represent just that. To decide which combination of shutter speed, panning, and flash pop worked best, I ran a range of shutter speeds, going from a conventionally fast 1/400 sec to an improbably slow 1/4 sec. I used the Canon EOS 20D with a Sigma 12-24mm set to around 12mm. In order to freeze facial expressions, I aimed an off-camera White-Lightning X3200 flash directly at the skateboarder’s face, sharply capturing the eyes, while letting the rest of the image blur as it might. An additional bonus of using flash: It let the background darken, drawing attention to my subject. You may wonder how I was able to shoot at 1/4 sec in broad daylight without overexposing the scene. Answer: A 3-stop neutral density filter and f/11 aperture.

Which slow shutter speed is best for action? Run a bracket and find out.

While these photos involved changing just one variable — shutter speed — the type and degree of motion blur generally depend on at least six variables: