Looking for off-the-beaten-path adventure and amazing photographs? You'll find them in Ethiopia. 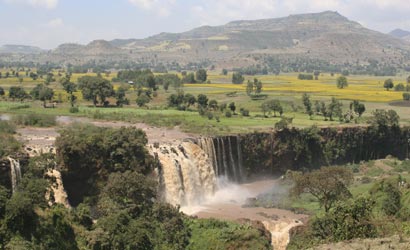 In the predawn darkness of 5 a.m., nearly 1,000 people stand in a circle, their white robes reflecting the glow of the candle that each holds. In the center, priests in elaborate, many-hued robes and huge pillbox hats lead prayers over a golden replica of the Ark of the Covenant. Suddenly, the priests turn and start walking. The faithful follow, candles in hand, chanting eerily beautiful prayers in a language totally foreign to Western ears. The procession winds around town as the sun rises.

If you’re getting the idea that this East African nation of 75 million is unusual, you don’t know the half of it. The only country in sub-Saharan Africa that wasn’t conquered by Europe’s colonial powers (aside from an uneasy occupation by the Italians during the Mussolini era), Ethiopia marches to its very own drummer. And that’s what makes it such an amazing place to photograph.

The civil war and famine of the late 1980s, as well as more recent battles and saber-rattling with the breakaway state of Eritrea and fighting in neighboring Somalia, have put Ethiopia far down most travelers’ “must-see” lists. Right now, however, there’s peace, and the country is welcoming visitors to explore what is one of the world’s richest — but most unsung — historical troves. An invitation from Ethiopian Airlines brought me there, along with six other journalists. During my six-day visit, I found it to be one of the most exotic, fascinating, and photogenic places I’ve ever seen. Granted, it is a destination only for hardy travelers. Those visitors don’t mind getting inoculations before they leave home; won’t forget to take their malaria-fighting pills; and can cope with hotels that sometimes run short of hot water, or water altogether.

This is one of the poorest countries on the planet. To the scores of Ethiopians walking along any road in the countryside, as they carry jugs of water on their backs or bundles of firewood on their heads, a passing car or truck is a head-turning novelty. Many of the people outside the capital of Addis Ababa — and in the city, too — don’t have shoes; wear cast-off clothes from Europe and North America (assorted rap stars, colleges, and softball teams are represented on the ubiquitous T-shirts); and they are rail thin. And AIDS is a real presence.

Yet the fields are green, the food seemingly accessible, and the people very lively and friendly.

If I had been there only to encounter the people and photograph them, I could have easily filled my memory cards with great shots and left happy. After all, wherever we went we drew a crowd of kids eager to try out the English they study in school and clamoring for whatever I might have to give them. (“Pen, mister, please. Pen.”) But the adults weren’t grumpy or camera-shy. They found us as intriguing as we found them. All it took to get on their good side was a smile, a wave…and, okay, sometimes a pen, pencil, or a few birr (the local currency, worth about 12 cents each).

But there is much more to Ethiopia than just fantastic faces. There also are enough historic buildings, monuments, and artifacts to rival any place on the tourist-and-postcard circuit. The greatest concentration of sites is along the “Historic Route” that loops around the northwestern side of the country.

After a night in Addis Abba, a short flight took us to Bahir Dar on the shores of Lake Tana. This huge, milk-chocolate-colored lake is dotted with islands and peninsulas that are home to more than three dozen monasteries that are still in use by Ethiopian Orthodox Christian monks. Take the ferry around the lake, and you can get up close to the mummified remains of emperors from the 13th to 17th centuries in the mausoleum of the Daga Istafanos monastery. Too creepy? The beautifully painted murals in the churches of the region present more mainstream photo ops.

Five hours away lies the city of Gondar, with more painted churches and a compound of 17th century palaces that stand to remind visitors that Ethiopia was once a powerful and sophisticated empire on the Red Sea. The emperors’ lion cages and a clever sauna chamber wrought from stone give you the feeling that this isn’t so much a museum as a recently abandoned ghost town.

The city of Axum, too, may be ancient, but it has a freshly discovered feeling. Archeologists estimate that just a tiny fraction of the area’s history has been uncovered. Still, there is plenty to see. There is a field of ancient stelae — towering obelisks that emperors built to signify their power. Nearby are the underground tombs of emperors; go ahead, walk in and explore. A short drive away are the ruins of what’s said to be the Queen of Sheba’s palace.

This city also is something like the Vatican City of Ethiopia, with the beautiful painting in the St. Mary of Zion Cathedral, and a nearby building that houses what Ethiopians believe is the Ark of the Covenant, the container in which Moses brought the Ten Commandments down from the mountain.

Are Axum and Gondar and the other cities impressive? Yes, but it all pales in comparison to what you’ll see in the remote mountain village of Lalibela. Named for the 12th century king, this village is home to a series of churches that were carved into the stone mountains. As much art as architecture, these stone churches are set below ground level, since they are carved out of the stone. They are, in effect, sculptures, since most are not made of pieces, but wrought from a single huge piece of rock. And while certainly not as large as the cathedrals of Europe, these churches are several stories high and are elaborately carved.

As with most other sites in this country, the stone churches of Lalibela aren’t being exhibited, they’re being used. The typical museum’s ropes, gates, and display cases are virtually nonexistent in this country. When I was there, about all that was under glass were the remains of Lucy, the 3.18-million-year-old skeleton found in northern Ethiopia in 1974. I saw Lucy in the national museum in Addis Ababa, but she was reported to be on her way to the U.S. for a multi-city museum tour.

Everything else is before you, as though you’re the first visitor to see it. Eight-hundred-year-old manuscripts? They’re dragged out and paged through like family photo albums. Ancient crosses and the crowns of long-gone kings? They’re yours to photograph.

While Ethiopia is an incredibly tough place to explore on your own, getting there isn’t hard at all. Ethiopian Airlines (www.ethiopianairlines.com; 800-445-2733) has four flights a week from Washington, D.C.’s Dulles International to Addis Ababa. It’s a 15-hour flight with 90 minutes in Rome for refueling. Don’t let the country’s reputation for poverty scare you off the airline — it is thoroughly modern (Boeing 767s) and quite efficient. Round-trip coach airfares were running between $999 and $1,800 when I checked.

No matter how independent your spirit, you will need guides and someone to set things up locally. A good bet is Addis Ababa-based Green Land Tours (www.greenlandethiopia.com). This company has the experience and size to take care of everything from guides to hotels to in-country transportation.

In any case, you can find out more about the country from the tourist board at www.tourismethiopia.org.